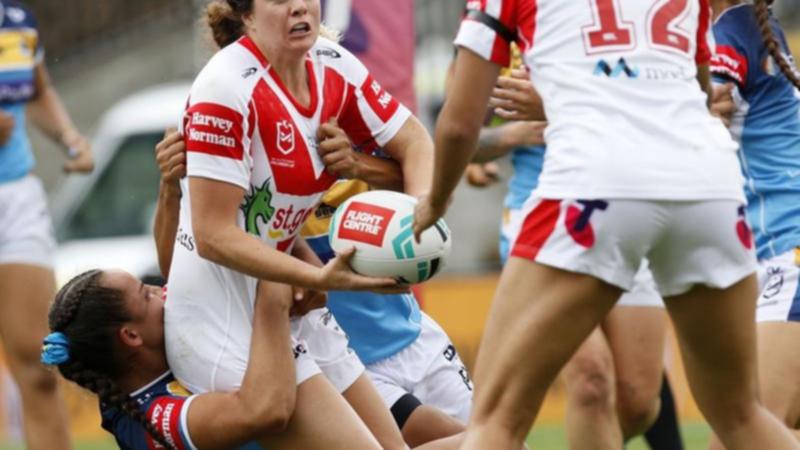 It was a life-changing punt from Rachael Pearson three years ago that gifted St George Illawarra the NRLW’s greatest boot.

Playing League Tag in her hometown of Hay, Pearson made the call to quit her full-time job, move 700km east to her brother’s spare room in Wollongong.

“I’d sort of done everything I felt I could with League Tag. I was 25 or something like that and I thought it’s now or never.

“I decided I’m either going to stay comfortable, or put all my eggs in one basket.

“Move from a job that I love, a hometown I was comfortable in and go away from everything I know to go live in my brother’s spare room.

“And just go play tackle. I decided I was just going to chase this football thing.”

The fact Pearson will be one of the key players in Sunday’s NRLW grand final against the Sydney Roosters in her rookie season shows her punt on ability clearly paid off.

After her dream was ignited by the Jillaroos’ 2017 World Cup win, she spent 2018 sidelined at home with a foot injury before taking the leap of faith.

With her coach back home she researched the strongest clubs in the Illawarra, before landing at Helensburgh in the NSWRL Premiership alongside the likes of Kezie Apps who she’d watched two years earlier.

“I spent a year up here with no job,” Pearson said.

“I’d obviously saved. Just thought I’m going to give it all to football.”

Pearson has since taken up a trade working in the mines as a fitter machinist, but could have more football to focus on as a chance to feature as NSW’s halfback in this year’s State of Origin.

She is also favoured to overcome a back injury to play in Sunday’s decider at Redcliffe, after missing the final round and battling through the semi-final win over Gold Coast.

Her long punt on the field has often been the difference for the Dragons in turning opponents around, with the daughter of an Aussie Rules player now guided by noted kicker Jamie Soward and possessing one of the longest boots in the game.

“Dad just taught me the drop of the ball,” Pearson said.

“I always grew up kicking a footy with him. “I’m probably known for the kicking game now, the extra 10 metres can be a couple of tackles in your favour.

“So it obviously paid off.”