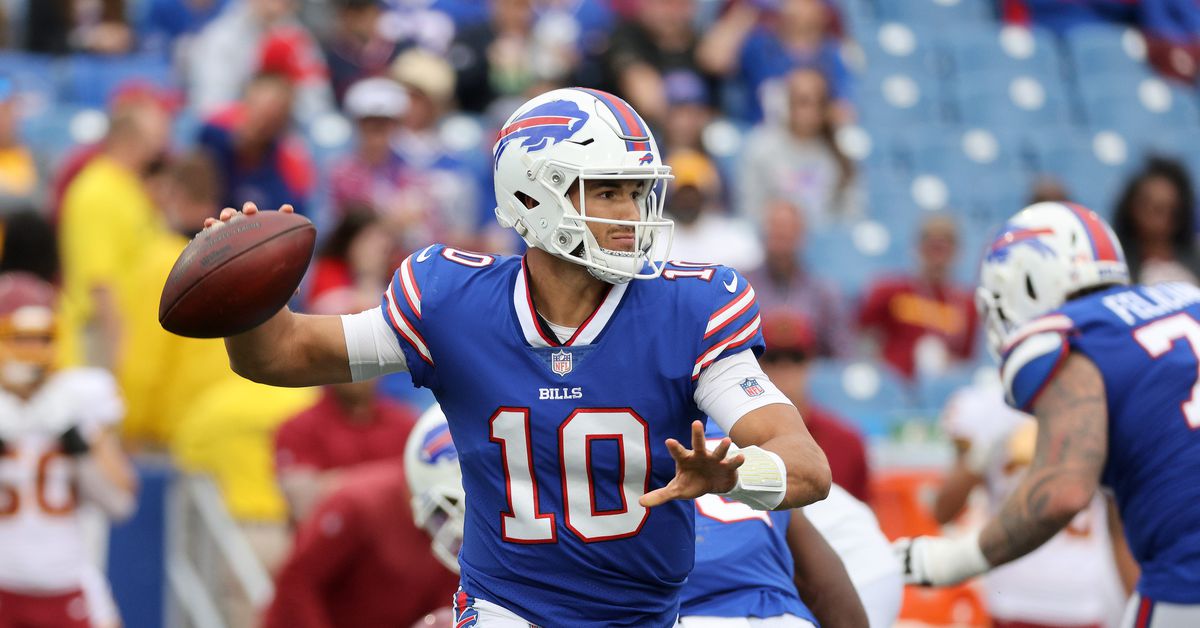 The NFL free agency period doesn’t begin until March 16, but we already know who the big winner is going to be. Mitch Trubisky won’t be the highest paid signing this year, but a dearth of QB talent and plenty of needy teams will cause him to earn far above his market value.

It’s reached an absolute fever-pitch surrounding the former Bears QB, to the point that some truly ludicrous comparisons are being made, including this from NFL.com.

“Statistically in Years 2-4, Trubisky compares favorably to the likes of Peyton Manning, Ben Roethlisberger and Philip Rivers at that point in their careers.”

Trubisky is no longer a Hail Mary QB signing, he’s being compared to Hall of Fame-caliber players. It’s silly season, and nothing is sillier than this. We won’t know for sure how high these bidding wars will go, but we do have some ideas. ESPN’s Jeremy Fowler said Trubisky’s name is one of the hottest in the market, and that could easily lead to a team paying upward of $10 million per season.

On the surface that might not sound like a lot for a starting QB, but it’s tremendous for a player who last made a paltry $2.5 million serving as Josh Allen’s backup in Buffalo. It’s even more incredible when you consider that Trubisky didn’t really do anything of note, outside of a play for a stable franchise.

There’s only one real game that showed signs Trubisky could still be an effective starting quarterback, and that came in Week 2 of preseason in 2021. Dubbed the “Trubisky Revenge Game,” this was Mitch returning to Chicago to face the Bears, tearing them up by completely 20-of-28 passes for 221 yards and a touchdown. It was a nice performance, sure — but is that really enough to justify a huge contract? It is, only because teams believe it is.

To be fair, it’s less about that one game, and more a perception that the Bears were incompetent with their handling of the former No. 2 overall pick. That’s probably a fair bet, but it also requires a hell of a leap of faith.

If we assume Trubisky makes $10 million a year (and honestly, it could go a lot higher) then it’s over double what Teddy Bridgewater made signing with the Broncos last year, almost three-times what Marcus Mariota made. Both players are far more proven commodities than Trubisky, but desperation causes strange bedfellows. Make no mistakes, there are very desperate times for QB-needy teams. The Steelers and Saints are trying to recover from the retirement of their Hall of Fame caliber QBs, the Giants aren’t 100 percent sold on Daniel Jones (and rumored to be interested in Trubisky), the Seahawks need a new QB after trading Russell Wilson, the Colts are looking for a passer too, and the Panthers, well, they just sign QBs for fun at this point — even if it goes poorly.

Compounding these issues is a soft draft at the position. Even the most stalwart fans of the 2022 QB class admit that all these players need seasoning. There is no evident Day 1 starter, outside of maybe Kenny Pickett, though he has in own concerns about hand size, attitude, and ability to translate his game to the NFL. The most promising prospect, Malik Willis, is absolutely not ready to take over a franchise immediately — and his success will likely hinge on landing with a safe, stable organization where he can sit for a year or two behind a proven QB, to learn not only an NFL offense but get important reps in practice against NFL competition.

Should the gamble be right, and Trubisky really was simply a case of landing in the wrong place at the wrong time, then $10 million a year is a relative steal for a starting QB. However, that feels more like a prayer than a plan — and the teams needing passers right now need solid plans.

There’s also a case to be made for doing both. This would involve signing Trubisky to a short-term deal, while also drafting a QB to wait in the wings. This would be a best of both worlds play, which could satiate fans immediately, while also having a tangible plan for the future. It would also allow Trubisky to show what he’s made of as a starter in a new situation, potentially getting another big contract at the tail end for his trouble.

No matter what happens next, it’s a hell of a good time to be Mitch Trubisky. It’s only getting better as teams trade away their starters. With Rodgers returning to Green Bay teams will now look to the next best thing on the market, and that very well could be Trubisky. He’s found himself moving from being an afterthought, to front of mind — and the dude is going to get paid.