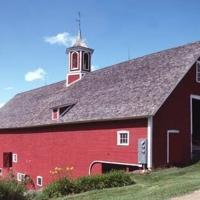 In the 1800s it was common for people to make their own paints by mixing pigments with linseed oil made from flax seeds and other ingredients. Pigments are dry materials that add color. They were available in various hues, but the tint we see so often on older American barns was called Venetian red.

According to the 1884 edition of “Everybody’s Paint Book,” by F.B. Gardner, Venetian red was “suitable for any common work, or for brickwork and outbuildings.” This red pigment penetrated well into wooden barn boards and resisted fading when exposed to sunlight, so it could age gracefully for generations.

Venetian red got its name because historically this pigment was produced from natural clays found near Venice, Italy. The clays contained an iron oxide compound that produced this red color.

But as people found similar iron oxide deposits in many other places, “Venetian red” became a generic term for light red pigments that did not have any purplish tinge. By the 1920s, such “earth pigments” used to make red paints were being dug in Georgia, Pennsylvania, Virginia, Alabama, California, Iowa and Vermont.