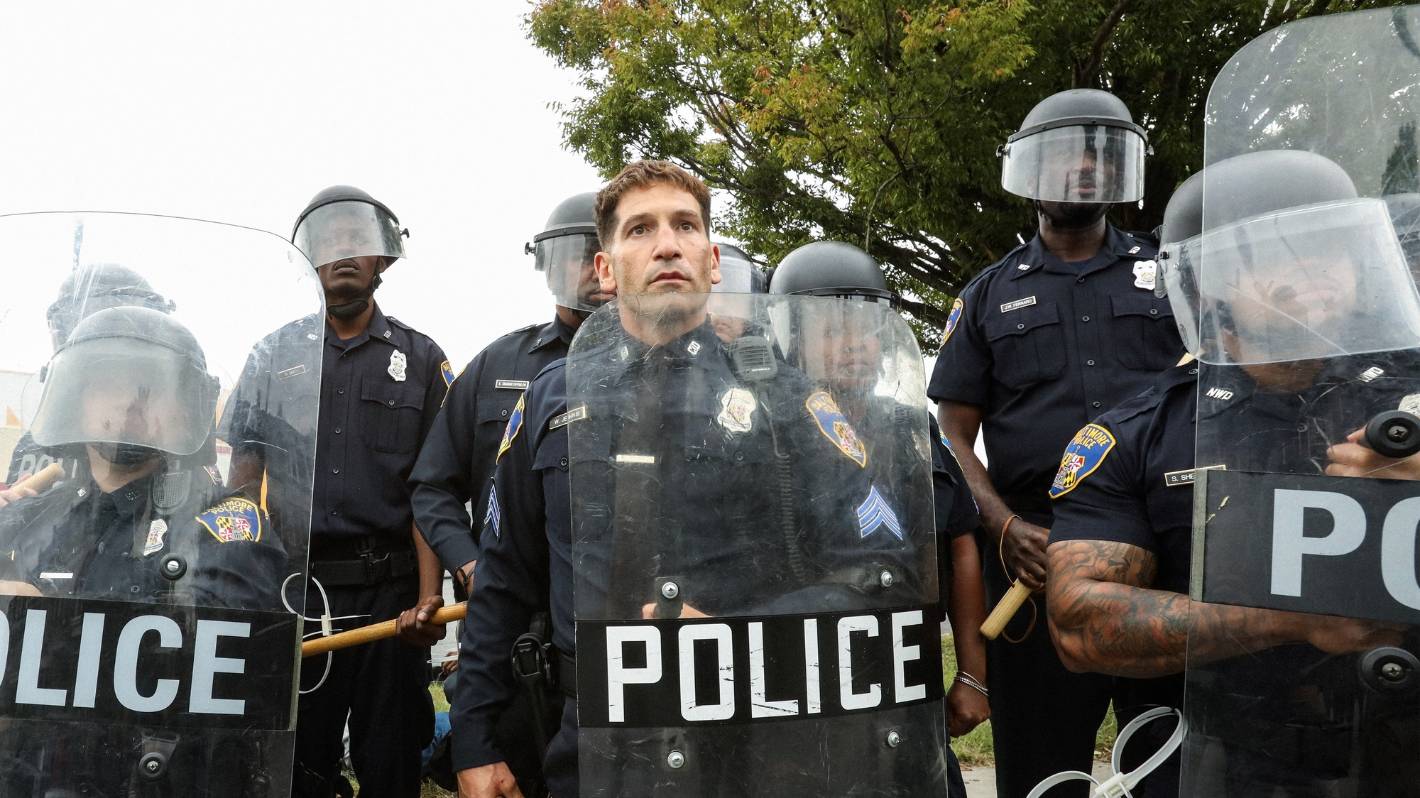 REVIEW: After side-trips to 1940s New Jersey and 1970s New York in The Plot Against America and The Deuce, David Simon is back on more familiar turf with his latest series.

As with The Corner and the groundbreaking The Wire, Baltimore is the backdrop for the six-part We Own this City (which has just dropped on Neon and Sky Go).

Based on Baltimore Sun crime reporter Justin Fenton’s 2021 book of the same name, it is, as his tome’s subtitle suggests, the dramatisation of a “true story of crime, cops and corruption in an American city”.

Specifically, it details the rise and fall of the Baltimore Police Department’s Gun Trace Task Force, a group lauded as the answer to the city’s rising tide of violent crime, held up as an example of modern less-confrontational policing, but who, in truth, were seemingly rotten to the core.

READ MORE:
* Doco examines police brutality and death of African-American Freddie Gray
* Baltimore protesters turn tables on media: ‘No excuse’ for cop violence either
* The Wire, the burning of Baltimore and the limits of art

Central to their operations was Sergeant Wayne Jenkins (a fabulous Jon Bernthal). When we first meet him, it’s January 2017, and he’s lecturing his colleagues on brutality. While acknowledging the mantra that “if we lose the fights, we lose the streets”, Jenkins warns them about the fights “you think you’re entitled to because you’re wearing a badge”.

“That’s the real brutality. That kind of brutality only gets in the way of you doing your job. No one is going to tell you what you need to know if you’re beating on them. Information is what will get you cases…If you understand your own authority, know the law – you win.”

It’s a powerful speech, one that resonates even more by the end of the show’s first hour. After haunting opening credits that offers up still and moving real-life images of altercations, arrests gone awry and cops behaving badly, we flash forward a month to the cocksure Jenkins lording the success of an operation over his homicide department “rivals”. “I was born to do this,” he boasts to an old colleague from his training days, adding that he would never contemplate retirement.

But despite his definition of success, Baltimore is still viewed by many as “the poster child for the basic failure to stop lawlessness”. The death of Freddy Gray while in police custody in April 2015 led to public protests and civil disobedience, with six officers suspended and investigated for their actions.

Subsequent police reluctance to make arrests in tense situations, or where crowds were gathered (“the iPhone is no friend of the BPD,” one character notes), coincided with a spike in homicides, forcing the mayor to relieve the police commissioner of his duties and her to not seek re-election. None of this fazes Jenkins. “I’m not worried about ending up on some viral video – with a little more personnel and a lot more overtime, there’s no telling what impact we could have on the surge of violence in this city.“

As with his much-loved The Wire, it’s Simon and regular co-writer George Pelecanos’ forensic and multi-faceted approach that appeals and stands-out. There’s an authenticity about the drama – focuses on small procedural details (warrants that taking longer than they should to file because of misspellings) and shaded, nuanced characters (drug dealers here range from slick operators to the truly sloppy) – that means this feels far more like America’s answer to Line of Duty than its traditional police procedural fare.

Of course, casting helps. And as well as Bernthal, there are also terrific performances from Nigerian-born British actress Wunmi Mosaku (Luther) as a Department of Justice Civil Rights Division attorney and an almost unrecognisable Josh Charles. Fans of The Good Wife’s Will Gardner will be in for a shock as a paunchy looking Charles essays repellent, racist Baltimore police officer Daniel Hersl.

Not a light watch, We Own This City is show that demands your attention, King Richard director Reinaldo Marcus Green doing a great job of corralling the sometimes sprawling story (this could easily have been multiple series) into compelling, riveting viewing.

We Own This City is now available to stream on Neon and Sky Go.