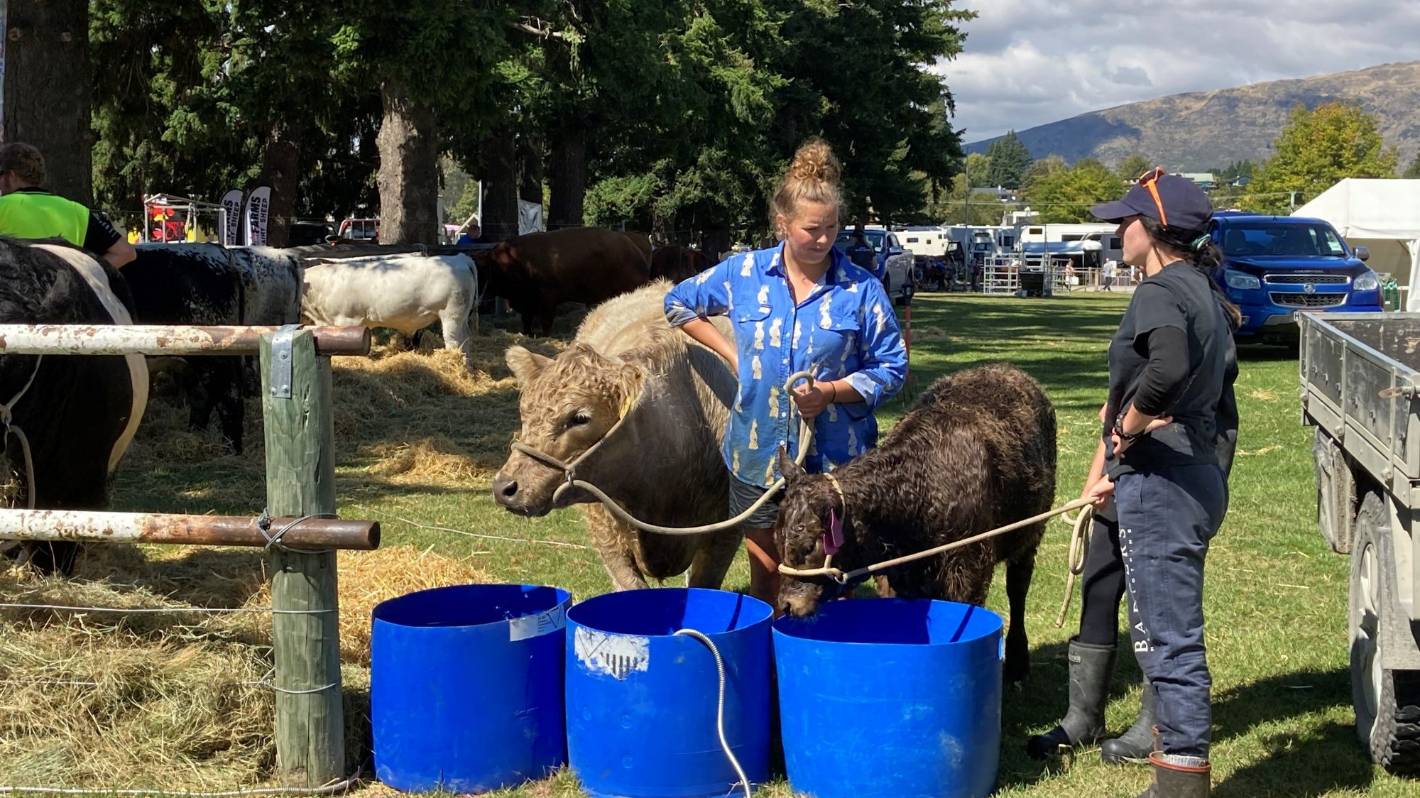 Bulls rehydrate on a hot day at the Wānaka A&P Show. Next year’s event is still going ahead – at the moment – despite others cancelling over Covid concerns.

The Gore A&P show is the latest to close the gates on its 2022 event due to uncertainty over Covid-19, but the show will go on at Wānaka, cancellations elsewhere making it now the country’s biggest show.

The Wānaka show will be one of just a handful of A&P events still to run in March and again will be a life-saver for rural communities and exhibitors, as it was earlier this year.

After the country’s biggest A&P show, the New Zealand Agricultural Show in Canterbury, Wānaka reels in the largest crowd in the country. The Canterbury show, which was meant to have run earlier this month, was cancelled for the second time in two years, 2020 the first cancellation since World War II.

Wānaka organisers decided on Tuesday to continue planning for the show, which will host thousands of people, Covid-19 permitting.

“We put the Wānaka A&P Show on for the community, first and foremost. If we don’t run the event so many people lose out.

“We do feel a sense of duty to see the show go ahead as it always does, so that trade exhibitors can make money, guests and competitors have fun and people can fundraise for their causes, through volunteering at the show.”

Last year four people infected with Covid-19 who were at the World Hereford Conference in Queenstown – which was eventually associated with a Covid cluster of 17 people – went on to the Wānaka A&P show, an event which attracted 20,000 visitors.

Stalker said the health of the show’s vendors and visitors would be at the forefront of any decisions around cancellation, and Covid-19 vaccination certificates would be needed.

“The health and safety of our community is paramount, so if it’s deemed unsafe to run the event, we will of course review our plans.

With Gore’s event falling over on Monday night, it joins other casualties of Lake Hayes in Queenstown, Wyndham, Winton, Stratford in Taranaki, Rangiora in North Canterbury, Hawke’s Bay, Gisborne, Clevedon, Waikato, and Wairarapa shows – as well as the South Canterbury Spring Horse Show.

The Nelson/Marlborough A&P show went ahead at the weekend, but with no exhibitors and for members only.

In Otago the Maniototo and Central shows are to still to take place. The Lake Hayes A&P Show in January was cancelled last week as the committee decided the risk was too high.

Gore A&P show secretary Rebecca Paterson was disappointed the southern event’s 140th show had to be cancelled, but said it was the right decision for the community, given the uncertainty.

Waikaka farmer Rob Hall has been exhibiting sheep and cattle across the south for more than 40 years.

He said it was disappointing to see so many organisers pulling the rug underneath show exhibitors and visitors.

“I am really disappointed – I have exhibited every year at Wyndham since 1978. It was my first show.

“I think for a lot of the organisers there is not a clear rule to say they have to shut down. The Government aren’t telling the A&P’s to shut down, it is just the A&P organisers are nervous because they think if there is an outbreak, they will be the ones carrying the can.”

In the south there will be no more A&P shows this side of Christmas, though a pared back version of the South Otago show will run this Saturday.