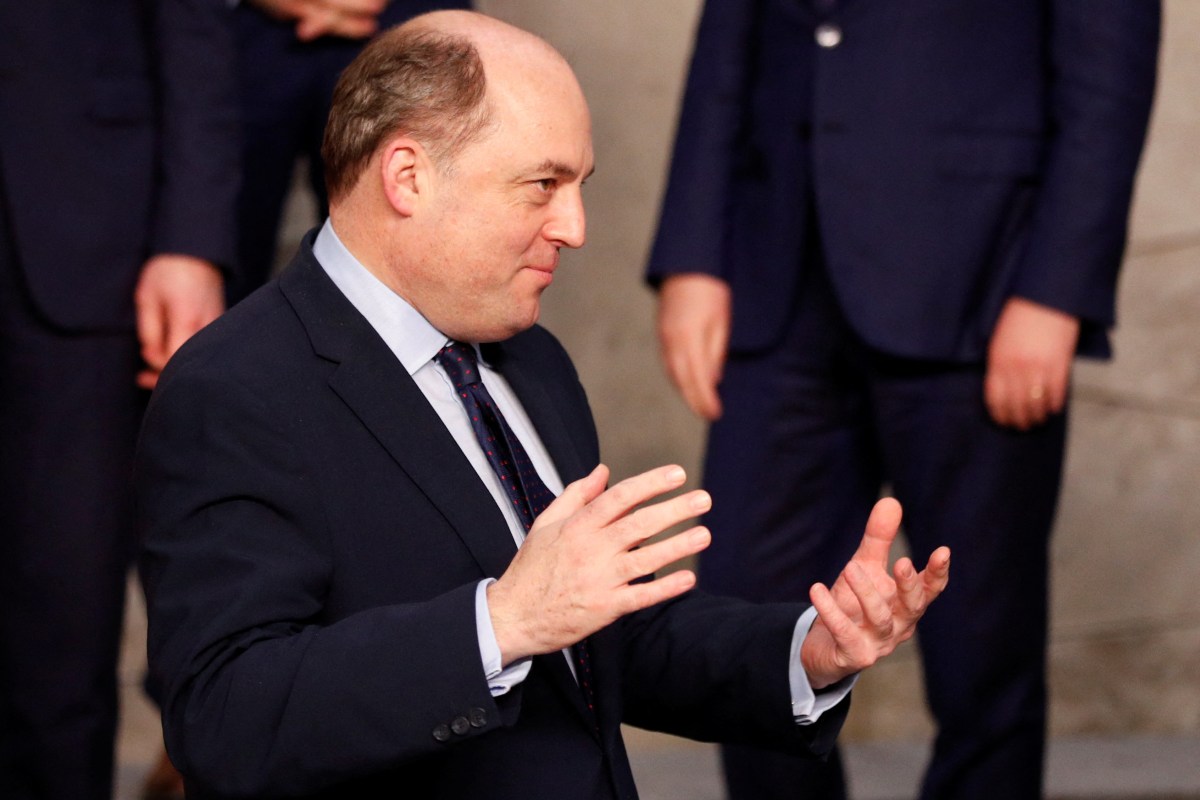 VLADIMIR Putin will be following in the footsteps of Hitler if he presses ahead with invading Ukraine, Ben Wallace blasted today.

The Defence Secretary said an attack on Kyiv would be the biggest land grab in Europe since the Nazis unleashed the Second World War.

His remarks came as Boris Johnson warned the Kremlin is already using “false flag” operations to justify sending its troops in.

The PM warned the Kremlin it would have to be “mad” to start a war in Ukraine which would be a “catastrophe for the world”.

Mr Wallace also raised the alarm about Russian aggression whilst speaking on the sidelines of a NATO summit in Brussels.

He said: “This is really about what is the consequence of President Putin invading Ukraine and achieving it?

“There is a consequence right across the border from the Arctic to Turkey, which is an emboldened President Putin.

“If he does invade Ukraine, he is grabbing territory in a way that we haven’t really seen since the Second World War.”

The Defence Sec said such a development “will worry everyone” but especially newer NATO members in Eastern Europe.

He acknowledged that Brits will also feel the squeeze through higher prices for food, petrol, and energy if Russia invades.

The combination of supplies from Ukraine being knocked out and sanctions on Moscow would heighten the cost of living crisis.

Mr Wallace issued a rallying cry for Sun readers and patriotic Brits everywhere to stand up for freedom whatever the cost.

He said: “There’s always been a price for the freedoms we enjoy and we’ve been very lucky that for the last few decades that price has been low.

“Freedom comes sometimes at a price, but it’s a price that we have always been prepared to pay in our history.

“The reality is there will be a consequence as a result of this, it’s why we don’t want it to happen.

“But the world is more insecure anyhow. Sun readers are decent, patriotic people who stand up for values and freedom.

“They will recognise the freedom they enjoy is bought at the cost of men and women of British armed forces doing their job right now.”

His remarks came as the PM accused Putin of “blackmailing” the West and said he’d be “mad” to invade Ukraine.

Boris warned an attack on Kyiv would be a “catastrophe for the world” as he urged the Kremlin to step back.

And he made a direct plea to ordinary Russians to put pressure on Moscow to avoid huge bloodshed.

Speaking from RAF Waddington in Lincolnshire, he said Europe must end its dependence on Russian gas.

He said: “We can’t be blackmailed this way by Vladimir Putin – we’ve got to end that.

“I just want to say one thing finally about what’s happening in Ukraine – there is still time for the Putin regime to step back.

“If Russia were so mad as to invade, I don’t think people should imagine that this would be a brief business.

“This would be a bloody and protracted conflict in which, I’m afraid, there will be many casualties and including many Russian casualties.

“I just hope that people in Russia can see that.”

If Russia were so mad as to invade, I don’t think people should imagine that this would be a brief business

Putin has sent a further 7,000 soldiers to the Ukraine border, beefing up the 150,000 troops already massed in a dramatic escalation of tensions.

The act of aggression came after a breakthrough appeared to emerge amid reports Putin was ordering some of his troops back to base.

But a U.S. official slapped down the Kremlin’s claims, insisting: “We have now confirmed that in the last several days, Russia has increased its troop presence along Ukrainian border by as many as 7,000 troops, with some arriving as recently as today.”

CRISIS ‘COULD DRAG ON MONTHS’

British Foreign Secretary Liz Truss today warned the crisis could drag on for months and it was essential not to be “lulled into a false sense of security”.

Western intelligence is increasingly warning of a “false flag” plot to give Moscow a pretext for war.

Mr Wallace said scuppering these attempts were the best way of averting a fully-fledged invasion.

He said: “If you expose sub-threshold activity like false flags or plots, if you reveal them, you tend to pop the bubble off.

“I mean, you look rather stupid if you then go ahead with them having been exposed.

“Sunlight does damage these sorts of conspiracy plots that are often part of the Russian playbook.”