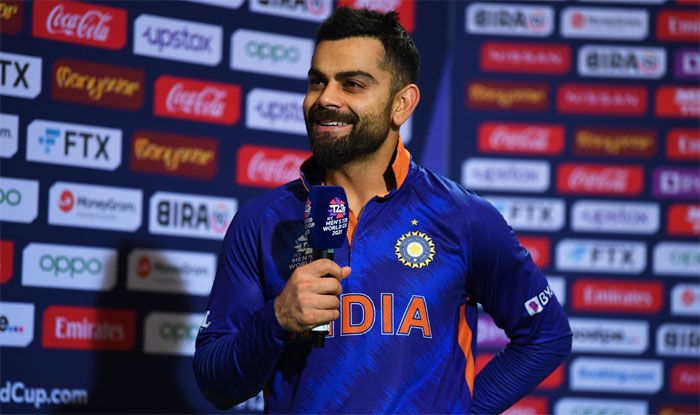 Dubai: Virat Kohli’s India were clinical as they ended their campaign on a high hammering Namibia by nine wickets and 28 balls to spare on Monday during their Super 12 game in Dubai. After the win, a ‘relieved’ Kohli thanked everyone for being around the team and admitted that it was an honour leading the side.Also Read – LIVE IND vs NAM T20 World Cup 2021 Live Score Today, T20 Live Cricket Match Latest Updates: Rohit Sharma-KL Rahul Fifties Power India to Consolatory 9-Wicket Win vs Namibia

“Relief firstly (on leaving T20I captaincy). It’s been a honor but things need to be kept at the right perspective. I felt this was the right time to manage my workload. It’s been six or seven years of heavy workload and there is a lot of pressure. The guys have been fantastic, I know we haven’t got the results here but we have played some really good cricket. A big thank you to all those guys (Ravi Shastri and his support staff). They have done a great job over the years, creating such a wonderful environment for the players.” Kohli at the post-match presentation. Also Read – Here’s Why Indian Team Wore Black Armbands in T20 World Cup Match Against Namibia

Despite knowing they are out of the semi-final race, Kohli’s India was absolutely professional against an inexperienced Namibia. Right from the toss – which Kohli won – things went in favour of India. The spin duo of India – Ravindra Jadeja and Ravi Ashwin – were the stars of the night as they picked up three wickets apiece to restrict Namibia to 132 for eight in their stipulated 20 overs. Also Read – T20 World Cup: This Indian Team is One of the Great Teams in History, Ravi Shastri Hails Virat Kohli & Co as he Signs Off Against Namibia

Chasing 133 to win their last Super 12 game, Rohit Sharma and KL Rahul got off to a blazing start – as they did against Afghanistan and Scotland. Rohit and Rahul took on the Namibian bowlers knowing well that the pitch was a good one to play shots on.

During the chase, Rohit joined Virat Kohli and Martin Guptill as he brought up 3000 T20 runs during the match. After getting India off to a good start, Rohit perished for 56 off 37 balls while trying to hit a six. Rahul brought up his third fifty of the tournament as he remained unbeaten on 54* off 36 balls, while Suryakumar Yadav remained not out on 25* off 19 balls.