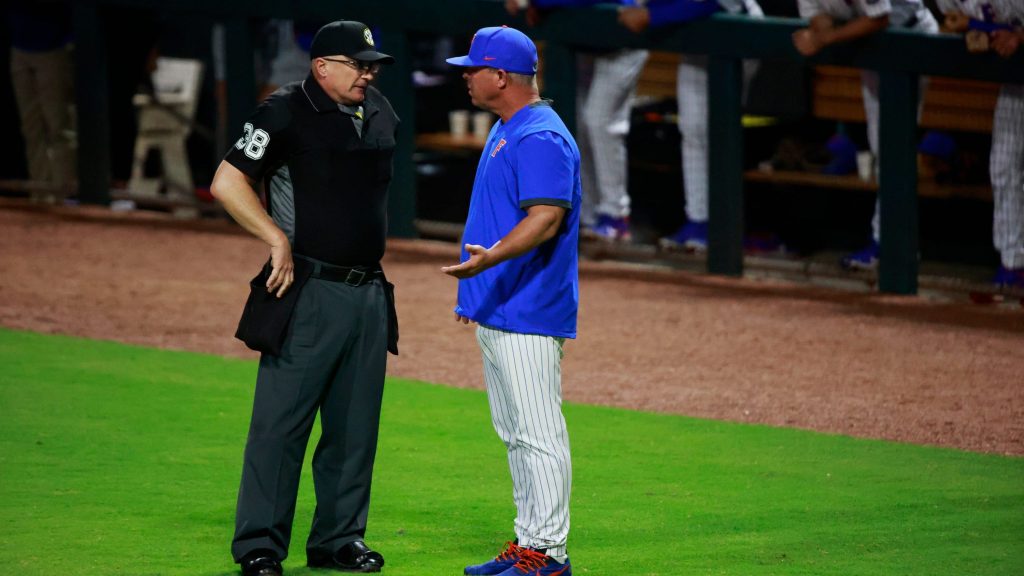 Florida baseball continued to find ways to seize defeat from the jaws of victory in Southeastern Conference play on Saturday night, surrendering an early lead and ultimately losing in Nashville to the Vanderbilt Commodores, 8-6. The Gators brought the bats in the second game of the weekend series, crushing four dingers — including three by catcher BT Riopelle — but simply did not have the pitching needed to keep the team buoyant during a middle-inning push by the opposition.

The first inning was quiet for both teams, but Riopelle led off the second with his first dinger of the day against starter Carter Holton for a 1-0 lead. Gators starter Brandon Sproat kept the ‘Dores off the board for the opening three frames, going 1-2-3 in the first and third innings while escaping a leadoff hit and a follow-up walk in the second inning.

Florida struck again in the top of the third, landing three runs on a majestic opposite-field two-run Riopelle homer and a Josh Rivera round-tripper a batter later; Kendrick Calilao gave the ball a good run himself between the two. Vandy would answer in the bottom half with a leadoff solo home run by Dominic Keegan to get on the board and make it a 4-1 game, signaling the turning point for the Commodores.

The home team added another in the fifth inning and then exploded in the sixth, knocking Sproat out of the game after 5 2/3 innings having given up eight hits and six earned runs — thanks in large part to inherited runners scoring off Tyler Nesbitt after his departure. Vanderbilt took a 6-4 lead into the seventh and would not trail again.

The Gators were able to tie things up in the top of the following frame thanks to Riopelle’s third dong — another two-run shot — that gave the Orange and Blue some hope. However, Nesbitt got in trouble, and Kevin O’Sullivan turned to his most trusted reliever Blake Purnell to put out the fire. My friends, I regret to tell you that this story does not end like you hoped, as the sidearmer allowed a runner across the plate and gave the ‘Dores a lead they would not relinquish.

Vanderbilt added an insurance run in the bottom of the eighth off Ryan Slater before closing things out in the ninth for the win. The two teams meet tomorrow at 1 p.m. EDT on ESPN2 as the Gators try to prevent another SEC road sweep.