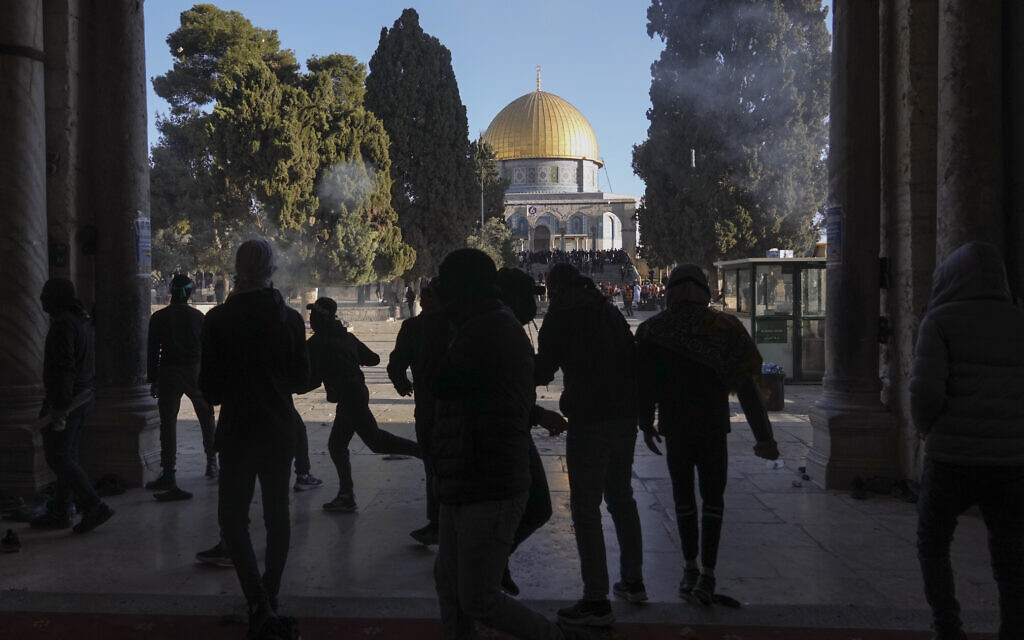 The United States expressed its “deep concern” over the Friday morning violence at the al-Aqsa Mosque compound, where hundreds of Palestinian worshipers clashed with Israeli police in scenes akin to those that prefaced last May’s Gaza war.

“We call on all sides to exercise restraint, avoid provocative actions and rhetoric, and preserve the historic status quo on the Haram al-Sharif/Temple Mount,” the State Department said in a statement. Under the current 54-year-old status quo, Muslims can pray at the holy site while Jews are allowed to visit — under heavy restrictions, in a predetermined route and only for several hours on weekdays — but not pray there.

“We urge Palestinian and Israeli officials to work cooperatively to lower tensions and ensure the safety of everyone,” the statement continued. “The State Department is closely following developments and will continue to be in close contact with senior Israeli and Palestinian officials to seek to deescalate tensions.”

The State Department’s decision to weigh in indicated the heightened level of seriousness with which the Biden administration is approaching Friday’s events, as earlier in the day, it was only the US Embassy in Jerusalem that issued a statement.

“We are closely monitoring events in Jerusalem during this sacred holiday period for Jews, Muslims, and Christians. We urge everyone to refrain from actions that further escalate tensions. We encourage all parties to work together to ensure calm and the quiet enjoyment of all religious holidays,” the embassy said hours earlier.

Since the beginning of the year, the Biden administration had identified the confluence of religious holidays — Passover, Ramadan and Easter — in April as a recipe for possible violence in Jerusalem. For the past several months, US officials have been urging their Israeli and Palestinian counterparts to take steps to lower tensions during the sensitive period in order to avoid a repeat of last May, when clashes in Jerusalem snowballed into an all-out Gaza war, US and Israeli officials have told The Times of Israel.

The task has proven difficult against the backdrop of a terror wave of the past several weeks, which took the lives of 14 people in Israel. Sixteen Palestinians have also been shot dead by Israeli troops in the West Bank since the start of the month — the vast majority in violent clashes with IDF soldiers.

Further kindling of the fire came in the form of a small group of Jewish extremists who announced — as they have in years passed — that they would be performing a Passover animal sacrifice on the Temple Mount.

Despite Israeli authorities’ insistence that they would not allow such a ceremony to take place and their arrests of nearly a dozen of those Jewish extremists, rumors swirled on Palestinian social media, and thousands of Palestinians arrived at the Temple Mount compound before dawn on Friday in order to “defend Al-Aqsa.” To many Palestinians, the holy site is seen as one of the last places where they still have a degree of sovereignty, and increasing reports of Jewish prayer on the site over the year appear to have only made many Muslims more fearful of violations to the status quo.

On Friday, hundreds of Palestinians barricaded inside the Al-Aqsa Mosque, stockpiling rocks and other objects to hurl at intruders. Dozens of young people began marching through the compound, some waving Palestinian flags, while others carried green banners associated with the Hamas terror group, police said. The marchers threw stones and set off fireworks.

Fearing that the stones would eventually be hurled at worshipers at the Western Wall below and that the stockpiled weapons would be used when an even larger crowd arrived for afternoon prayers later in the day, police decided to enter the compound in full force.

Officers arrested some 400 rioters and the Palestinian Red Crescent said that 158 were injured — a majority of whom likely due to tear gas inhalation. Footage showed chaos at the site, with rocks raining in all directions and fireworks being shot toward heavily armed police. Palestinians circulated clips of officers striking protesters, including fleeing women and journalists, for no apparent reason.

Determined to clear the mosque of the stockpiled stones, police decided to breach the building in what resulted in dozens of arrests and scenes identical to those that unfolded nearly a year ago.

After six hours though, they managed to rid the compound of rioters, throwing hundreds on buses to a nearby police station. Calm was restored and afternoon prayers managed to go off without incident, with some 50,000 Muslim worshipers taking part.

Prime Minister Naftali Bennett held a situational assessment with police chiefs on Friday morning, during which he said security forces were “working to calm tensions on the Temple Mount as well as throughout Israel, and we are preparing for any scenario,” according to a statement from his office.

But police conduct against the protesters enraged Israel’s Mideast neighbors, with Jordan, Egypt, Saudi Arabia and Turkey all issuing statements of fierce condemnation.

The UN and EU were more measured in their responses, instead focusing on calling for calm and urging the parties to act with restraint.

Hamas chief Ismail Haniyeh spoke on the phone with Egyptian officials and United Nations Middle East envoy Tor Wennesland on Friday following the clashes, according to the terror group.

In Haniyeh’s call with Wennesland, the Hamas leader demanded the Israelis fulfill several conditions: allow worshippers to pray at Al-Aqsa and end police operations there, release those detained after Friday’s clashes and definitively prevent extremist Jews from sacrificing at the hilltop, as a tiny minority had hoped to do.

Haniyeh also demanded that Israel cease “its killing and assassination operations in Jenin and across the West Bank,” according to the Hamas statement.

At 4 p.m. on Friday, the IDF’s closure of the West Bank and Gaza Strip for Palestinians went into effect. The policy is standard for holidays, but the Defense Ministry said it would reevaluate the situation on Saturday evening, possibly lifting the lockdown then instead of maintaining it for the entire week-long holiday.