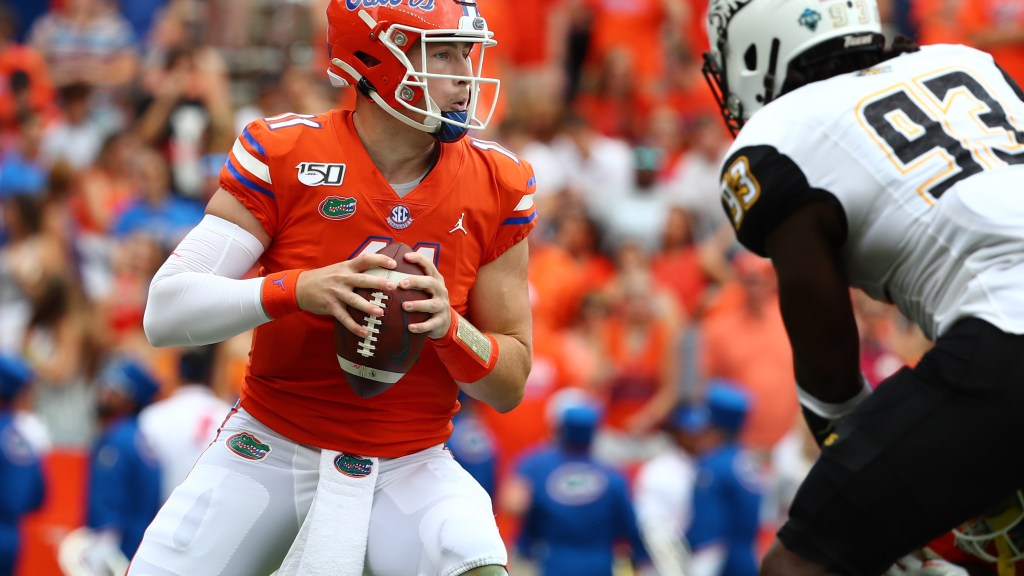 Florida was absolutely boat raced on Saturday by one of the weaker teams in the SEC as South Carolina beat the Gators 40-17 at Williams-Brice Stadium to earn its first win in the series since Dan Mullen became the head coach.

That game set the team back to 4-5, and while this team had its sites set on the College Football Playoff after coming up just two points short of then-No. 1 Alabama in September, a bowl game is now far from a guarantee, as UF has to win two of its final three games against Samford, Missouri and Florida State.

This week’s contest presents the best chance to earn one of those wins as the Bulldogs, members of the Football Championship Subdivision Southern Conference, sit at just 4-5 on the season. But they have had some impressive moments against ranked FCS teams, falling 46-45 to No. 18 VMI and dropping a 55-48 game to No. 15 East Tennessee State in overtime.

Much like the Group of Five, not all FCS teams are created equal, and the Bulldogs are not among the toughest teams in the lowest level of Division I football. But no games are a given, as Florida fans should know very well. With that in mind, here’s a rundown of how this team has fared in FCS contests over the last decade.

Florida was supposed to take on FCS Eastern Washington last season, but as a result of the COVID-19 pandemic, that game was canceled in favor of a conference-only slate. That makes 2019’s win over Towson UF’s last try against an FCS team, and it went quite well.

The Gators shut out a Tigers team led by Tom Flacco, younger brother of Super Bowl-champion NFL quarterback Joe Flacco. In what was just the second start of his career, quarterback Kyle Trask completed 18 of his 20 passes for two touchdowns.

In a rare scheduling quirk, the Gators actually played two FCS games in 2019, facing off against the Skyhawks in Week 2 before the game against Towson. That was Florida’s home opener after it defeated Miami in Orlando in “Week 0,” and it was yet another shutout for Todd Grantham’s defense (one of three on the season).

This was before the season-ending injury to Feleipe Franks, and he had a performance similar in efficiency to Trask’s against Towson later in the year, completing 25 of 27 passes for 270 yards and two touchdowns.

Florida played two FCS games in 2018, as well, but that wasn’t the plan when the games were initially scheduled. Idaho traveled to Florida for the season-opener in 2014, but that game had to be canceled due to bad weather. As part of the negotiation with the Vandals, another contest was scheduled for 2018, but in the meantime, the school decided to drop down to the FCS level to join the Big Sky Conference.

It’s been a rough go for Idaho at the lower level, and it didn’t put up much of a fight in a blowout Florida win. Franks threw for three touchdowns, while Emory Jones saw the first extended action of his career, completing 12 of 16 passes for 125 yards and two touchdowns.

Florida started the Dan Mullen era off with a bang in 2018, defeating the Buccaneers by 47 points. Feleipe Franks threw five first-half touchdowns in the win, while then-true freshman Dameon Pierce led the team in rushing with 75 yards on just nine carries.

It wasn’t all great, as the Gators lost cornerback Marco Wilson for the season in this game, and it was followed up by a home loss to Kentucky that ended Florida’s 31-game winning streak in the rivalry.

We have to go back a few years to find Florida’s next FCS contest. Its game in 2017 against Northern Colorado was canceled due to Hurricane Irma, and its 2016 game against Presbyterian had to be canceled to reschedule a matchup against LSU, which itself was postponed as a result of Hurricane Matthew. Then, in 2015, the team simply didn’t schedule an FCS opponent.

When the Gators took on the Colonels in 2014, they did so with a lame-duck coach. Will Muschamp had already been fired after a loss in overtime to South Carolina the prior week, and he was coaching in his final game at the Swamp against EKU.

Jeff Driskel had one of his best games as a Gator, throwing for three touchdowns and 164 yards on 9 of 11 passing. Treon Harris, meanwhile, completed just four passes for 162 yards with two scores of his own, and the team had more than 100 yards on the ground, led by Adam Lane with 60 on five carries.

Nope. Nothing to see here. Moving on.

In all seriousness, Florida’s 2013 season was probably not quite as bad as the final 4-8 record would have you believe. The team was ravaged by injuries, and after a 4-1 start, it dropped its final seven games. The Gators entered this game sitting at 4-6, and with the season finale coming against eventual national champion Florida State, there wasn’t much hope at bowl eligibility.

Still, there’s no way around what happened in the Swamp on Nov. 23. The Eagles defeated UF without completing a single pass, instead opting to rush for 429 yards. It was Florida’s first loss to a team in the FCS since falling to Villanova during a winless 1946 season, and given the program’s standards in the 21st century was almost certainly the worst loss in its history. The 2013 season was Georgia Southern’s last as an FCS team before moving up to the Sun Belt Conference, but it counts all the same.

Florida’s 2012 season didn’t exactly feel like watching a team that was a USC upset of Notre Dame away from playing in the BCS Championship Game, and it certainly had some close calls like when it needed a blocked punt returned for a touchdown late to get past Louisiana-Lafayette.

It took care of business against a Jacksonville State team that finished just 6-5 that season, holding the Gamecocks to 242 yards and zero points. Quarterback Jeff Driskel was hurt for this game, and it wasn’t a great day for Jacoby Brissett and the offense. UF would go on to earn a big win over Florida State in Tallahassee before being embarrassed in the Sugar Bowl by Louisville.

At one point, it looked like Florida was going to lose this game, as well. With bowl eligibility on the line against the Paladins, the Gators got off to a horrendous start, trailing 15-0 early and allowing 22 points in the first quarter alone.

UF eventually crawled back to take a 27-22 lead at halftime, and it would extend that lead in the second half. Still, Furman stuck around and trailed by just five points entering the fourth quarter before 17 unanswered Florida points put the game out of reach. Quarterback John Brantley eventually had one of the best games of his college career, throwing for 329 yards and four touchdowns, and the Gators would go on to defeat Ohio State in the Gator Bowl to conclude a 7-6 Year 1 for Muschamp.