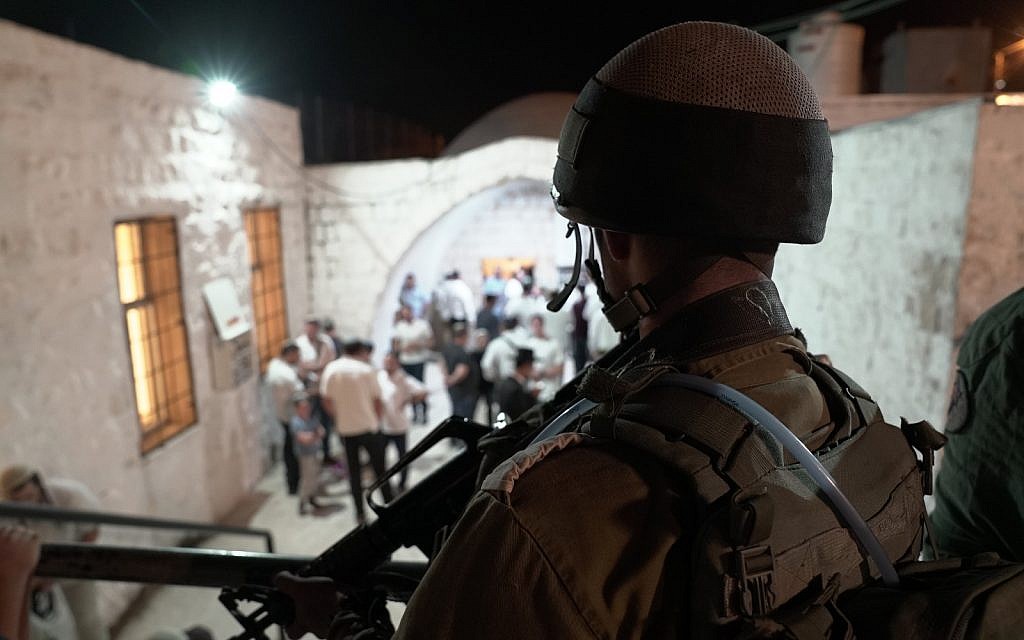 Two Hassidic Jews were shot and wounded while trying to reach Joseph’s Tomb near the West Bank city of Nablus, the IDF said Monday.

The two men, part of the Bratslav Hassidic community were attempting to reach the shrine, without having coordinated with the Israel Defense Forces that usually oversees visits by Jewish worshippers.

The army said that they ignored an unmanned roadblock at the entrance to Nablus.

The incident comes a day after Palestinians vandalized and set fire to parts of the shrine, drawing widespread condemnation in Israel.

According to Channel 12 news, the two said they had wanted to help restore the shrine.

The two men, and the rest of the group, managed to reach an IDF checkpoint near the shrine, where they received first aid assistance and were evacuated to the Beilinson hospital in Petah Tikvah, the army said.

The two men were lightly to moderately injured and the IDF was investigating the circumstances surrounding their injuries.

Overnight Sunday, around 100 Palestinians broke into the site overnight, rioted and set it ablaze, before they were dispersed by Palestinian security forces and smashed objects inside, Israel Defense Forces spokesman Brig. Gen. Ran Kochav said.

Images on social media showed parts of the tomb inside the shrine smashed and charred.

The rioting came amid clashes between Palestinian gunmen and IDF soldiers in the nearby Balata refugee camp in the Jenin area.

Footage showed dozens of Palestinians entering the site and smashing objects inside. The tomb is venerated by Jews, Christians and Muslims, and has often been a flashpoint for violence.

Some Jews believe the biblical Joseph is buried in the tomb, while Muslims say a sheikh is buried there. The army escorts Jewish worshippers to the site several times a year, in coordination with Palestinian security forces.

Prime Minister Naftali Bennett joined the condemnation on Sunday of the overnight arson and vandalism of Joseph’s Tomb, saying he was appalled by the images of the damage to the shrine.

“During the night Palestinians destroyed Joseph’s Tomb. Dozens of Palestinian rioters in a campaign of destruction simply violated a holy place for us, the Jews,” Bennett said at the start of the cabinet meeting.

“They broke the tombstone on the grave, set fire to rooms in the compound — I saw the pictures and was shocked,” he said.

“We will not abide such an assault on a place that is holy to us — on the eve of Passover — and we will get to the rioters,” he said. “And of course we will make sure to rebuild what they destroyed, as we always do.”

Earlier, Defense Minister Benny Gantz said the vandalism was a “grave event,” and said he had sent a “strong message” to the Palestinian Authority about the attack on the shrine.

Gantz said that Israel will work quickly to “ensure that the site is refurbished and quickly returned to its original condition.”

Joseph’s Tomb is located inside Area A of the West Bank, which is officially under complete Palestinian Authority control, though the Israeli military conducts activities there. The IDF bars Israeli citizens from entering Area A without prior authorization.

Jewish pilgrims are usually only allowed to visit the tomb once a month under heavy armed guard. During these visits, Palestinians routinely throw rocks at the troops, and sometimes attack them with Molotov cocktails and gunfire.

The shrine has also been torched in the past.

The overnight attack came during the Muslim holy month of Ramadan — often a period of high tension in Israel and the West Bank.

Israel has seen four deadly terror attacks in recent weeks and has ramped up security measures in response, as well as carrying out a number of raids in the West Bank.