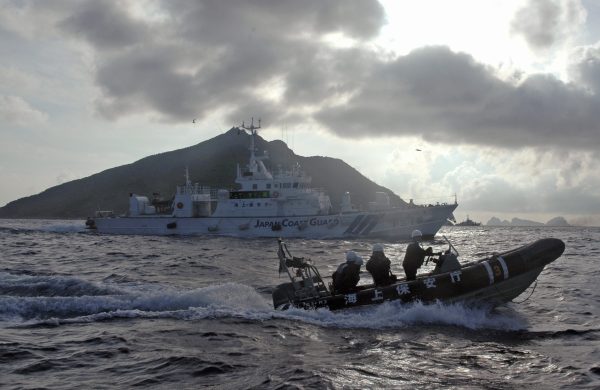 It has become a regular occurrence for vessels of the China Coast Guard to intrude into the territorial sea around the Senkaku Islands (which China calls the Diaoyu), navigate in the contiguous zone, and approach and pursue Japanese fishing vessels. By the end of October 2021, CCG ships had navigated in the contiguous zone on 291 days in total, a similar pace to 2020 when 333 days were recorded that year, the most in any year. (The total was 291 days by end of October last year, as well.)

Given the ongoing tensions around the Senkaku, and the adoption of the China Coast Guard Law (CCG Law) in the spring of 2021, which attracted considerable attention in Japan, there have been calls for Japan to revise the Japan Coast Guard (JCG) system. The Japan Coast Guard Act is the legislation on the basis of which Japan takes measures against CCG ships in surrounding waters, and amendments are often proposed. One proposal seeks to add “maintenance of  territorial sea integrity” and “security of territorial sea” to the Act’s mission, while another seeks to moderate the prerequisites allowing harm through use of weapons by Coast Guard officers. All of these proposals seek to give the JCG more muscle.

Is it necessary to revise the JCG Act? Revisions of the “National Security Strategy” are also planned, and a formal study of the possibility of revising the JCG Act may take place in the future.

The JCG take measures against CCG ships that have entered the territorial sea around the Senkaku Islands with law enforcement operations based on international and domestic laws. In other words, it regulates routes and requests ships to withdraw if they enter the territorial sea.

With revisions to the JCG Act in August 2012, “maintenance of order in the navigation of vessels at sea” was added to the Act’s mission. This is based on the measures taken against activity of foreign vessels that can be evaluated negatively in the context of international law.

With this revision, the following two activities are allowed.

The first activity is in response to foreign ships that non-innocently pass through Japanese territorial sea. The activities of CCG ships that claim to be patrolling around the Senkaku Islands in Japanese territorial seas based on China’s domestic laws are considered “non-innocent” under the United Nations Convention on the Law of the Sea (UNCLOS), and the JCG is engaged in route regulation and withdrawal requests for the “maintenance of order in the navigation of vessels at sea.”

The other action is in response to marine scientific research by foreign ships conducted in the Japanese Exclusive Economic Zone (EEZ) without the consent of the Japanese government. This is a violation of the obligations of parties to UNCLOS. Japan protests research that violates UNCLOS through diplomatic channels, and requests that such research conducted in the current waters be stopped for the “maintenance of order in the navigation of vessels at sea.”

The legal basis is already in place for the JGC to take measures against incursions into Japan’s territorial sea by CCG ships and broad violations of international law by foreign ships. The JCG is in fact already taking measures based on these legal grounds. Adding “maintenance of territorial sea integrity” and “security of territorial sea” to the mission of the JCG will not change how it responds. It will not lead to Japan taking stronger measures.

For example, if members of the CCG were to attempt to land on the Senkaku, would the JCG respond with law enforcement operations (a criminal investigation or in flagrante delicto arrest) conducted in response to a violation of the Japanese Immigration Control Act, or would the Self-Defense Forces (SDF) respond to secure Japan’s sovereignty, deeming it a situation where a foreign force is attempting to intrude upon Japan’s territorial integrity?

With the situation constantly in flux, it is unlikely to be easy to determine whether a response should entail maritime law enforcement operations or national security. Yet one of these actions must be taken, as Japan cannot sit calmly back and watch the situation unfold.

Japan should carefully consider the likely scenarios involving the territorial sea around the Senkaku, and move forward with legal and policy preparations that enable it to respond appropriately and effectively to each event.

Some issues will require political decisions, made with an eye to a developing situation. In particular, the government must be prepared to be decisive in critical situations. It needs to determine what might actually constitute a “critical situation.”

The Japanese government has always said that it will act calmly and resolutely in response to issues involving the territorial sea around the Senkaku Islands. This claim is now being put to the test.