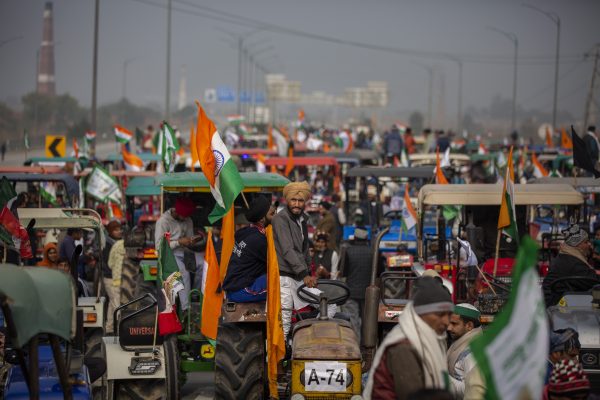 Both the laws’ passage and repeal demonstrate the Modi government’s lack of parliamentary procedure and public consultation. That means similar issues are likely to recur in the future.

In this Jan. 7, 2021 file photo, farmers take out a tractor rally in a protest against new farm laws at Ghaziabad, outskirts of New Delhi, India.

After a year of defending the three controversial agricultural laws passed in 2020, Indian Prime Minister Narendra Modi took a U-turn in November 2021, giving in to the longstanding demands of the farmers protesting the legislation. The unexpected announcement coincided with the Sikh festival of Guru Parb, which marks the birth anniversary of the first Sikh Guru Nanak, indicating that the government was appeasing the Sikh farmers who made up a big part of the movement.

Although the U-turn was a tactical move rather than a forced retreat, it has undermined Modi’s reputation as a strongman and provided ammunition to his critics. The government’s decision to revoke the laws is a rare occurrence given that Modi has not been known to budge in response to public pressure. There has only been one other instance in which the Bharatiya Janata Party (BJP) government has backed down from a decision. During Modi’s first term, the government promulgated an ordinance to reform the Right to Fair Compensation and Transparency in Land Acquisition, Rehabilitation and Resettlement Act, 2013, passed by the previous Congress government. However, in 2015 Modi announced that the reform bill would be abandoned.

The rare retreat on the farm laws was driven by the state assembly elections that are due in February and March. Many of the states heading to elections – including Punjab, Uttar Pradesh, Uttarakhand, and Himachal Pradesh – are heavily invested in the agricultural sector. The government had initially thought that the political fallout from the farm laws was limited to Punjab and Haryana but eventually realized that it had proliferated to the western part of Uttar Pradesh. While the loss of a small number of seats from Uttar Pradesh may not have been a major concern, the government is afraid of losing a significant number of seats or even being compelled to form a minority-led government in the state.

The government is hoping that the repeal of farm laws along with recent reduced taxes on diesel and petrol would do some damage control. In recent years, the government has invested in schemes such as PMKISAN and Ujjwala Yojana to consolidate its power in rural areas. A poor performance in Uttar Pradesh would have implications for the 2024 general elections given that the state is the most politically dominant one and holds the biggest share of seats in the parliament. It’s well regarded that the winning party in Uttar Pradesh forms the central government. A substantial victory in Uttar Pradesh would strengthen Modi’s position and his ability to retain power beyond 2024.

There are speculations as well that the decision to repeal the agricultural laws was also motivated by fears that Khalistani extremists and leftists were appropriating the movement to pursue their political goals.

The farmers’ demonstrations have indeed been one of the biggest domestic challenges for the Modi government, with tens of thousands of people protesting for more than a year. The crisis was an outcome not only of the content of the farm laws, but also of the manner in which the laws were implemented. They were introduced through an ordinance during the peak of COVID-19, with little public deliberation and little to address perceptions that they served corporate interests. Instead, BJP members branded farmers as Khalistani terrorists, anti-nationals, and farming “elites.”

The vilification of farmers, stalled discussions, and the heavy-handed response from security forces resulted in a trust deficit between the two sides. Protesting farmers camped out in the open on national highways to have their voices heard. In January 2021, thousands of farmers clashed with police on Republic Day, and some trespassed into the Red Fort to raise the Sikh religious flag. The temporary takeover of the Red Fort was a powerful symbolic move intended to undermine the legitimacy of the Modi government.

Although the farmers’ protests seemingly lost some momentum during the second wave of the pandemic, farmers quickly heeded calls by farm unions to remobilize once COVID-19 cases subsidized. The Bharat Bandh movement in September 2021 was supported by more than 500 farmer organizations, 15 trade unions, many political parties, and six state governments. The Lakhimpur Kheri incident in Uttar Pradesh in which three SUVs, including one owned by the Union Minister of State for Home Affairs Ajay Misra, ran over some protesting farmers in UP and killed eight people further agitated farmers and possibly increased sympathy for their cause.

The farm laws should be seen in the wider context of the government’s reputation for passing and repealing laws with little parliamentary oversight and public consultation. There was no parliamentary debate when the three controversial farm bills were repealed during the 2021 winter session. The Farm Laws Repeal Bill was passed in nine minutes in the Rajya Sabha and just three minutes in the Lok Sabha, meaning Parliament did little to fulfil its role of holding discussions on the proposed bill.

Although farmers ended their protests in December 2021 after the government agreed to their wide-ranging demands, including the withdrawal of criminal cases against them and guaranteed prices for their agricultural produce, they are in a position to remobilize on the streets without hesitation. The absence of public deliberations on issues that matter to them is likely to act as a potential trigger for new rounds of demonstrations. Moreover, Modi may introduce similar economic reforms in a different form once the state assembly elections are over. His administration, however, may face more pushback from farmers and their supporters.