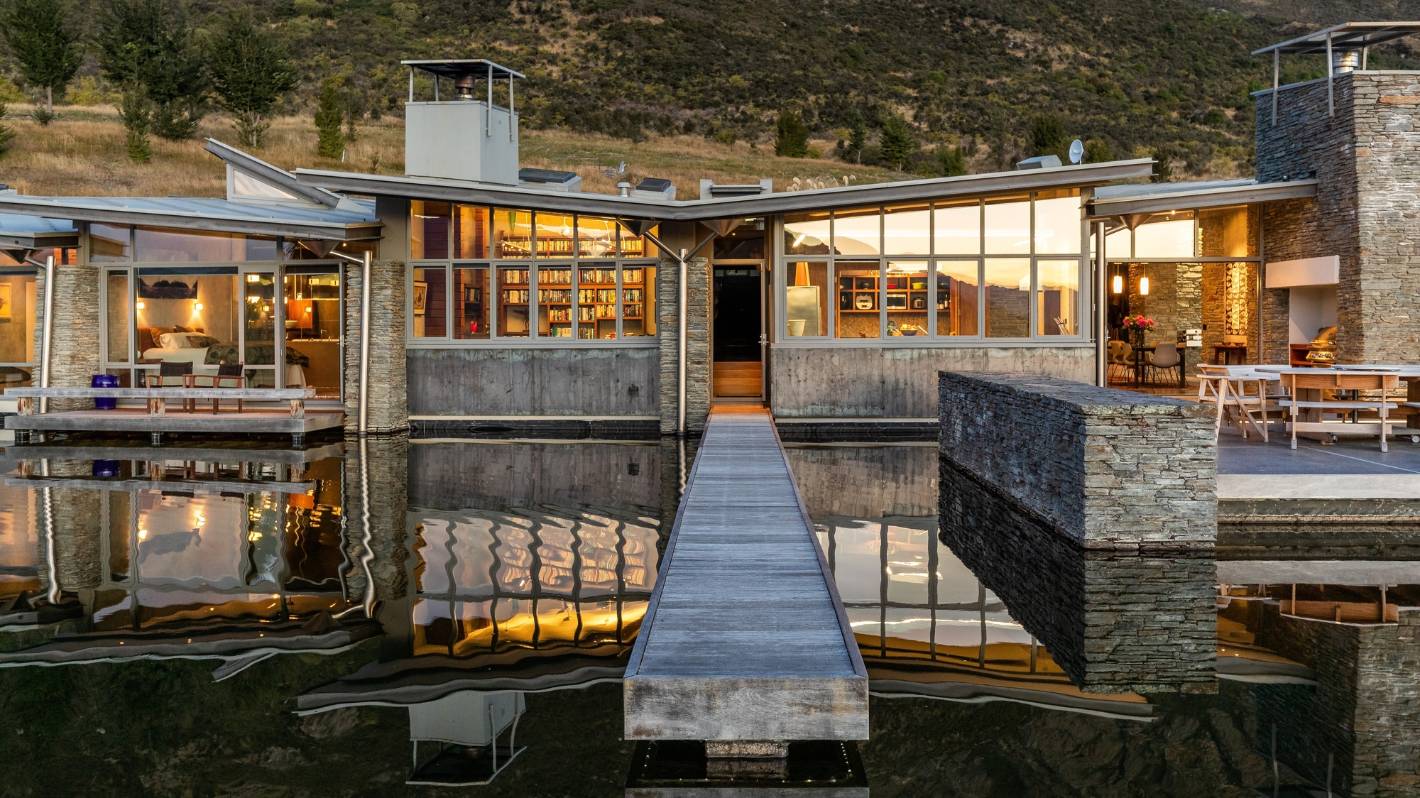 Designed by architect Michael Wyatt, Pokapu on the Remarkables Ski Field Access Road in Queenstown is a luxury property currently listed with NZ Sothebyâs International Realty. A mountain tarn laps the front of the 609 square-metre house, which is for sale by negotiation.

There’s one sector of the property market that appears largely untouched by the downturn in prices, and that’s the luxury sector.

Although, that may change as more properties are listed – and there has been a big jump in listings this year. Trade Me Property sales director Gavin Lloyd says in February there was a 56 per cent increase in property listings over $5 million compared to the same period in 2021.

In February 2021 there was 11 per cent increase in the total number of properties in all price brackets listed nationwide, compared to the previous year.

But real estate agents specialising in very expensive properties say the credit crunch is not having the same effect on their clients as it is on buyers in the middle and lower ends of the market.

READ MORE:
* Just how hard is it to sell a house in the current market?
* Family building biggest passive house in the country could even go off-grid
* How New Zealand’s most expensive multi-million dollar mansions get sold

Graham Wall of Wall Real Estate in Auckland says “we are pretty much finding nothing’s changed”. “Usually, when someone coughs, everyone gets the ‘flu.”

He puts the absence of panic down to several factors. “Some pretty smart people seem to think the safest place to have your money in slightly turbulent times is in prime residential real estate.

“There are so few really beautiful houses in New Zealand, and there are more buyers than sellers, so the luxury sector is not affected like the mass market. That doesn’t mean as soon as you have a $25 million listing you are going to sell it the same afternoon. There is always a bit of a thought process for buyers.”

And the second reason Wall quotes is that buyers are usually not at the mercy of the banks. “If someone is spending over $15 million, they are usually reallocating money. They are not going down to the bank saying ‘I need to borrow $10 million’. They are generally selling a business or farm, or another expensive property.”

Gary Wallace of Bayleys Remuera says there has been a downturn across the aboard, “but it obviously affects society differently, depending on where you sit”.

Wallace says sales are still very property dependent: “If you have a good property that appeals and ticks boxes for the buyers there is still plenty of interest, be it at $2 million or $20 million.

“Although there’s a bit of doom and gloom about, there are still plenty of people getting on with their lives. Life goes on and people are fairly pragmatic. But it is true, depending on what spectrum you are operating, FOMO (fear of missing out) has changed to fear of paying too much.”

Wallace says there is currently “good interest” following a recent deadline sale for a house Bayleys is marketing at 120 Victoria Avenue, Remuera, which has an RV of $17.25 million and a Homes.co.nz estimate of $19.2 million.

Mark Harris, managing director, NZ Sotheby’s International Realty says there has been a bit of a drop-off in enquiries over the past three months across the board, but a large part of that was the usual lull from December through February.

“People are getting back into the groove. While there has been a bit of a reset, there is not too much concern. There is still plenty of interest in the high end. That end of the market is pretty robust – the Aussies are coming in again and New Zealanders are on the move.”

Harris also says the luxury property market is less affected by an increase in interest rates. “We are staying on our toes and watching it carefully, but it hasn’t had much effect yet. Properties in high-quality locations with views or a lakefront position are still attracting enquiries and interest.”

Harris says much of that interest in Southern Lakes properties falls into the $14 million to $15 million realm.

Terry Spice of Luxury Real Estate in Queenstown says the firm has barely missed a beat this year. “We are certainly getting really good enquiries at the moment. But there is a lack of premium stock, to the point where some people don’t want to go to market – they are keeping it silent (but looking for a sale).

Spice says marketing for these vendors is a “stealth process”. “It’s about getting a very qualified group of people to show through the properties.”

The agent says the high-end market for local families in Queenstown is usually “capped out” between $5m and $6m, with buyers from other parts of the country looking in the $7m+ price bracket.

“The desirability to be down here is still very good. We have yet to test the Australian market, but we are hoping for a good winter for tourism, which always creates additional interest.”