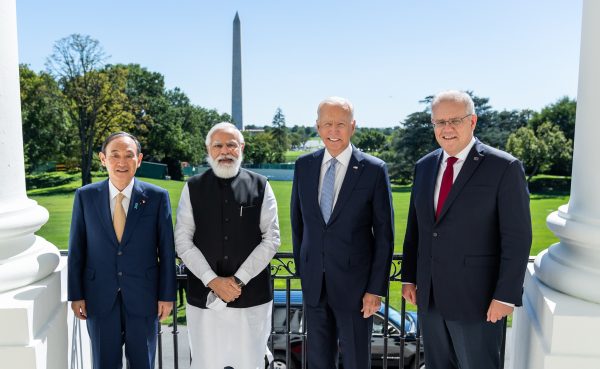 The current effort – including AUKUS and the Quad – is missing three critical ingredients compared to early efforts in Cold War Europe.

Some pundits argue that we are “present at the creation” of a new security architecture for the Indo-Pacific, invoking the title of the memoirs of Dean Acheson, one of the architects of the U.S. strategy of containment in the 1940s. Perhaps we are, yet neither AUKUS nor the Quad summit gets us very far on that path. While they both signal growing resistance to Beijing’s increasingly assertive stance, significant gaps remain in the efforts to channel China’s ambitions.

In this context, a comparison with the history of the early Cold War in Europe is instructive. What is missing so far in the Indo-Pacific are three critical ingredients: firm commitments; the right multilateral framework; and solid domestic support for a new regional order that could constructively accommodate China’s rise in key countries.

First, commitments: In the Cold War in Europe, U.S. strategy built on a treaty that specified commitments and obligations for all its member states. On that treaty foundation, NATO eventually erected an integrated military structure with a single line of command. Commitments were underwritten by the forward deployment of troops, thus bolstering trust. By contrast, AUKUS and the Quad so far are little more than declarations of intent. One key element of AUKUS, the purchase of eight American-British nuclear-powered submarines by Australia, is yet to be negotiated in its details, with both the cost and the time frame still highly uncertain. Neither Washington’s withdrawal from Afghanistan nor the way France was duped by AUKUS set good examples of steadfast, reliable commitment to U.S. allies.

Second, the Indo-Pacific is missing the right format for multilateral cooperation. In Europe during the early Cold War, NATO quickly became the framework of choice for all who wanted to resist the expansive ambitions of the Soviet Union. AUKUS, by comparison, is a rather peculiar construct that excludes many important partners. It includes Britain, of course, but the presence of the United Kingdom reflects wishful thinking rather than serious effort. London’s participation appears to suggest that Britain might contribute significant resources to Indo-Pacific security and stability – a suggestion underlined by the recent visit of the Royal Navy’s aircraft carrier Queen Elizabeth to Indo-Pacific waters and its participation in multilateral exercises. Yet the reality is that the United Kingdom can ill afford to export security into other parts of the world: its defense budget is tight, its military resources are over-extended, and European security looks increasingly threadbare against the determined military build-up undertaken by Russia. Brexit does nothing to detach Britain from European security, much as its present government seems bent on ignoring that umbilical cord. The U.K. is in no position to export security to the Indo-Pacific in anything but symbolic terms. Its participation in AUKUS therefore reflects the escapism of Prime Minister Boris Johnson rather than the security policy realities in Europe and in the Indo-Pacific.

On the other hand, several obvious countries are missing from both AUKUS and the Quad. Even assuming the two frameworks could somehow be integrated or built on, those missing include the two other members of the Five Eyes, Canada and New Zealand; Southeast Asian countries such as Vietnam; and France, a significant Indo-Pacific power through its overseas possessions and its military presence in the Indo-Pacific. All those countries already are U.S. allies or partners, most of them through formal treaties. Astute American diplomacy (which, sadly, has been in short supply recently) should manage to get them to sign on. On the other hand, the Quad non-aligned India, which has been moving closer to the United States seems unlikely to enter into formal alliances any time soon.

Both the Quad and AUKUS envisage forms of cooperation beyond military security policies, for example on cybersecurity and artificial intelligence (AI). Neither the Quad nor AUKUS seems the right format, however: tellingly, their agendas largely overlap with each other, as well as with the agenda envisaged for the Euro-American Trade and Technology Council. There is thus a risk that some of the most precious resources of governments, high-level time and attention, will be dissipated and thus squandered in overlapping and possibly even competing multilateral frameworks. Thus, neither AUKUS nor the Quad, nor even the two together, is the right framework for building a sturdy Indo-Pacific security architecture that could constrain China. The institutional infrastructure of Indo-Pacific security needs both deepening and widening.

The third gap – and another major difference to Cold War Europe – concerns the domestic politics of foreign and security policy. In the Atlantic community, the commitment to NATO rested on a firm and permissive bipartisan consensus in the United States, as well as on strong domestic political foundations in most, if not all member countries. Today, foreign and security policies in many countries are held hostage to domestic preoccupations, political polarization, and nationalist reflexes. Most importantly, the alleged bipartisan consensus on China in the U.S. is deceptive. The Republican Party seems perfectly capable of undercutting the Biden administration on any specific move on China as long as it sees this as a way to damage Biden and the Democrats’ prospects. Political polarization in Washington risks undermining the kind of sensible and balanced China policy that the United States and the world need.