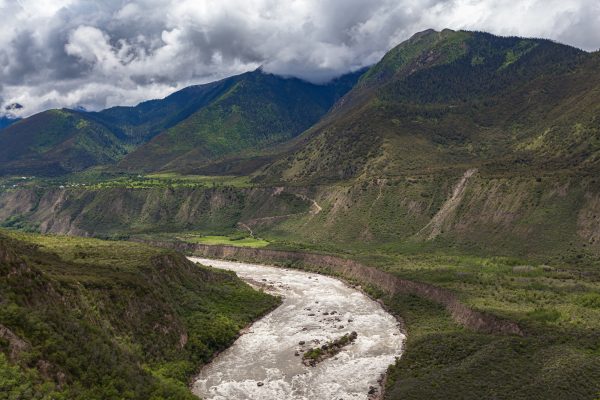 Water — one of the most vital natural resources on the planet — is taking center stage in India’s Northeast and is gradually becoming a weapon of geopolitics. A mass movement engineered by the Assam-based Krishak Mukti Sangram Samiti (KMSS) has demanded a stop to all mega dam projects in the country’s sensitive Northeast. While some of their apprehensions are legitimate, the fact is that the rich blue resource of the expanse — awashed as it is with the white waters of the Tibetan plateau — would not only be a power reservoir for the region, but also for the rest of India. The protest that began in Assam, led by the KMSS, against the construction of mega dams is leading to a novel conflict between development and demography.

The problem came into the spotlight with concerns about China undertaking a huge project to construct five dams in Shannan Prefecture in the Tibet Autonomous Region (TAR). The precise locations of the project are reportedly in Gyatsa, Jieuxu, Langzhen, Zangmu, and Zhongda in the TAR. The dams are slated to divert the waters of the Brahmaputra  River (Yarlung-Tsangpo in Tibet) to China’s water-scare northwestern and northern provinces.

The damming of the Brahmaputra started on November 12, 2010, which marked the formal beginning of the 7.9 billion RMB Zangmu Hydropower Station. The 3,260-meter Zangmu project, with a capacity of 510 MW, became fully operational on October 13, 2015. Earlier, in January 2013, China had approved three more dams on the river as part of its 12th Five Year Plan. The Dagu (640 MW) and Jiexu (560 MW) dams were to be constructed upstream of Zangmu and the Jiacha Dam (320 MW) downstream. On March 11, 2021, China adopted its 14th Five-Year Plan, which included a blueprint amounting to billions of dollars worth of projects, including controversial hydropower projects on the Brahmaputra in the TAR.

China is embarking upon ambitious “dam-constructing exercises” on all its important rivers. The familiar Three Gorges Project across the Yangtze River is one such project.

The urgency of undertaking such projects comes from the need to correct the uneven distribution of water in the country, which originated with Mao Zedong’s plan in 1950s to transfer water from the south to the north. China’s South-North Water Transfer Project is a decades-old enterprise, implemented in order to maximize the water resources available in the country. Whereas the primary thrust is geared toward the diversion of waters from the Yangtze River to the Hai and the Yellow Rivers, the sketch to divert the waters of the Brahmaputra River’s upper waters in Tibet, is a cause a alarm for not only India, but environmentalist all over the globe.

The plan to divert the waters of Brahmaputra would affect over 140 million people who are dependent on the river. Indeed, it would be India and Bangladesh that would have to bear the brunt of the planned damming and diversion. There is great apprehension that the diversion of the waters would affect the downstream flow in Northeast India and beyond. China has denied this, stating that it would not reduce downstream water flow.

Li Chaoyi, the chief engineer of China Huaneng Group, which was the prime contractor of the dam project, said that the river’s flow would not be affected by the construction of the dam. Quoted in the official Chinese news agency, Xinhua, Li stated, “After it becomes operational, the river water will flow downstream through water turbines and sluices. So the water volume downstream will not be cut.” He also stated that environmental protection would be a priority.

Nevertheless, the issue of the dam remains a cause of great concern for India and was taken up in the 2010 India-China strategic dialogue that took place between the then-Indian foreign secretary, Nirupama Rao, and the then-Chinese vice-foreign minister, Zhang Zhijun, in Beijing. Rao stated that she took up the issue of the dam, and was reportedly reassured by Zhang that “it was not a project designed to divert the water and affect the welfare and availability of water to the countries in the lower reaches.” But, notwithstanding such assurances, the fact of the matter is that there remains widespread concern about the “diversion.”

Furthermore, it is to be noted that Beijing has embarked on an inequitable “development” project in Tibet. Tibet’s towering altitude, craggy terrain, and hostile climate are geared toward the sustenance of livestock farming and traditional agriculture, activities that have kept the high landscape of the “Roof of the World” more or less unharmed. But Beijing’s policy of fast-track development driven by an industrial model that is not in consonance with the Tibetan topography is destroying the delicate ecosystem of the Tibetan plateau. It is also threatening to brutally alter the natural hydrological regime of Tibet.

Experts are also of the opinion that increased urbanization and infrastructural development, by way of construction like the Qinghai-Tibet Railway, could add to the adverse effects of global warming. Such moves would have a direct impact on the rivers that snake into Arunachal Pradesh and the crucial glacial mass, which is fast receding. Such developments suggest that the waters that feed the riparian states could eventually run dry and sound the death knell for both India and Bangladesh.

Wary of the downstream impact of the dam that is being constructed by China in the Tibet Autonomous Region, the Assam government decided to move past New Delhi and take up the issue with China. In the meantime, in the face of both the Chinese dam project and another project in the region, the Lower Subansiri Hydro-Electric Project by the National Hydroelectric Power Corporation in Gerukamukh, several political factions including the BJP demanded a halt to the project, stating that the construction of the dam would pose grave danger to the people of Assam’s Dhemaji, Lakhimpur and Jorhat. The parties pointed to the high seismic potential that threatens the region, and has asked for a mutually acceptable water agreement between India and China.

The government of India instituted an Inter-Ministerial Group in order to study the sub-basin environment impact in the Brahmaputra. New Delhi also clarified that the majority of the hydroelectrical projects that are being taken up in Arunachal Pradesh are to be implemented as run-of-river schemes and would have very limited roles in triggering floods in downstream areas. But a feasibility study of the schemes that are being planned must be taken up for the Lohit basin by the Ministry of Environment, Forest, and Climate Change. Only with a thorough understanding of the social and environmental consequences in mind can water resources be correctly harnessed for equitable development.