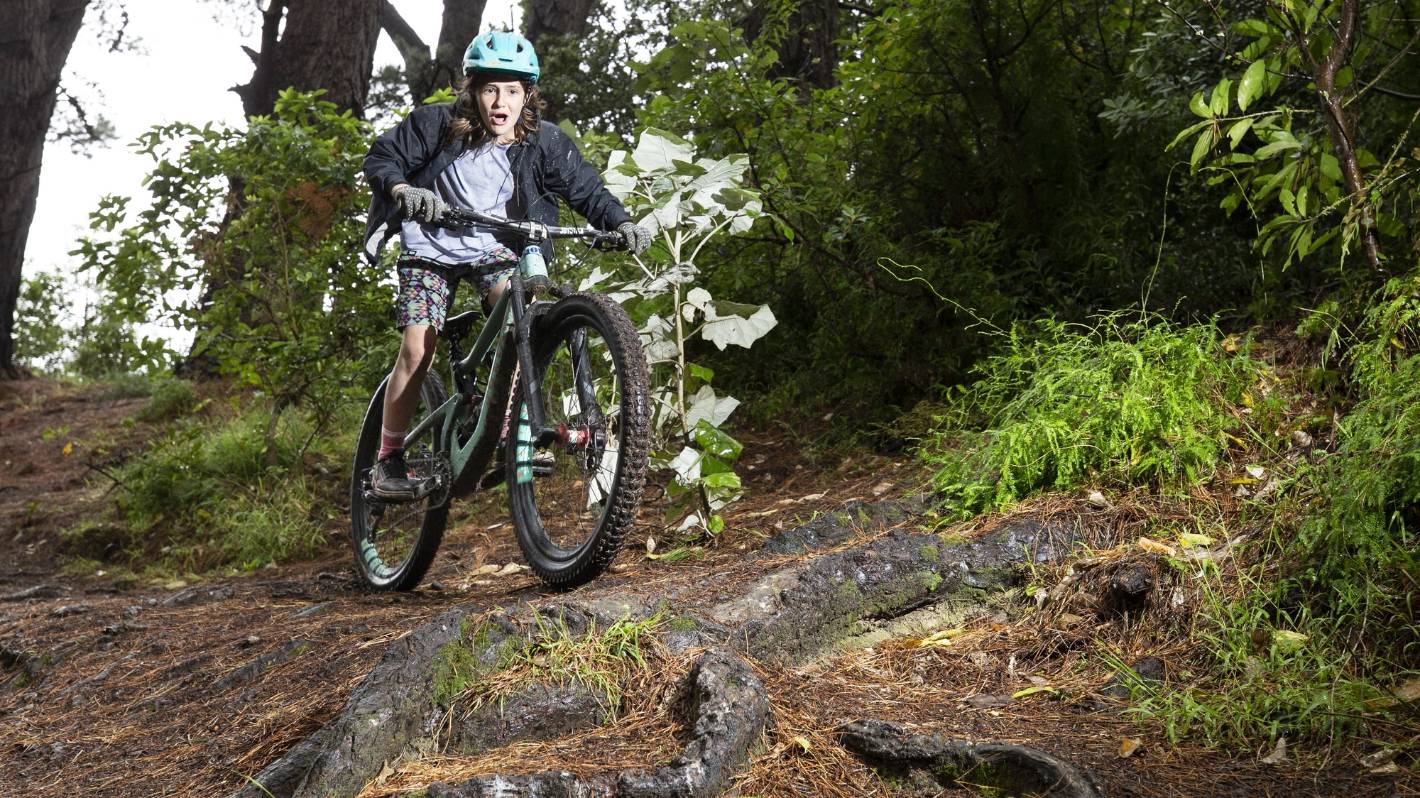 Bel Capie rolls her mountainbike into a steep dirt chute in Matairangi/Mt Victoria, keeping her heels dipped low behind her pedals and her arms bent to absorb the impacts of the trail.

Judging by her grin, the 10-year-old is completely in her element.

The first time she was mistaken for a boy while out riding, she thought it was funny. But when it kept happening she began to reflect on the preconceptions behind it.

“It means people assume girls aren’t very good at this stuff. That it’s a boys sport. At races, if they haven’t been seeded, they just put the boys in front and that’s frustrating because I have to overtake all of them.”

Bel recently gave a speech in her year 6 class on gender equality in sports, after her teacher set the topic, Things would be better if…

In researching the speech Bel discovered an analogy of conditioning that hit home with her own experiences.

“A gentleman was walking through an elephant camp, and he spotted the elephants weren’t being kept in cages or held by chains. All that was holding them back from escaping, was a small piece of rope tied to one of their legs. He was confused as to why the elephants didn’t just use their strength to break the rope. He asked a trainer nearby why the elephants never tried to escape. The trainer replied, ‘When they are very young and much smaller, we use the same size rope to tie them and, at that age, it’s enough to hold them. As they grow up, they are conditioned to believe they cannot break away’,” Capie told her class.

The weekend before her speech, Bel rode in Revolve Cycling’s Women of Dirt event at Makara Peak mountain bike park.

Revolve has been hosting women-only races for more than a decade. While November’s event was capped at 60 riders due to Covid restrictions, the races regularly draw up to 100 women.

Revolve co-president Meagan Robertson said the consistently high turnout showed the attraction of an event where women were the focus.

Isla Day instructs mountainbike skills classes for the Wellington Off Road Department (WORD), including those for younger girls, which Bel attends.

Day said she was aware that other race organisers were working hard to attract greater participation in women’s categories, but the disparity between mixed events and Revolve’s races showed there was still plenty of work to be done.

Of the 325 students enrolled in WORD, about 30 per cent are girls. The organisation hopes to achieve an even split of students in the not too distant future.

Day said the opportunity to ride in girls’ groups and to be mentored by skilled women riders allowed her young students to see themselves as part of a broader community of riders.

“I’m really excited that we’re getting all these girls out there and are creating a sisterhood that girls can belong to.”

She looks forward to a day when groups such as Revolve and WORD do not have to take such deliberate measures to encourage women and girls to get out on the trails.

“Right now we split our groups by gender because it results in more sign-ups, but in the long term we wish that we didn’t have to do that. To achieve a 50/50 split would be my dream.”

Bel said it would be “really awesome” if there could be an equal amount of girls riding and she wanted to encourage others to defy any expectations of their gender.

“No matter how much you’ve been told you can’t do or be what you want because of your gender, always continue with the belief that what you want to achieve is possible. You can break the rope.”