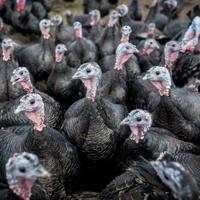 But what to call the new import? Europeans in the New World were overwhelmed by the new plants and animals they saw, and often used familiar names for unfamiliar species. The Spanish, for instance, thought turkeys looked like peacocks, so they used the Spanish word “pavos.” The French called them “poules d’Indes,” or Indian chickens, later shortened to “dinde.”

To the English, the newly discovered American birds looked like the guineafowl — a bird native to Africa but which was introduced into Europe by Arab and Turkish traders in the 14th and 15th centuries.

And it is this point in the story that the modern-day turkey gets its name.

The Ottoman Empire was then at its height. Ethnic Turks, based in Constantinople (now Istanbul), ran the empire that spanned the Near East, Middle East and North Africa. As a result, to many Europeans, anyone from “the East” was a “Turk.”

Because Ottomans dominated trade in the eastern Mediterranean, a lot of produce coming to Europe was seen as “Turkish.” So a precious stone from Persia was named “Turkey stone,” and the French version of that name, “pierre turquoise,” gave us the word “turquoise.”