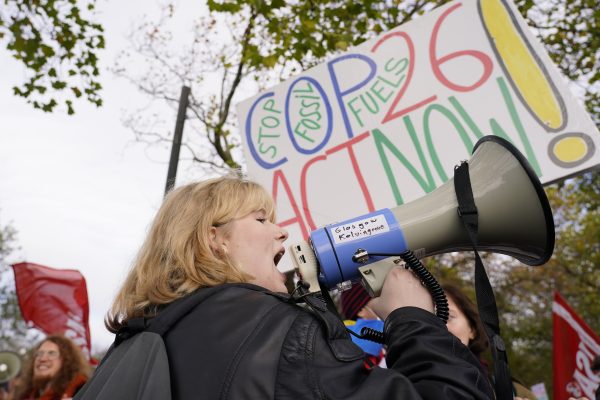 Equitable climate finance for developing countries to meet their climate goals is a defining issue at the U.N. Climate Change Conference, COP26, in Glasgow this month. In the run-up to the conference, the United Kingdom COP26 presidency announced that developed countries will be three years late in delivering on commitments they made in the landmark 2015 Paris Agreement at COP21 to provide $100 billion per year in climate finance for developing countries. For small island nations in the Pacific and Indian oceans, rising sea levels are an existential threat that they cannot face without assistance. For other countries in Asia, extreme weather events driven by climate change, including heat waves, droughts, and cyclones, pose growing threats that they are ill-prepared to mitigate and adapt to.

Even if rich countries were on track to meet their existing commitments, financing would fall far short of matching the challenge at hand. The International Renewable Energy Agency estimates that the energy transition to a low carbon economy will require an investment of $4.4 trillion per year between now and 2050. Leading states need to not only surpass their existing commitments at COP26 in Glasgow, but they must also address the largely overlooked corruption risks that are inherent in such massive public spending. Otherwise, a significant portion of the funds may be stolen by venal officials and their collaborators at a critical moment when every dollar counts.

Equally important are private funds, which account for the majority of climate investments at around 56 percent worldwide and are primarily invested in countries where corruption risks are low. Mobilizing private actors to invest in climate-related initiatives in developing countries will require greater assurances that their investments are protected from corruption. Without adequate procurement safeguards and effective anti-corruption enforcement mechanisms, climate investments may be degraded by corruption and the international community’s ability to combat climate change will be severely diminished.

Examples of transnational illicit financial flows from environmental crimes abound. The multi-billion-dollar Global Environment Facility, a fund set up in 1991 as part of the World Bank, has been plagued by accusations of corruption, including a whistleblower complaint in 2019 alleging the misappropriation of millions of dollars related to a project in Russia. The U.N.’s Reducing Emissions from Deforestation and Forest Degradation (REDD+) program, created in 2005 to help developing countries combat climate change through the conservation and sustainable management of forests, has seen its projects plagued by corruption, too. In Indonesia, three REDD+ projects were compromised by illegal logging, mining, and palm oil planting because private companies bribed local officials to ignore U.N. regulations.

The 187 countries that are party to the U.N. Convention Against Corruption (UNCAC) are required to have laws criminalizing many forms of corrupt conduct, but corrupt national leaders – known as kleptocrats – who control the administration of justice in many countries engender impunity for corruption. The recently published Pandora Papers – and previous major leaks of financial records, including the Panama Papers – highlight the immense scale of modern kleptocracy. The latest leak of 11.9 million confidential files from 14 financial service providers illustrates the complex transnational networks of lawyers, bankers, accountants, real estate agents, art dealers, and other types of professional enablers who conceal the staggering and suspect wealth of public figures and economic elites. The investigation, the largest of its kind in history, reveals the secret finances of more than 330 politicians from over 90 countries, including 35 current and former heads of state.

Among those implicated were Pakistani Prime Minster Imran Khan’s inner circle, including cabinet ministers, their families, and financial backers who own offshore companies and trusts holding millions of dollars. Khan harnessed public outrage with the corruption of his predecessor, Nawaz Sharif, to win election in 2018. In 2017, Pakistan’s Supreme Court removed then-Prime Minister Sharif due to his family’s offshore assets revealed in the 2016 Panama Papers. Sharif was the only public official convicted as a result of the Panama Papers reporting. In his victory speech after the 2018 election, Khan said, “Our state institutions will be so strong that they will stop corruption. Accountability will start with me, then my ministers, and then it will go from there.” Unfortunately, the new Pandora Papers reveal that the system of corruption has not significantly changed in Pakistan or elsewhere.

The top recipients of public climate finance are among the riskiest places in the world for corruption, governed by the type of leaders whom the Pandora Papers indicate are able to launder and hide their ill-gotten gains abroad using trust companies in South Dakota, fiduciary firms in Switzerland, and luxury real estate everywhere from London to Los Angeles. None of the top 10 recipient countries, which together received 41.9 percent of all climate-related public development assistance in 2017, have good records on corruption and six are in the bottom half of Transparency International’s Corruption Perceptions Index. Bangladesh, Uganda, and Ethiopia are among the world’s least developed countries and the most at risk for corruption, yet they are the second, eighth, and ninth leading recipients of climate developmental assistance. India, which receives the most climate-related assistance by far, is ranked 86th on the Corruption Perception Index for 2020.

The U.N.’s main financial mechanism to channel the $100 billion per year committed to assist developing countries combat climate change, the Green Climate Fund (GCF), has minimal safeguards against corruption. Once an entity has been accredited and approved to receive GCF funding, there are limited provisions to follow up on compliance and thus no way to know if contractors are complying with their commitments. The U.N. did create an independent integrity unit to deter and investigate occurrences of corruption of GCF-funded programs. But it has no enforcement mechanisms and can only call on domestic courts to prosecute individuals for violating GCF contracts. Unfortunately, local courts can be co-opted by corrupt state officials.

The procurement processes for major funds like the GCF must be improved. Transparency International rightly argues that mandating public disclosure requirements and the involvement of civil society throughout procurement processes would reduce opportunities to obscure corrupt deals in the first instance and requiring audits would improve follow-up on compliance. However, transparency alone will not prevent grand corruption. Filling the global enforcement gap in the international anti-corruption framework is essential to combat grand corruption and therefore ensure public finances are used for their intended purposes to address climate change, pandemics, sustainable development, and all other manner of paramount public issues.

The ubiquitous impunity for grand corruption in many countries highlights the need for an International Anti-Corruption Court (IACC) that, operating on the international legal principle of complementarity, would have jurisdiction to prosecute kleptocrats and their professional enablers when national governments are unwilling or unable to do so. The court would also have the potential to recover and repatriate stolen assets for the benefit of the victims of corruption. Where the repatriation of assets to entrenched kleptocracies would risk funds being re-captured by corrupt officials, the IACC could repurpose the assets, directing them toward humanitarian or refugee services that benefit the citizens of the countries where the funds were stolen.

Kleptocrats are unlikely to join an international court that would directly threaten their impunity, but an IACC would not need kleptocracies to become member states for the court to be effective. Public officials and politicians who plunder state funds prefer to stash their illicit wealth in assets located in countries with the rule of law where they are, ironically, secure from the predation of other corrupt actors. The IACC would therefore be effective with a small number of founding member states, so as long as they include some of the world’s financial hubs such as Switzerland and Singapore, through which kleptocrats often launder the proceeds of corruption.

Momentum behind the IACC is growing. In June, more than 125 world leaders from over 45 countries signed a Declaration calling for the creation of such a court. Both the Liberal and Conservative party platforms for the September federal elections in Canada included commitments to advance the IACC proposal. Further high-level interest in the court is developing in countries in Africa, Asia, Europe, and Latin America that have been rocked by corruption scandals and related demonstrations of public outrage in recent years.

The climate change movement should recognize the threat grand corruption poses to achieving its goals. Developing nations stand to pay a disproportionate price for the effects of climate change, despite having contributed the least to the problem and having the least resources to mitigate it. Global governance structures in general remain little changed since the post-World War II period. Left largely unreformed, they have drifted from their original purposes and, more importantly, they have failed to evolve to meet contemporary crises. To take climate change seriously, governments must both boost climate investments and develop novel global governance solutions like the IACC to protect them.