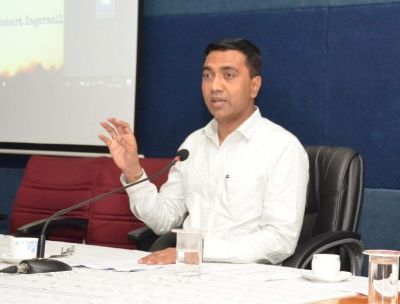 Panaji: Amid the rising concerns over the new covid variant, Omicron, Goa Chief Minister Pramod Sawant on Wednesday informed that the state administration has admitted suspected (Omicron) cases. The suspected cases have been detected in Russia returnees who came to the state via Delhi, the Chief Minister further informed.Also Read – Chewing Gum: A Plant Based Chewing Gum Can Reduce COVID-19 Transmission | Must Watch

Talking to media, Sawant said, “We have suspected Omicron cases who are Russia returnees to Goa via Delhi. We can’t call them Omicron cases directly. Their reports are awaited, all of them are in isolation.” Also Read – Delhi Pollution: Govt Extends Bans on Truck Entry Till Further Orders

“We admitted them as suspected (Omicron) cases after 12 days. They are Covid positive, their samples sent to Pune (for genome sequencing), reports awaited. All precautions being taken,” he added further. Also Read – COVID-19: India Adds Ghana, Tanzania to List of ‘At-Risk’ Countries

The Chief Minister further urged the people to avoid any panic situation, and asked them to “vaccinate as much as possible.”

To recall, five sailors, including Russian and Georgian nationals, had earlier also tested positive for Covid with Omicron-like symptoms after they arrived in Goa. They were travelling onboard a cargo ship which had embarked from South Africa and is currently in Goa’s Mormugao Port Trust, since November 18, reported news agency IANS.

However, according to Chief Minister, there are less chances of the five persons, including Russian and Georgian nationals, quarantined earlier this week in Goa, of being diagnosed with the Omicron variant of Covid.

“They tested positive (for Covid) 12 to 13 days after arriving in India. There is a less chance of them (having contracted) Omicron…We have taken all precautions related to Omicron. The samples have been sent to Pune, they have been isolated. Their health is OK. They have no problems,” Sawant told reporters here.

Meanwhile, at least 21 cases of Omicron variant of COVID-19 have been reported across the country. Out of these 21 cases, nine have been reported in Rajasthan, eight in Maharashtra, two in Karnataka and one each in Delhi and Gujarat.

The new variant of COVID-19 was first reported to the World Health Organisation (WHO) from South Africa on November 25. As per the WHO, the first known confirmed B.1.1.529 infection was from a specimen collected on November 9 this year.