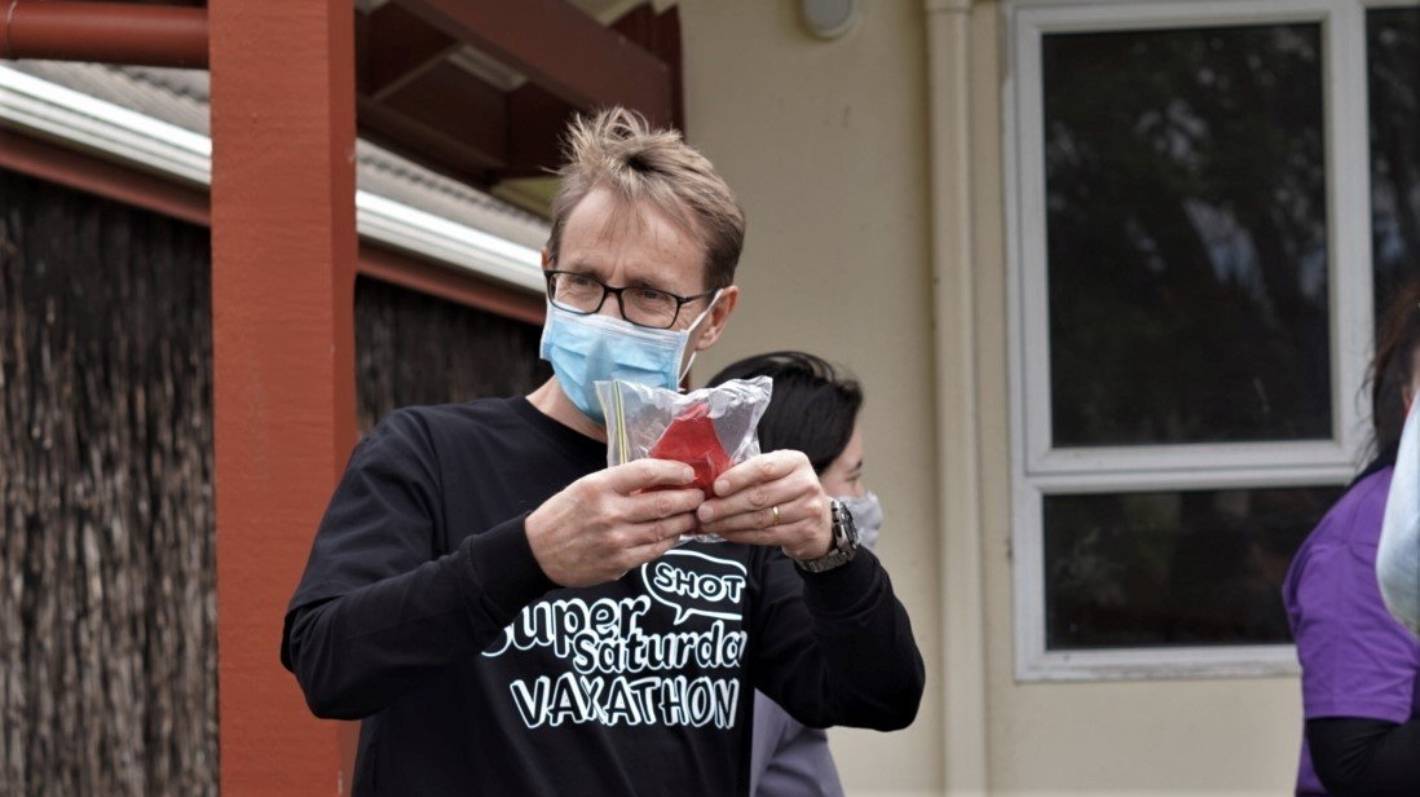 The result smashes the previous record set on August 26, when 92,164 jabs were given.

Health Director-General Dr Ashley Bloomfield was thrilled with the day, which included 39,024 first doses and 90,971 second doses. Auckland now has 89 per cent of its eligible population with at least one dose.

“People have turned out in droves to the 783 vaccination sites around the motu for their vaccinations – from free hangi at Pôtahi Marae in Northland’s Te Kao to vaccinations on the TSS Earnslaw on Lake Wakatipu in Queenstown,” Dr Bloomfield said in a statement after vaccinations stopped at 10pm.

“It’s fantastic that Auckland has enjoyed its biggest ever vaccination day with 8957 people getting their first doses and 31,686 people receiving their second,” Dr Bloomfield said.

“It’s also the biggest ever day for Māori vaccinations with 10,941 first doses and 10,874 second doses. I want to thank Māori providers for the enormous amount of mahi that has gone into making today such a success.

“It was also a great day for the Pacific community with 4223 first doses and 8093 second doses.”

Breaking down the numbers

Super Saturday is not only the most successful Saturday for doses given; by 7pm, 36 per cent more doses had been given than on any other day of the vaccination roll-out.

The previous biggest day of the roll-out was August 26, when 92,164 doses were given.

Super Saturday also moved the vaccination rate to 85 per cent of the eligible population for at least one dose, and 65 per cent were fully vaccinated with two.

“Even if you were not able to get out and get a jab today, don’t worry, there are still lots of opportunities to get vaccinated, with the usual huge range of vaccination sites continuing to operate as normal across the motu beyond this weekend.

“Super Saturday has been a shot in the arm for the final stage of our Covid-19 vaccination programme and we now need to finish the job to protect all New Zealanders from the virus.”

It was also the biggest day for first doses in a month, with 39,024 people getting their first jab, although this was far off the peak reached in late August when up to 66,000 people a day were lining up for a jab.

Looking at the DHBs, Hawke’s Bay and West Coast had the highest turnout by population, managing to deliver vaccines to 4.4 and 4 per cent of their populations by 6pm, respectively. Some DHBs that have been lagging had relatively high turnout too, including Lakes (3.2 per cent) and Northland (3.1 per cent).

Tairāwhiti, which currently has the lowest first-dose rates in the country (71.3 per cent) and is home to many isolated, rural communities, also had the lowest Super Saturday turnout. Even there, though, nearly two per cent of the population have had either a first or second jab today.

Speaking more broadly, she said the most important thing was the first doses, so Kiwis should all be trying to help friends and family who hadn’t yet had their first jab.

“If you haven’t got your first dose yet, please remember, it will be five weeks before you are fully vaccinated.”

This was because recipients had to wait three weeks between jabs, and it took two weeks after the second jab to reach peak immunity.

On the ground in Auckland

Auckland – which continues to be the epicentre of the Delta outbreak and see the vast majority of daily cases – has had almost 35,000 jabs delivered, according to the Ministry of Health.

The marae itself more than doubled its vaccinations today, nearly reaching 500 on Saturday afternoon, when normally they wouldn’t get 200 on a weekend.

Andrews said the incentives make all the difference, as well as the gradual realisation that without high vaccine coverage there is no leaving lockdown.

“It means we’re taking more steps forward to protect our whānau and the wider community,” she said.

Elsewhere, this was how Super Saturday was received in Wellington and Waikato.

‘We want to keep our baby safe’

Nathaniel Maafu, 22, and Mikayla McMahon, 21, got their first doses on Saturday at Manurewa Marae.

The couple have a six-month-old daughter, and McMahon said she wanted to keep her safe.

“We have a lot of kids and babies in our family, so I didn’t want to pass it on,” she said.

“I wasn’t all for it, but now that I have it, it’s a big relief off my shoulders,” McMahon said.

Maafu said before today, he had people telling him he was “ruining it for everyone,” and warning him about the elderly at risk.

“I wasn’t anti-vax, but I wasn’t for it either. But seeing everyone get it, and nothing’s happened, I thought I may as well try it out,” he said.

“In a way that pushed me to come here too, but mostly it was my own choice. I felt like a minority not having the vaccine.”

During a televised Vaxathon, a number of celebrities added their voices to the cause, including Lorde and Taika Waititi.

Lorde was due to play a series of shows around the country this summer, but said it all depended on Kiwis getting vaccinated.

“I cannot wait to come and play a concert, I want to be sweaty, and dancing and maybe not even wearing masks. Hopefully we can get there,” she said.