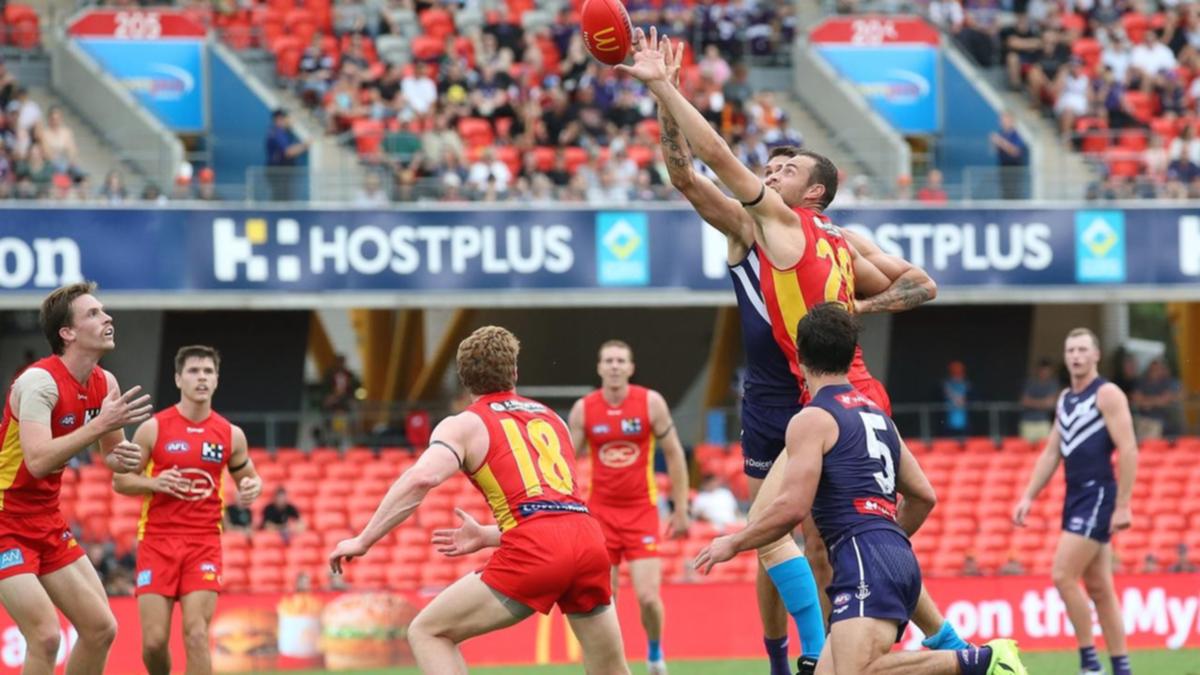 In wet conditions, the Suns restricted the high-flying Dockers to just four goals as they backed up last weekend’s win over Sydney at the SCG with a 10.9 (68) to 4.9 (33) victory on Sunday.

The win lifts the Suns to a 4-5 record and to the fringe of the top eight while Fremantle’s loss is just their second of the season.

The Suns’ win was set up by their dominance at ground level, with Izak Rankine failing to kick a goal but having a hand in 11 score involvements.

Young guns Noah Anderson (26 disposals) and Matt Rowell (eight tackles) were among the Suns’ best while another ex-Richmond player Brandon Ellis (21 disposals, seven marks, four clearances) had one of his best games in a Suns jumper.

Co-captains Jarrod Witts (29 hitouts, eight tackles) and Touk Miller (34 disposals, eight tackles, 10 clearances) were also superb for the hosts, including a rare goal for Witts in the first quarter, while ex-Docker Sam Collins was a mountain in defence.

Fremantle, playing without Michael Walters (health and safety protocols), Sam Switkowksi (concussion) and Nathan O’Driscoll (foot), had 19 inside-50s and kicked two goals in the first quarter to hold a two-point advantage at the first change.

Despite continuing to dominate the inside-50 count, Fremantle didn’t score another goal until Sean Darcy’s snap in the 21st minute of the fourth quarter.

The only real highlight for Justin Longmuir’s team was a first AFL goal for Neil Erasmus in the first term, with the Dockers left with plenty to ponder on their trip back to Perth.

Fremantle host Collingwood at Optus Stadium next week while the Suns head to Ballarat to face the Western Bulldogs.