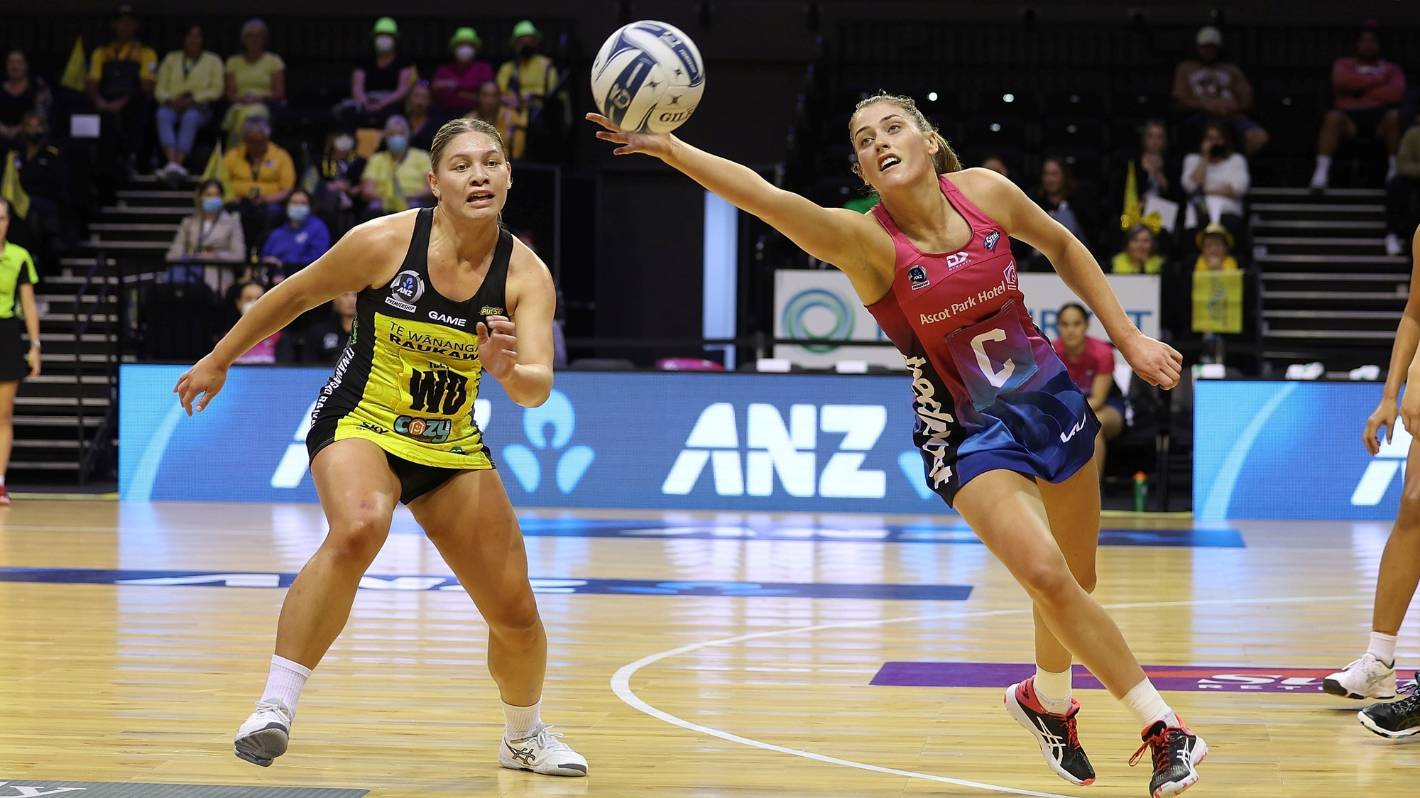 Steel centre Kate Heffernan pulls in an intercept during the first quarter against the Pulse.

There was only one match played on the fifth weekend of the ANZ Premiership, but it had enough drama for four of them.

An understrength Southern Steel side came from 11 goals down with under 12 minutes to play to stun the Central Pulse 66-63 in extra time at TSB Bank Arena in Wellington.

The Steel were missing midcourter Ali Wilshier and defender Te Huinga Reo Selby-Rickit as well as their coach Reinga Bloxham due to Covid-19 isolation, but with assistant Jo Morrison taking the helm, they pulled through for an against-the-odds win.

Netball historians uncover the incredible story of the woman behind a name on a team list.

The Pulse began the contest with an 8-1 run, then led by 11 three minutes into the final quarter, but their shots dried up as the Steel went on a 16-5 run to level the scores with just over two minutes to play.

Tiana Metuarau put the Pulse ahead with 32 seconds to play, but Georgia Heffernan responded with seven seconds to play to tie the scores at 59-all and send the game to extra time.

The Steel took their first lead of the night as the first of two added three-minute periods began and held a two-goal advantage as it ended, after a crucial intercept by Sarahpheinna Woulf.

A held-ball call with just over two minutes to play gave the Pulse a chance to tie the game up, but after a series of three consecutive turnovers – two of them won by the Steel – the final result went the southerners way.

Steel captain Shannon Saunders said on Sky Sport afterwards: “We made it so hard on ourselves”.

“We had so many errors in those first three quarters, but it was really awesome to see us individually step up.

“I thought as a unit on defence, they got some amazing ball and worked so well together, and on attack we finally got our stuff together.”

The other three matches in round five were postponed as Covid-19 continues to hit the competition hard.

Steel goal keep Sarahpheinna Woulf came up with a crucial pair of turnovers, one in each period of extra time, as her side pulled off a remarkable comeback.

With just over a minute to play in the second period of extra time, Woulf got a hand to a circle feed from Erikana Pedersen and denied the Pulse a chance to level the scores. The Pulse got the ball back with the situation the same, but Kate Heffernan came flying through to win the ball and the Steel rode the game out from there.

8/10: A point or two is docked because the Pulse looked to be cruising for large stretches of the first four quarters, but any game that is alive in the final minutes, then goes to extra time, is a winner.

The Pulse have now had a one-goal loss, a one-goal win, and a extra time loss in their last three matches. They now face the Magic, the team they beat, in Rotorua on Monday. The Steel will head home and hopefully get their absentees back as they prepare to host the high-flying Mystics on Sunday.