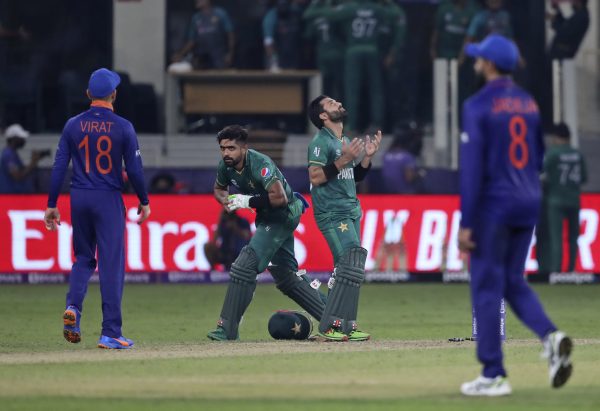 Sunday’s matches finalized the semifinalists for the ongoing ICC Men’s T20 World Cup in the UAE, with Pakistan, New Zealand, England, and Australia making it to the final four. The Super 12 stage of the  cricket tournament saw some world class matchups and enthralling performances that made headlines across the participating nations.

In South Asia, the cricketing narratives were also loaded with political undertones over the past fortnight. In fact, the political impact began even before the matches did, as the Indian government’s mishandling of the COVID-19 crisis saw the ICC T20 World Cup – originally slated to be hosted in India –moved to the UAE.

Group 2 of the Super 12 stage was the center of much hype, with an India-Pakistan clash opening the pool. Pakistan’s thumping win in a lopsided contest broke a jinx spanning 29 years and 12 contests as the country beat its archrival for the first time at a cricket world cup. The historic occasion fanned the embers of jingoism on both sides of the border.

Pakistan’s Interior Minister Sheikh Rashid termed the cricket triumph a “victory of Islam.” The toxic merger of hypernationalism and Islamism was on display in reaction to the victory, with cricket legend Waqar Younis praising Pakistani wicketkeeper batsman Mohammad Rizwan for offering the Islamic prayer “in the midst of Hindus” during the match.

“Unfortunately, such has been the indoctrination of three generation of Pakistanis, through school curricula and media narratives, that everyone from politicians to athletes sees Pakistan as ‘Muslim’ and India as ‘Hindu,’” writer and commentator Sania Arif told The Diplomat. Such a framing is “completely discarding Pakistan’s Hindu population as its citizens, and treating India’s Muslims as ‘Pakistanis at heart.’”

This sentiment was expressed by another former fast bowler, Shoaib Akhtar, at an event in the lead up to the Pakistan-India encounter. Akhtar responded to former Indian spinner Harbhajan Singh’s comment that Indians and Pakistanis “are the same people” by saying, “I believe in the Two Nation Theory.” The theory that Muslims and Hindus of India constitute two distinct nations was the rallying cry of the 1940s Islamist movement that created Pakistan, and remains the root of the prevalent anti-Hindu bigotry in the country.

In recent years, however, the Two Nation Theory appears to have found backers in India since the Narendra Modi-led Bharatiya Janata Party (BJP) took power in 2014. The BJP is well-known for its embrace of Hindutva ideology, so it should be no surprise that anti-Muslim bigotry was on display after India’s opening defeat against Pakistan.

The only Muslim in India’s T20 World Cup squad, Mohammad Shami, received a surge of online abuse, prompting Indian great Irfan Pathan to issue a stern reminder that he was “never asked to go to Pakistan” during his playing days. Meanwhile, Kashmiris who cheered for Pakistan’s cricket team were charged under anti-terror law, while many Muslims who celebrated Pakistan’s win other faced repercussions, including being sacked by employers in accordance with the Unlawful Activities (Prevention) Act or UAPA.

“What’s happening in terms of associating cricket with religion and suppression of free speech is a conundrum. UAPA has created a chilling effect. It’s like double speak – Orwell’s ‘1984’ all over again,” said Shalini Singh, an Indian lawyer, writer, and editor of Shabdaaweg.

Following India’s second successive defeat against New Zealand, Indian captain Virat Kohli, who had issued a staunch defense of Shami, was targeted for being too focused on political narratives. Kohli, who had decided that India (like a few other teams in the tournament) would take the knee, a gesture against racial discrimination in sport rooted in the Black Lives Matters movement in the U.S., was asked to “stick to cricket.”

“This particular incident is definitely not a precursor. There have been incidents before and they will always. Wherever the [Information Technology (Amendment) Act] is involved, there are dissents and curbs. What the left view as backlash is also white noise for media and the right,” added Shalini Singh.

Despite being cricket’s, and South Asia’s, most heated rivalry, political narratives linked to the region weren’t only limited to India and Pakistan. The presence of Afghanistan, also in Group 1, meant that much of the focus was on a largely abandoned team, carrying a flag that is now banned in its country.

Afghanistan captain Mohammad Nabi broke down in tears while the national anthem was being played at the Sharjah Cricket Ground ahead of the team’s match with Scotland. Playing the first tournament since the August takeover of the Taliban, which wanted both the flag and the national anthem changed during the World Cup, the Afghanistan cricket team has had to contend with more than just the opponents on the field. Among the team’s off-pitch issues are the uncertainty over its own existence, a financial crunch at home, and opposition around the globe, with concerns over the effective ban over women’s cricket in Afghanistan, which has already pushed Australia to cancel its first ever Test match with the country.

“The Afghan people see [the national cricket team] as their only hope, which can bring them joy and happiness. The Taliban banned the three-colored flag of Afghanistan, which masses protested against. Some were shot dead and injured in different parts of Afghanistan by Taliban,” Afghanistan based activist Shafi Atal told The Diplomat.

Like other countries in the region, cricket has become a tool of nationalism in Afghanistan as well, for better or worse. While hypernationalism appears to rule over Indian and Pakistani cricket teams, with Islamism also targeting the Bangladesh side, for Afghanistan cricket is now a symbol of resistance against the Taliban. Even so, the Afghanistan cricket team, much like the country it represents, faced the blowback of the Indo-Pak rivalry.

The Afghanistan cricket team has been supported by the Board of Cricket Control in India (BCCI) and the country’s star players have been regular features of the lucrative Indian Premier League (IPL), which bars Pakistani cricketers’ participation. This has long been interpreted as a result of the Indian government’s close ties with the former Ashraf Ghani-led regime in Afghanistan, which was hostile to Pakistan.

After India beat Afghanistan in a must-win contest, much of Pakistan’s social media targeted the Afghan team with allegations of match-fixing along with racist anti-Pashtun slurs. It was only after Afghanistan failed to beat New Zealand on Sunday, confirming India’s exit from the tournament, that the spree of accusations against the Afghan side halted.

“Most Afghans don’t believe in Pakistan media and see them as supporters of Taliban. Whatever comes to Afghan public from Pakistani media even if it is true, people see it [as] propaganda,” maintained Atal.

At a post-match conference, Afghanistan captain Nabi had to repeatedly snub a Pakistani reporter insisting that Nabi give his take on the political developments back home. Pakistani media have taken a triumphant tone over the Taliban takeover in Afghanistan, an offshoot of the state’s uninhibited jubilation over the culmination of a decades-old strategy to gain regional clout by controlling matters in Kabul.

While Pakistan’s rulers had long hyphenated Afghanistan and India in matters of geopolitical sway and strategic depth, Group 1 of the Super 12 stage of the ICC World T20 also featured the country’s newest, and unlikeliest, nemesis: New Zealand.

In September, the New Zealand cricket team pulled out of its tour of Pakistan on the eve of the first cricket match after being alerted by the Five Eyes intelligence alliance of a security threat. England, also a member of the alliance, abandoned its scheduled visit to Pakistan last month, just before the start of the World Cup.

While the Taliban’s rise to power in Afghanistan had increased security challenges for Pakistan, with a threat alert also issued by the Punjab police, the nation as a whole felt betrayed by New Zealand. This was despite the fact that armed radical Islamists had raised the Taliban flag 10 kilometers from the cricket ground while New Zealand were in the capital. More recently, Pakistan has been held hostage during much of the World Cup by Tehrik-e-Labbaik Pakistan (TLP), which the government had proscribed as a terror group in April.

Following the jihadist attack on the Sri Lankan cricket team in 2009, Pakistan had gradually brought international cricket back to the country in recent years, hosting contests even amid an extremely volatile security situation. Where the Sri Lankan cricket team has vociferously backed Pakistan cricket, with the two countries’ bilateral ties emerging out of India’s political shadows, New Zealand’s abandonment threatened to derail much of the work that had been done for the resumption of international cricket in Pakistan.

Najam Sethi, a veteran journalist and political commentator who served as the chairman of the Pakistan Super League and then the Pakistan Cricket Board (PCB) from 2015 to 2018, believes New Zealand took a “bad and unpopular” decision in September. “But there won’t be any long term adverse consequences for Pakistan because [New Zealand and England] will return at the first opportunity to make amends,” Sethi told The Diplomat.

Many also believe that the New Zealand’s abandonment of the tour actually helped galvanize the Pakistan cricket team, which remains the only unbeaten side in the tournament. However, those focusing on purely on-field matters attribute much of Pakistan’s ongoing success to the calming influence of captain and batting superstar Babar Azam, who after overpowering the New Zealand side in the highly billed encounter at Sharjah, was seen gesturing to the crowd to cut short their chants of “security” aimed to mock the defeated team.

As Pakistan gear up for their semifinal against Australia on Thursday, Cricket Australia has confirmed that it will be touring Pakistan in March, ending a 24-year absence. While the announcement suggests that world isn’t going to abandon Pakistan despite the pullouts ahead of the World Cup, Pakistan’s ties with India, which define so much of South Asian politics, remain mired in uncertainty – both on and off the field.

“India-Pakistan cricket encounters will be restored only after both governments normalize relations. That will happen one day but not soon,” Sethi said.