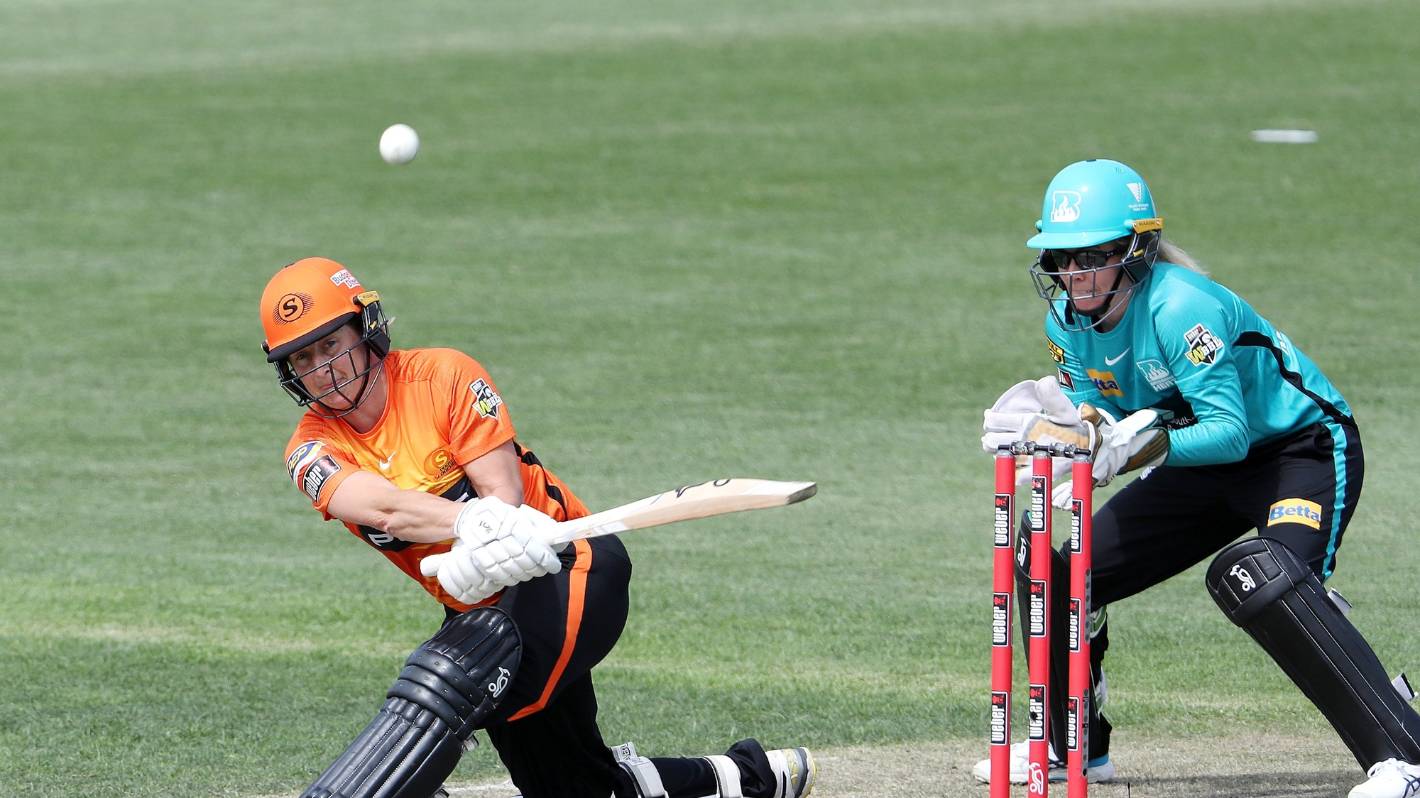 Sophie Devine hits out for Perth Scorchers against Brisbane Heat in Hobart.

A two-time Women’s Big Bash League (WBBL) player of the tournament, Devine stepped up to deliver victory for her Perth Scorchers in their season opener against Brisbane Heat in Hobart on Sunday.

Taking strike against Australian international left-arm spinner Jess Jonassen in the super over, with 13 needed for victory, Devine went 6, 1, 6 to clinch the win with two balls to spare.

The first delivery from Jonassen was a shocker, a waist high full toss which Devine smashed down the ground for six.

Then, after Devine and batting partner Beth Mooney each ran singles, Devine advanced on Jonassen’s fourth delivery and landed an off drive on the boundary rope for another six, and the victory.

It continued Devine’s perfect record batting in WBBL super overs: five of them for as many wins.

South African seamer Marizanne Kapp took two Brisbane wickets and conceded 12 off her over to give Devine a strong chance of finishing the job.

The Heat were without their White Ferns star Amelia Kerr who opted out of this season’s WBBL to continue focusing on her mental health, ahead of the Women’s World Cup in New Zealand next year.

Another top White Fern, Suzie Bates, also stayed home when due to join Adelaide Strikers, citing fears she may miss out on hotly contested managed isolation and quarantine (MIQ) spots in New Zealand at the end of the tournament.

Devine is the only current White Ferns international playing in the WBBL, having flown there from England after their recent series.

She said at the time she was prepared to gamble on securing an MIQ spot, for the experience of playing in Australia.

“It’s helped me grow as a player and it’s provided me with different experiences to be able to take back to the New Zealand environment which I think is incredibly important. This is one small risk that I’m prepared to take,” Devine told Newshub.

The eight-team WBBL got under way in Hobart and will visit Perth, Adelaide and North Queensland, with the final scheduled for November 27.