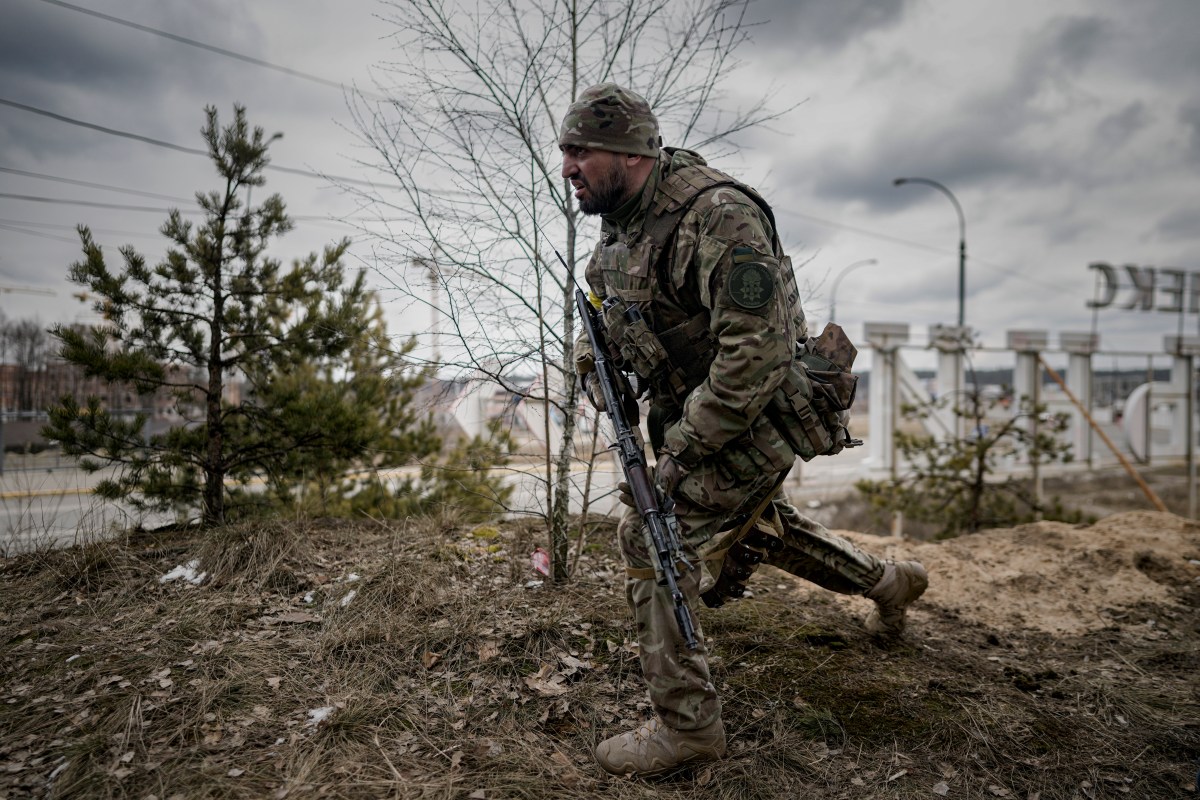 BRITISH soldiers who go AWOL to fight in Ukraine are putting the safety of everyone back home at risk, a minister warned today.

Armed forces minister James Heappey said troops who have abandoned their post to head to the conflict are being “spectacularly unhelpful”.

And he said their actions threaten our security as they could give Putin an excuse to claim the UK has entered the war.

He also issued a direct plea to ordinary Brits including veterans not to take up arms on behalf of Kyiv.

Mr Heappey warned people who travel will be stuck in a bloody war for the long haul and won’t be able to “get some Instagram shots then come home”.

The former army major, who served in Iraq and Afghanistan, said he understands why people have reacted to “sickening” TV images by signing up.

He said the bombing of a maternity ward in Mariupol by Russian forces overnight in which three people were killed was a “war crime”.

But he said there was no justification for serving personnel in particular to desert their duties.

Asked what fate awaits soldiers who have left, he replied: “They’ll be in an awful lot of trouble.

“It is illegal for a British service person to to go absent without leave in the first place.

“But to go absent without leave in order to fight in a foreign war is simply unacceptable and risks the UK being wrongly claimed by Russia to be a belligerent in this.

“Service people who might think that they are doing the right thing should reflect that it is 100% not the correct thing to be doing.”

He said that the Government believes “three or four” missing soldiers intend to go and fight in Ukraine.

But he added ministers don’t yet have concrete evidence that they’ve arrived in the country.

Mr Heappey said civilians including armed forces veterans should also stay at home and not go and fight.

He said: “No good comes from British service people or veterans going to Ukraine to be part of this.

“The Ukrainians have got huge amount of manpower in their arm, the Ukrainian nation has rallied to take up arms.

“The role that the West is playing is to provide them with the best weaponry that we can so that they can achieve their aims.

“This is not the time for people to be going there. Once you cross the border with the expectation to fight you’re in it for good.

“People who think they can go there, do a couple of weeks, take some selfies, get some Instagram shots then come home, that’s not the way the Ukrainians are viewing the people who go to fight for them.”

Brits have been given mixed messages over whether or not to go and join the battle.

Head of the UK Armed Forces, Admiral Sir Tony Radakin, has also urged Brits not to join the fight.

Kyiv has formed a foreign legion to help in the fight against Russia which has attracted 20,000 volunteers from around the world.

More than 60 Brits are thought to be amongst those who have crossed the border to to battle.

Mr Heappey said the “ferocity” of the Ukrainian resistance has stunned the invading Russians.

He added Kyiv’s forces are “slowing the Russians down and denying them almost all of their objectives”.

Moscow’s Air Force has been forced to largely stop flying during the day because it’s taking such heavy losses.

And now Britain is set to send the Ukrainians high powered Starstreak rocket systems that can down Russian jets at night.

The latest MoD intelligence update says: “There has been a notable decrease in overall Russian air activity over Ukraine in recent days, likely due to the unexpected effectiveness and endurance of Ukrainian Air Defence forces.”

It also says Russia’s massive 40-mile column north of Kiev “has made little progress in over a week and is suffering continued losses”.

There are fears the Kremlin could now turn to ever more barbaric methods, including chemical weapons, to terrorist Ukrainian civilians.

Mr Heappey warned Moscow the use of such means could even prompt the West into a military intervention.

He said: “President Putin needs to be very clear that when other countries have used chemical weapons it has caused an international response.

“I think he should reflect very urgently on what has happened to other countries where they have used them.”

In 2018 the US, Britain, and France launched rocket strikes against Syria in retaliation for the regime using chemical weapons on its own people.

The surgical attacks hit a scientific research centre and a chemical weapons storage facility with the aim of preventing future atrocities.

People who think they can go there, do a couple of weeks, take some selfies, get some Instagram shots then come home, that’s not the way the Ukrainians are viewing the people who go to fight for them.

Mr Heappey said the Kremlin won’t want a direct conflict with NATO because the alliance would “completely overmatch the Russian military both in terms of technology and mass”.

Yesterday Putin was forced into the extraordinary admission that conscript troops are now involved in the fighting.

He had previously promised that young soldiers doing their military service wouldn’t be drawn into the conflict.

British officials now believe that “as casualties mount, President Putin will be forced to draw from across the Russian Armed Forces and other sources to replace his losses”.

The Armed Forces of Ukraine says that more than 12,000 Russia troops have been killed in two weeks of fighting so far.

It also reports having downed 49 planes and 81 helicopters and having destroyed 335 tanks.

Help those fleeing conflict with The Sun’s Ukraine Fund

PICTURES of women and children fleeing the horror of Ukraine’s devastated towns and cities have moved Sun readers to tears.

Many of you want to help the five million caught in the chaos — and now you can, by donating to The Sun’s Ukraine Fund.

Give as little as £3 or as much as you can afford and every penny will be donated to the Red Cross on the ground helping women, children, the old, the infirm and the wounded.

The Ukraine Crisis Appeal will support people in areas currently affected and those potentially affected in the future by the crisis.

In the unlikely event that the British Red Cross raise more money than can be reasonably and efficiently spent, any surplus funds will be used to help them prepare for and respond to other humanitarian disasters anywhere in the world.