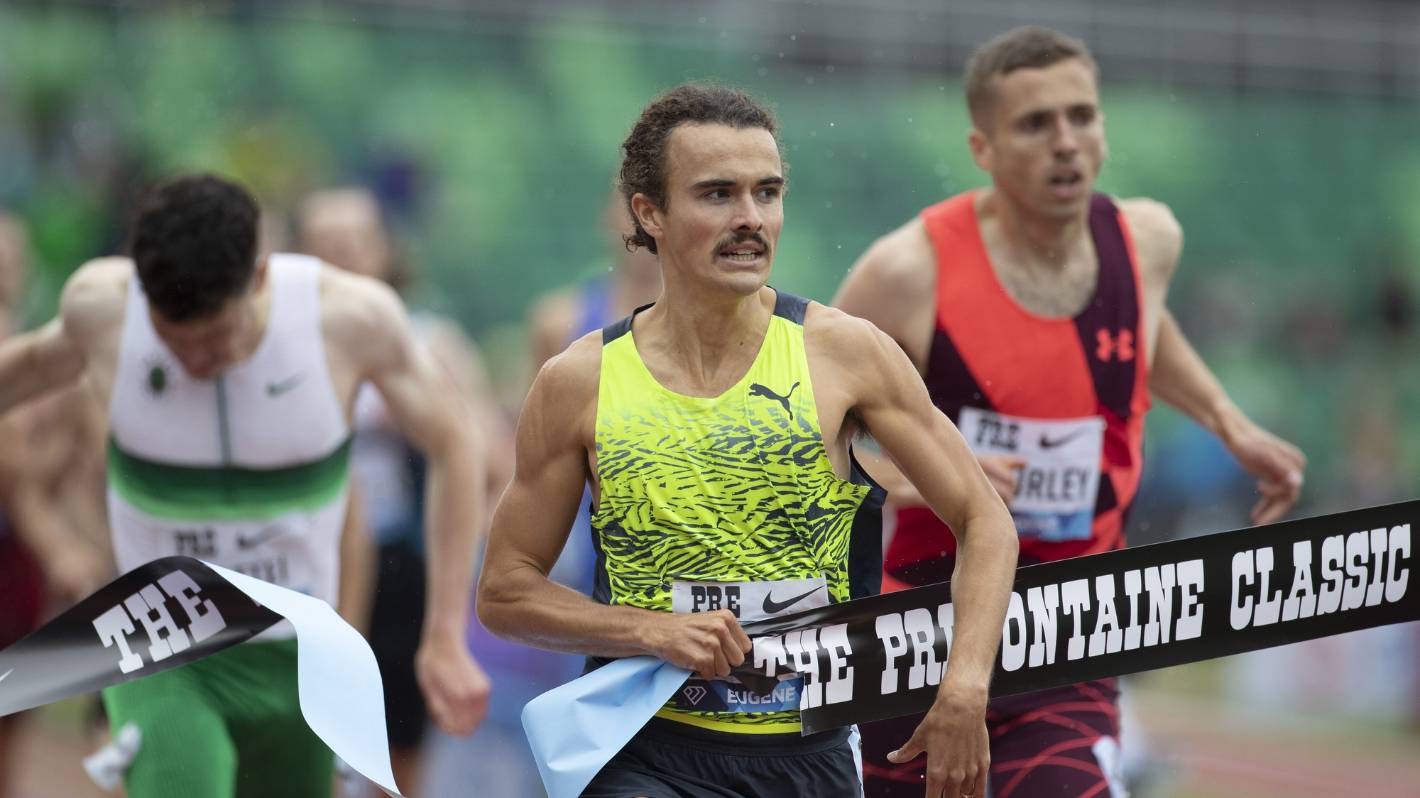 Sam Tanner crosses the the men’s 1500m finish-line for victory at the Prefontaine Classic in Eugene, Oregon.

The 21-year-old Bay of Plenty athlete was the big mover from the third Diamond League meet of the year in Eugene, Oregon as he nailed a sweetly timed victory in the four-lap event that should open two significant doors for him this year.

Tanner won the Prefontaine Classic 1500m in a PB of 3min 34.37sec which was notable on a number of levels. It dipped under the world championships standard of 3:35.00 which should see him added to the Kiwi team for the event to be held back at Hayward Field.

Tanner was an omission from the initial team of 18 announced for Eugene on May 13, but can be added at a second selection to be unveiled on July 1.

It will also confirm his spot at the Commonwealth Games which follow the July 15-24 world champs after he had been conditionally selected. The A standard for Birmingham is 3:34.80 and the B 3:36.00.

“It’s definitely a relief,” said Tanner, who trimmed 0.35s from his 1500m lifetime best set indoors in February last year. “I spent the last four weeks chasing it (the world championship entry standard), so to have done it in the fourth of four races (in the US) … I left it until the last minute. I’m over the moon to get it.”

Tanner sat in behind Britain’s Neil Gourley, who had beaten him in his last two races, until the final straight, launching his challenge perfectly to snatch the victory.

Tanner’s next event will be the 1500m at the Oceania championships in Mackay, Queensland, from June 7-11.

The third Diamond League meet of the year was not so successful for former shot put world champion Tom Walsh who once again had to settle for third behind the crack American pairing of world record-holder Ryan Crouser and Joe Kovacs.

The New Zealander sent out a season’s best of 21.96 metres in his second round, but was no match for double Olympic champion Crouser, who had a world-leading 23.02m, and Kovacs (22.49m). It was the same finishing order as the last two Games finals and the 2019 world champs in Doha.

Geordie Beamish, the third Kiwi in action at the Eugene meet, finished ninth in the 5000m in an outdoor PB of 13:29.88. He has been selected in the event for both the worlds and Commonwealth Games.