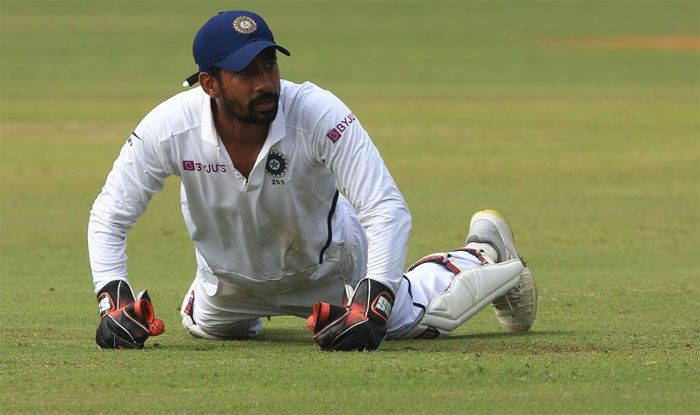 Kanpur: India wicketkeeper Wriddhiman Saha had to walk off the field, on the morning of the third day of the first Test against New Zealand at Green Park here, after he complained about stiffness in his neck.Also Read – What Motivated Shreyas Iyer to Get His Maiden Test Ton? Coach Pravin Amre Reveals

The Board of Control for Cricket in India (BCCI) said its medical team was monitoring Saha’s progress and that KS Bharat would be keeping wickets in his absence. Also Read – Flying to London? Travellers From These 6 Countries BANNED After New Covid Variant Detected in South Africa | Details Here

A statement issued by the BCCI said, “Wriddhiman Saha has stiffness in his neck. The BCCI medical team is treating him and monitoring his progress. KS Bharat will be keeping wickets in his absence.” Also Read – Pat Cummins Becomes Australia’s 47th Test Captain, Smith to be His Deputy

This can be a major blow to the hosts as the ball is keeping low and New Zealand batters are not able to control their shots. An experienced keeper like Saha would have worked wonders if he would have continued to keep. It is no hidden fact that Saha is one of the most profilic keepers in world cricket facing tough competition from emerging keepers like Rishab Pant and KS Bharat.

There has been no official statement till now about Saha returning to keep wickets in the match or not. Saha has made one run in India’s first innings before he was caught by wicketkeeper Blundell off the bowling of Tim Southee.

Earlier on Friday, Shreyas Iyer had struck a hundred on debut to prop up India but a five-wicket haul by Tim Southee followed by half-centuries by openers Will Young and Tom Latham helped New Zealand sit on top at the end of day two.

After India were bowled out for 345, New Zealand are 184/1 in 76 overs, trailing the hosts by 161 runs. After Will Young departed for a well made 89, Kane Williamson and Tom Latham are in the middle.