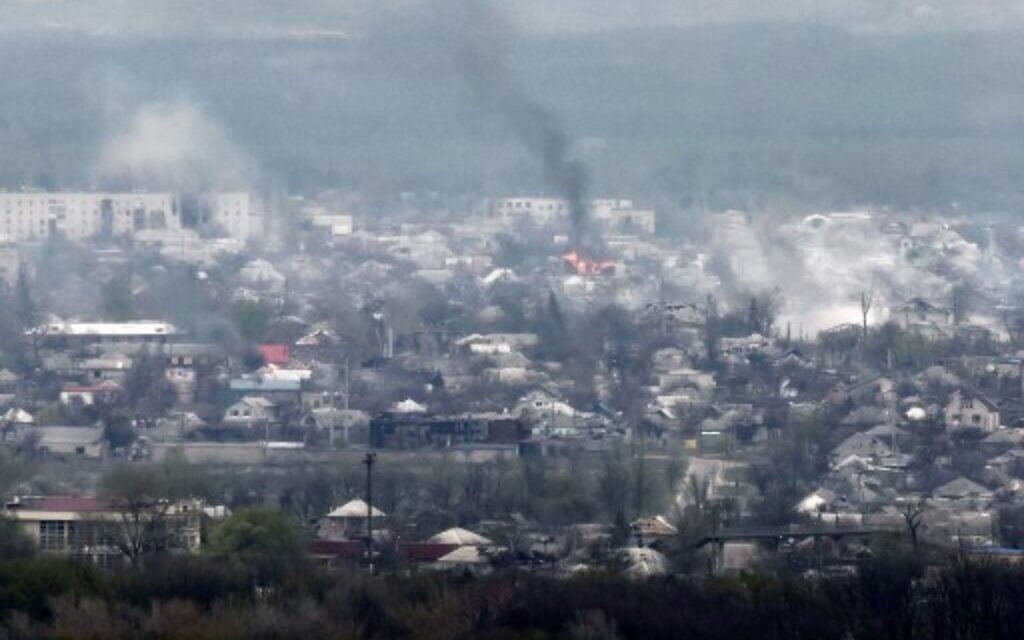 NOVODRUZHESK, Ukraine (AFP) — The capture of the city of Kreminna may have heralded the start of a widely anticipated major Russian offensive in Ukraine’s eastern Donbas region as fierce fighting raged in neighbouring Rubizhne.

Moscow has decided to refocus its efforts on eastern Ukraine after withdrawing troops from the region around the capital Kyiv, creating a new epicentre in the conflict.

The Donets river skirts Kreminna and snakes through nearby Rubizhne, Severodonetsk and Lysychansk, which have withstood heavy shelling from both sides for several days on the frontline.

Rubizhne, which had more than 60,000 residents before the war began, came under intense Ukrainian artillery and mortar fire on Monday, AFP journalists saw.

Ukrainian positions bombarded the settlement, particularly from the nearby village of Novodruzhesk.

Powerful explosions giving off plumes of white and black smoke could be seen and heard hitting Rubizhne from a slag heap near the former mining city.

People wait the bus to flee from the city of Kramatorsk, Ukraine, which has been under attack in the last days, Friday, April 15, 2022. (AP Photo/Petros Giannakouris)

“We can now confirm that Russian troops have begun the battle for the Donbas, which they have been preparing for a long time,” Ukrainian President Volodymyr Zelensky later said on Monday evening.

A small city with 18,000 inhabitants before the war, Kreminna was taken by Russian forces overnight from Sunday to Monday after three days of fighting.

Russia has now moved one step closer toward Kramatorsk, the capital of Ukrainian-controlled Donbas and a key target for Moscow.

Kreminna lies around 50 kilometres (30 miles) northeast of Kramatorsk in the Donbas, a region partly controlled by pro-Russia separatists since 2014.

“Fighting continues on the outskirts,” he added.

Four civilians were killed when Russian strikes hit their car as they tried to escape Kreminna, the Ukrainian army said.

In Novodruzhesk, former miner Victor Pasipko was perched on an electric pylon to repair a cut cable and pointed to two fresh craters.

“Look at these two craters, I think this cable was damaged by shrapnel,” the 68-year-old told AFP.

A cavernous crater had also disfigured the front garden of Nadya, 65, and her 70-year-old husband Sergiy.

People hide in a basement of a church which is used as a bomb shelter, after fleeing from nearby villages that have been attacked by the Russian army, in the town of Bashtanka, Mykolaiv district, Ukraine, on Thursday, March 31, 2022. (AP Photo/Petros Giannakouris)

A bomb struck their blue Lada on April 13. The stricken car now lies on its back on top of a pile of rubble and the shattered remains of a corrugated-iron roof.

“We are bombed everywhere. It’s a miracle that we’re still alive,” said Nadya, her voice trembling.

“We were lying on the ground and waiting. Since February 24 we’ve been sleeping in the cellar.

“There’s no more water, electricity, nothing. We’ve got no more money, no more petrol — we can’t leave.”

A little further on, a woman shows a completely destroyed cottage. A Ukrainian tank had occupied the garden to be less visible. Shortly after it had left, Russian forces struck, she said.

At the same time, a Ukrainian mortar bomb smashed into a nearby forest. A plume of white smoke appeared in Rubizhne a few seconds later, followed by the sound of an explosion.

Burned vehicles are seen at the destroyed part of the Illich Iron & Steel Works Metallurgical Plant, as smoke rises from the Metallurgical Combine Azovstal during heavy fighting, in an area controlled by Russian-backed separatist forces in Mariupol, Ukraine, Monday, April 18, 2022. (AP Photo/Alexei Alexandrov)

‘No one knows what to expect’

Around 15 kilometres to the east of Rubizhne, Russians throughout the night struck Ukrainian positions in the woods bordering the small city of Yampil.

In the morning, dozens of residents were evacuated by bus or left in their cars.

“I only slept for 15 minutes last night,” Mikhailo told AFP as he crossed the city on foot with two friends.

“There were shots from the forest. In front, behind, to the left, to the right: no one knows what to expect,” said the 27-year-old, who had his wife evacuated in the morning.

Ukrainian forces have reinforced their defences in recent days ahead of the expected Russian onslaught.

Checkpoints were fortified on the roads leading towards Kramatorsk, with concrete blocks and piles of fresh earth making chicanes harder to navigate.