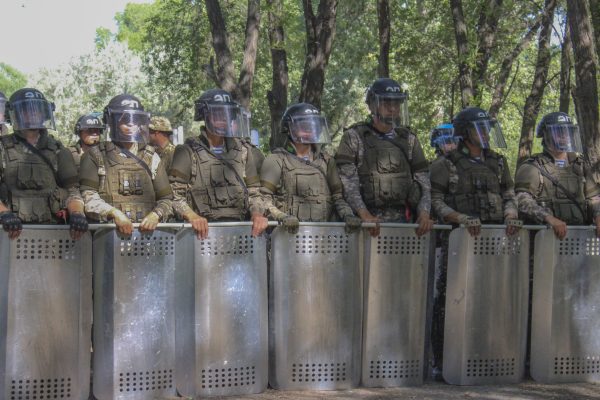 Without directly commenting, CENTOM told The Diplomat that “plans for shared military environments involving our partners in Kazakhstan are currently underway.”

A team of Kazakhstani Ground Forces soldiers stands in a riot control position during public order training as part of Steppe Eagle 19, June 20, 2019, at Chilekemer Training Area near Almaty, Kazakhstan.

In a wide-ranging interview with Russian newspaper Nezavisimaya Gazeta this week, the Russian Ambassador to Kazakhstan Alexey Borodavkin suggested that the Steppe Eagle exercise, an annual multilateral military exercise hosted by Kazakhstan with U.S., NATO, and regional forces, would “no longer fly in Kazakhstan.”

Borodavkin was answering a question regarding Russian-Kazakh allied relations and pivoted immediately to their security relationship, which he said was especially important given developments on Russia’s western border — a reference to the tense situation on the border with Ukraine. Borodavkin said Russia did not have to raise the issue of security guarantees with its southern border with Kazakhstan and dismissed the existence of any territorial issues on the Kazakh border. (That’s now how all Kazakhs see it.)

He then suggested that Kazakhstan had “conscientiously” not given permission for U.S. and British military overflights. He didn’t mention a time period, but over the course of the United States’ 20-year military engagement in Afghanistan, Kazakhstan had allowed overflight of U.S and other military aircraft, a fact mentioned in an Alabama congressman’s 2006 tribute to Kazakhstan in the U.S. House of Representatives and included in a 2010 air transit agreement. Borodavkin later noted that Kazakhstan did not agree to host U.S. military assets following the August 2021 evacuation from Afghanistan and said Kazakhstan had not succumbed to “persuasion” to host “refugees.”

Borodavkin obliquely suggested a deterioration of Kazakhstan-U.S. relations as evidenced by the cessation of the Steppe Eagle exercise under Kazakhstani President Kassym-Jomart Tokayev. His statement is misleading, at best.

Since 2006, under NATO’s Partnership for Peace program, Kazakhstan has hosted the Steppe Eagle military exercise annually in cooperation with NATO and regional partners. The exercises are sponsored by the U.S. Joint Chiefs of Staff and carried out by U.S. Central Command and the Arizona National Guard, along with other NATO partners and participation of regional militaries, too. The exercise was last held in June 2019, days after Tokayev was elected president (he had become interim president when Nursultan Nazarbayev resigned in March 2019).

Borodavkin went on to say that “we are now witnessing how far from peacefulness toward Russia and consequently, its allies” the U.S. and NATO position is. Without directly naming Ukraine, the ambassador was clearly referring to the situation in Ukraine. In recent weeks, the United States has sounded increasingly urgent alarms regarding a Russian military build-up on the border of Ukraine, warning of an imminent invasion.

The implication, it seems, is that the Steppe Eagle exercises have been canceled for political reasons or due to unease on the part of Kazakhstan regarding the United States. “So, as far as I know, the Steppe Eagle will no longer fly in Kazakhstan,” Borodavkin said, adding immediately that Russia and “our Kazakh friends” would strengthen and improve the Collective Security Treaty Organization (CSTO), which intervened in a member state for the first time in January, when summoned by Tokayev for support. Despite Tokayev’s claim of facing 20,000 foreign trained “terrorists” as the rationale for needing its support, the CSTO mission lasted just two weeks and fired no shots.

Of course, there’s a more obvious reason that the Steppe Eagle exercises have not been held since the summer of 2019: the COVID-19 pandemic.

While CENTCOM would not comment “on the positions and planning of foreign dignitaries,” in response to a query from The Diplomat it did say that “plans for shared military environments involving our partners in Kazakhstan are currently underway.”

The Steppe Eagle exercises remain featured under “security cooperation” on the website of the Kazakhstan Embassy to the United States.

We’ll have to wait and see if the Steppe Eagle does indeed fly or not. There’s clear motivation for the United States to want to see the exercises resume and for Russia to press Kazakhstan to push them off.