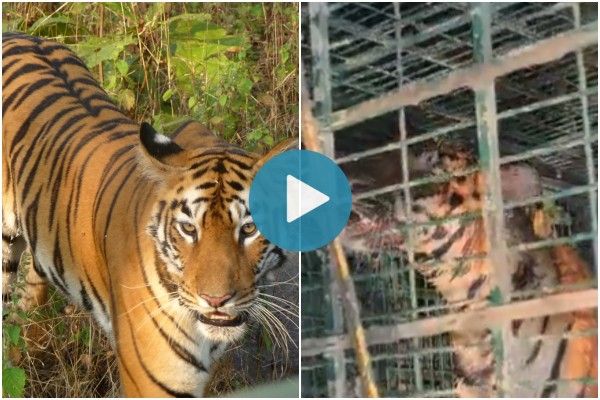 South 24 Parganas: A Royal Bengal tiger that strayed into human habitat at Kultali in West Bengal’s South 24-Parganas was finally tranquillized and captured on Tuesday. The tiger was first sighted by the villagers inside the thick bushes near a river at Garankathi hamlet of Kultali on Friday. Local residents said they had been hearing tiger roars for the last few days and pugmarks were also found in the area. Since then, panic spread in the area and efforts were on to trap the animal or tranquilise it. But the animal continued to elude the Forest officials for 6 days.Also Read – Tiger on Prowl Triggers Panic in Kerala’s Wayanad, Kills 17 Animals in 17 Days

Continuing their efforts, forest officials deployed two tranquilising teams and set two traps in the form of cages using goats as bait. Chocolate bombs and chilli-crackers were also used. The tiger was finally captured in a cage on Tuesday, bringing much-needed relief for villagers and Forest department.

Forest Minister Jyotipriya Mallick said that the tiger would be taken to a veterinary hospital for a health check-up.  The tiger’s body will be examined to see if there are any injuries, Zee News reported.

The #RoyalBengalTiger had strayed into #Kultali from the #Sunderbans forest. It was finally captured after 6 days. pic.twitter.com/Tc2u97P1fi

A man was also injured on Sunday morning after the tiger lunged at a group of people when they were looking for the big cat inside dense bushes in South 24 Parganas district. Fearing an attack, hundreds of villagers had gathered around the location, holding lathis, but forest personnel barred them from approaching the area. Officials imposed Code of Criminal Procedure (CrPC) Section 144 in the area to prevent people from gathering at the site.

The tiger sighting was the third in the area this month.