Road trains filled with desperately needed groceries have arrived in Kalgoorlie after 80 per cent of Western Australia’s supermarket suppliers have been cut off from the state.

The state government has said it expects it to be a fortnight before the rail links are fully-functioning again.

In the meantime, a landbridge solution is being implemented.

Around 123 containers including meat, dairy and frozen goods have been stacked onto a seven kilometre-long train, with triple road trains sent from South Australia to meet it.

Trucking company Linfox is also dispatching double road trains to Perth, which are being loaded in Adelaide.

Linfox is planning to send hundreds of trucks in convoy to Western Australia in the coming weeks.

“It’s not enough — we know that, but it’s better than nothing and it’s what we can do while we work to permanently restore the rail line,” Mr Scurrah said.

Drone footage of the Nullarbor shows the extent of damage done to the rail line during last week’s floods.

A crew of 100 people and 25 heavy machines are working around the clock on repairs, and they’re scheduled to finish by February 17.

Coles and Woolworths have imposed buying limits on a range of products, including flour, sugar, pasta and frozen goods.

The buying limits are not just in response to the reduced supply, but also an attempt to control panic buying.

“The loss of the key freight link from the east will regrettably have an impact on product availability in our stores over the next little while,” Woolworths General Manager for Western Australia Karl Weber said.

“We’ve placed temporary purchase limits on selected categories to help ensure more customers have access to essential products while we work through the disruption.”

But not everything is set for shortages. 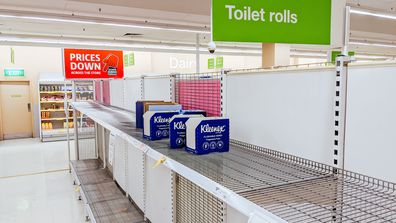 Victorians turn to panic buying as fourth lockdown sets in

“More than 80 percent of our fresh fruit and vegetable range is sourced from growers within Western Australia, so we expect that part of the store will hold up reasonably well,” Mr Weber said.

“We also source a large volume of our milk, dairy and meat locally.

“Together with our transport partners, we’ll continue to do everything we can to get as much stock as possible into Western Australia by road and ship.”