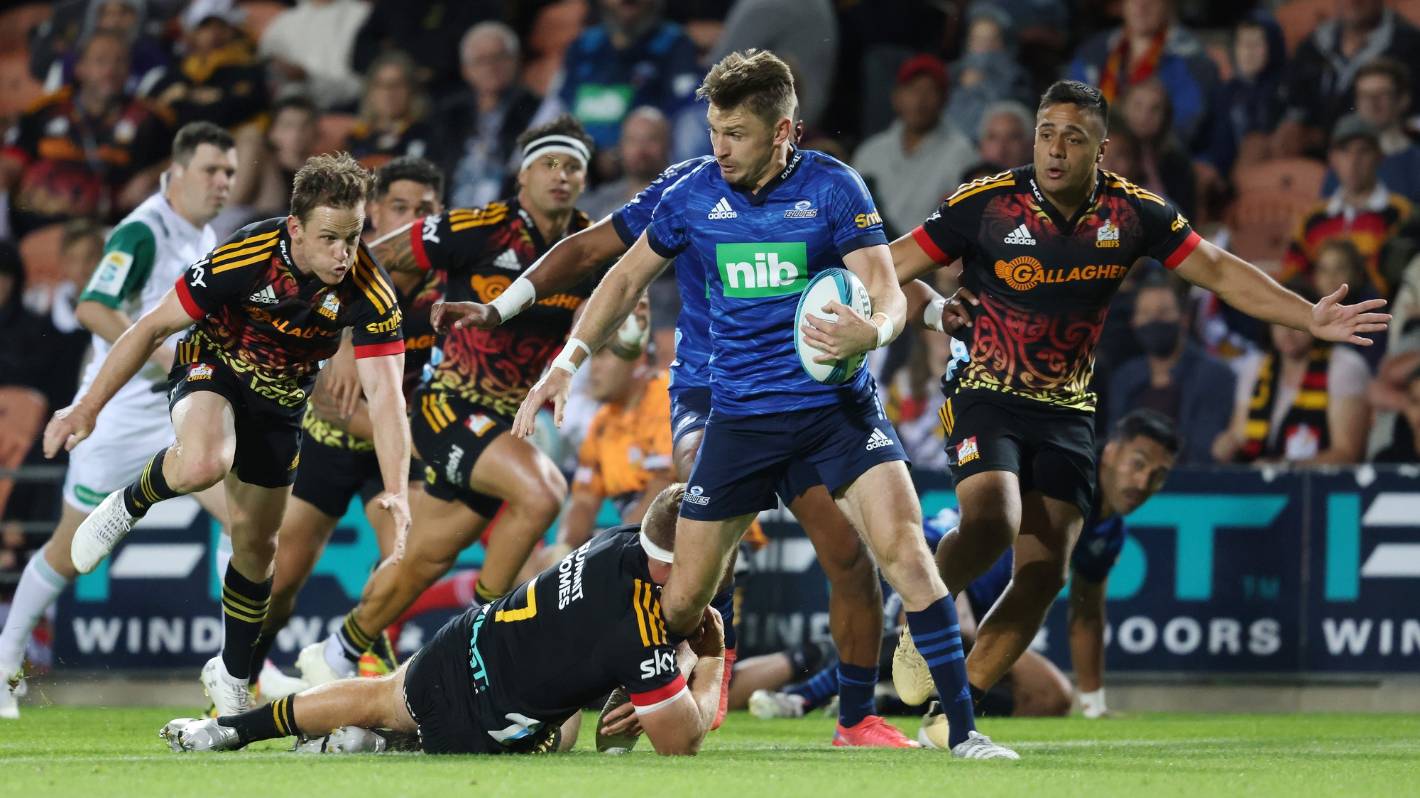 Beauden Barrett and the Blues showed plenty of grit and character to shut out the Chiefs in Hamilton on Saturday.

Classy midfielder Rieko Ioane says Saturday’s historic shutout of the Chiefs in Hamilton was a “line in the sand” for a Blues side that has quickly refocused for what is being widely tagged the game of the Super Rugby Pacific season in Christchurch on Friday.

In other words, the encouraging mixture of resilience and brilliance that underpinned the Blues’ 25-0 victory over the Chiefs – their sixth on the bounce in Super Rugby Pacific – has to be a starting point, not a finishing one, for a side very much with its eye on the big prize in 2022.

With both sides at 6-1, on 27 competition points, Friday’s fixture at Orangetheory Stadium has a pivotal feel about it, and history says it’s a forlorn mission for the Blues who have dropped their last 14 on the bounce to the Red and Blacks. The Auks haven’t beaten the Crusaders since 2014 and haven’t won in Christchurch since 2004, when Carlos Spencer weaved his magic for just their third victory in title town.

Beauden Barrett steered the Blues home as the Chiefs rued some near misses.

But the formline of 2022 gives the Blues, who have lost halfback Sam Nock to a broken hand from Saturday’s gritty victory, some hope. Leon MacDonald’s men have rattled off six straight wins since they gave up that big lead late in their opener against the Hurricanes; and the Crusaders have not exactly set the world on fire the last two rounds en route to scrambling victories over the Hurricanes (24-21) and Highlanders (17-14).

READ MORE:
* Super Rugby Pacific teams: TJ Perenara returns for Hurricanes against Moana Pasifika
* Super Rugby talking points: Was Ardie Savea right to call out referees?
* Blues revel in the backbone factor as they shut out the Chiefs in stirring style
* ‘May be in a bit of strife’: Chiefs fear the worst for injured Anton Lienert-Brown

“We were pretty good at the weekend as far as sticking to systems on both attack and defence, but it’s about replicating, if not improving, that performance,” said Ioane on Monday. “That was an awesome benchmark for us to set a line in the sand of where our team needs to be come game day.

“If we can look to improve on that – there were still a lot of things we left out there – it will put us in good stead for winning this game. That’s the challenge, putting in back-to-back performances of high quality, and is what lies ahead of us.”

There was a lot to like about a Blues performance in Hamilton that coach MacDonald tagged the best of his tenure. Their discipline wasn’t the greatest, with three yellow cards, but the visitors from up SH1 dug in and negotiated a tough period where they were down to 13 players, and absorbed a lot of pressure.

The long-standing criticism of an under-achieving Blues squad has often been around their lack of backbone, nous and grittiness when push comes to shove. But on Saturday they displayed all three in spades in what senior lock Josh Goodhue called a confidence-boosting performance.

“In the past we’ve probably doubted our ability [to defeat the Crusaders], but having a good win like that is going to be great for our confidence,” said Goodhue, highlighting defence, set-piece work and breakdown physicality as key foundations of their first shutout of the Chiefs.

“We don’t have to do anything special. If we can play well in our systems and work as a team, as a pack, we’ll get the job done.”

Goodhue wasn’t sure if he’ll get to line up against his brother Jack who played club rugby in Christchurch last weekend as he works back from a serious knee injury, but made it clear where family loyalties lay.

“We just had a family chat last night with all the siblings and everyone was backing the Blues, and had their blue colours on. He was a little bit cut, I’m not going to lie, but coming from a Northland family it’s pretty clear who everyone cheers for. He’s had the better of the games in the past but hopefully we can make that right at the weekend.”

Goodhue also had some high praise for the qualities long-time Crusader Luke Romano had brought to the Blues environment in 2022.

“He’s gold for us, just with his experience. Any situation, he’s been in it and every week he adds something new. He’s helping me with my lineout calling and how I lead the lineout, and it’s been so important for my growth. You can see it in his game – he feels re-energised up here, he feels like it’s a new challenge, and the way he’s playing for an old fella, it’s pretty impressive.”

Ioane, too, feels buoyant about Beauden Barrett’s presence at 10 (“He’s a cool cucumber under pressure”) and about the backline’s improving formline. “If we fire as a backline, I’d back us against any other backline in the competition. But it’s about building that cohesion, and our end goal is come playoff time. As long as we’re a slow burn to that then we’re pretty happy.”

The Blues’ only injury from Hamilton was the break in Nock’s hand which is expected to see him out for around three weeks, with fellow halfback Fin Christie “available” after being a late withdrawal on game night.