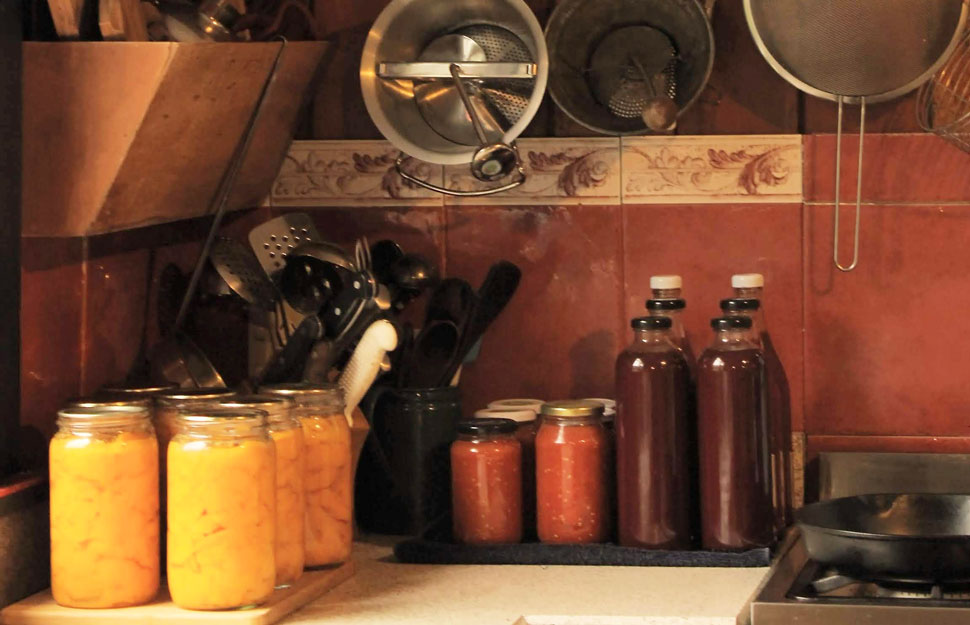 Bottling the last of the harvest is no easy task when the goal is a year’s supply of sauces, tomatoes and plum wine.

The late summer and autumn harvests are a busy time on the homestead. Tomatoes need to be dealt with as they ripen and one big pick will give us enough for a batch of tomato sauce and some extra for bottling.

Plum sauce is made to the original, simple but tasty Aunt Daisy’s recipe, or they’re stewed for crumbles and stored in 1 litre Agee jars, and there’s a little plum jam made too. Apples and peaches are also stewed and bottled in the same size jars. I figure we need about 100 1 litre jars of fruit to see us through for the year.

I see other people’s beautiful jars of sliced fruit in their sweet syrup but not us, we stew. Most of our fruit will go into crumbles or baking. As our family eats low-sugar we prefer a less juicy crumble. I only add enough water to cook the fruit so it doesn’t (usually) stick to the base of the pan. This stew method could also be because cutting nice-looking slices isn’t high on my priority list. We will often use squishy, not-so-pretty ripe fruit too.

Now that last sentence should release you from any impression I am a domestic goddess, or anything approaching one. I spend a lot of time in the kitchen, sure, but not out of a desire to create wondrous dishes in order to to awe. I make food — generally wholesome, healthy food — simply to feed us. Some might say they do this with love, but I say don’t expect any gourmet delights.’

For the past year we have been establishing new gardens and planting fruit trees, vines and berry brambles. And, at the same time, calculating how much food it will be possible for us to produce. A combination of the lockdowns, a drought and the strain of moving properties slipped us back into the habit of buying a lot of food. By thinking about what we really need and how we want to eat for our health, we are able to pull this back into line.

Summer and autumn harvests are a big part of this. They set us up for the colder months with loads of low-sugar, additive-free, preservative-free pickles, sauces, tomatoes, vegetables and fruit. One of the largest driving forces of our need to make and grow our own food is knowing how it was produced and what it contains.

On this particular day, a raining and very muggy one, David decided to forgo his outside work to help with preserving. On our bench was a pile of freshly picked heritage sweetcorn, cucumbers and tomatoes. I chopped tomatoes for sauce and got them cooking on the stove top. David stripped the corn and blanched it, before cutting off the kernels. I hauled out the pressure canner and had a quick recheck of the manual to make sure I knew what I was doing (didn’t want to blow a hole through the ceiling, after all).

All sorted, we jarred up the corn and pressure-canned it. Sounds simple, but I swear these things eat up time — by the time you fill the canner, release the steam for 10 minutes, process, then turn off and allow pressure to drop, it feels like the afternoon has disappeared.

Sure, you can be making bread-and-butter pickles and water bathing them at the same time, covering your entire stovetop with massive pots. It can get a little overwhelming, especially in muggy weather, with our child dragging balloons through the kitchen and then standing in the middle of everything. I went ahead and moulied the tomato sauce, reheated and bottled it. Then bottled the leftover tomatoes while David sorted the wine.

We make wine from the deep red ‘George Wilson’ and ‘Satsuma’ plums, then feijoas and sometimes apples later in the season. We once made berry wine and that was superb, plus a feijoa wine that somehow turned out like a liqueur. There have also been some complete duds that we suspect were infected by wild yeasts. That’s always a real bummer as this is the only wine we will have for the year (unless a bottle of birthday port materializes).

The wine barrels need warmth to brew, so they sit in the kitchen and gobble up my workspace. Our current batch was ready for the next step — straining off the plums. This is a bit of a messy mission, but strained it became. When returning the wine to two 25-litre brew barrels, added sugar, extra water, yeast and yeast nutrient. The yeast packet said it would make 20-litres so I added extra yeast to the barrel. Only time will tell if that was a terrible idea.

It didn’t take long for one barrel to start fizzing. Pink foam began bubbling from its air-lock, forcing its way out from the lid. We took off the lid, covered it with a cloth and put the barrel in a massive bowl to catch any spillage. Surely there wasn’t much else we could do till it calmed down?

It was a long day, with plenty of other chores done and dusted too. I looked at the jars and bottles on the bench, and couldn’t help but sigh. Seriously? It took that much work to preserve only that? Even David, a guy who spends all day fencing, conceded physical defeat. “That was hard work, and my feet hurt,” he says.

As we rested our weary bones that night, an early wake-up call was brewing. BANG! The explosion wrenched me from my sleep. I stumbled into the kitchen and a great pink frothy mess greeted me.

The second barrel had exploded, its bung flying in one direction and its lid in another. Foam was everywhere and still oozing from both barrels, which now resembled a flow of pink lava. We cleaned up the mess and tried to lid and bung them again, but foam kept coming.

David concocted a larger air-lock using big hoses and a bucket, and as he removed the bung to fit the larger pipe, pink fizz erupted across his face and all over the white cabinets. Oh man, I laughed. Oops. The new air-lock did end up working but I swear I’m still finding pink splatter around the kitchen. Like I said, not a domestic goddess.

In 2020, Rebecca and David Stewart subdivided and sold their block in a tiny Manawatu village in order to create a more self-sufficient way of life. Choosing to buy 6ha (14.8 acres) of land, most of it in pines in a remote corner of King Country, meant no mortgage and treasured financial independence. The distance doesn’t stop Rebecca from running the increasingly popular Homesteading New Zealand group on Facebook. She also posts regular updates on their farm’s transformation to its own page, Fodder Farm. Read more about their journey here, and visit thisnzlife.co.nz every month for the latest from their slice of New Zealand.