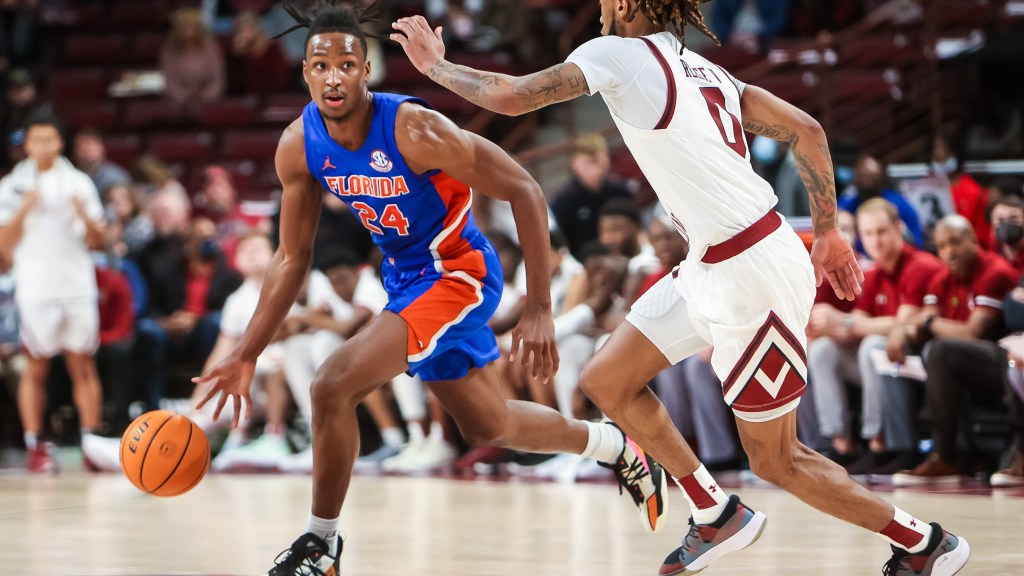 It seems hard to believe that you can type that headline on Jan. 15, but that’s the way the schedule has crumbled for this team.

It wasn’t so much that Florida played like a different team than it did during its losing streak, but the level of opposition was a lot different. And Florida hit some early shots that helped breed confidence that had evaporated after the fast start to the season.

Not that it matters. Just getting an SEC win should take some of the pressure off a team that had been dealing with a lot.

“We were 6-0, but after Oklahoma, after we experienced failure, you could see the change in body language. People were hoping the ball would go in.”

Florida had a run midway through the first half that allowed the Gators to take a 13-point lead at one point. Part of the problem in Florida’s three SEC losses was that the Gators started poorly and had to dig themselves out of holes.

The opposite was true in this one as South Carolina, now 10-6 and 1-3 in the SEC, clawed its way back to within four in the second half.

But the Gators (10-6, 1-3) made key baskets and free throws down the stretch and Colin Castleton blocked everything in sight as Florida was able to pull away.

Castleton finished eight blocks and Florida had 11 total for the game.

Chico Carter scored 12 points in only 15 minutes and was the leader for the Gamecocks with a plus-6 in the +/- differential. Only two other Gamecocks were in the plus category.

Freshman Kowacie Reeves got his second start and showed some real poise for a young man. He scored 14 points on 4-for-6 shooting including a pair of threes. He also made 4 of 5 free throws and had a key rebound late, saving the ball into teammates as it was heading out of bounds.

Florida shot a season-best 55% in the game in part because the Gators were able to shoot 74% inside the paint. South Carolina shot 35%.

The Gators trailed for only 17 seconds of the game and won at Columbia, South Carolina, for their first SEC win of the season.

“We wanted to create the same aura we had when we were 6-0 and not worry about getting shots. We were trying to get back to being ourselves.” — Kowacie Reeves.

The Gators return home to face Mississippi State Wednesday at 6:30 p.m. The Bulldogs played Saturday night at 6 against Alabama and are 11-4 this season, 2-1 in the conference. They beat Florida in Starkville, Mississippi, last year, 72-69.