Queensland’s insistence that foreign arrivals quarantine for twice as long as COVID-infected locals is a “contradiction” that fails to take the “bigger picture into account”, according to a prominent British public health physician.

Asked whether there was any possible public health justification for the policy, Professor Iain Buchan said it was a “contradiction in terms”.

“If a negative person has a longer quarantine period than a known case and their probability of transmission is not going to be greater,” the dean of the Institute of Population Health at the University of Liverpool told nine.com.au.

“So your risk management there is not taking the bigger picture into account.

“The incubation period for Omicron is likely much shorter and the duration of the virus present in the body to a level of infectiousness is probably very short.”

The data scientist noted that the US had recently reduced quarantine periods to just five days and suggested Queensland rethink the regulations.

“It would be much more sensible for Australia’s quarantine policy if it wants to open itself up again to have an alternative to quarantine, which is maybe three negative lateral flow tests,” he said.

“I think people need to move with the times and look at the data and consider the impact on their economy and their social well being as well as the public health.”

Queensland plans to drop the 14-day quarantine period for international arrivals shortly, but not until 90 per cent of the state’s over-16s are fully vaccinated. The figure was 86.9 per cent on Wednesday and authorities expected the milestone to be hit some time in January.

“While both interstate and overseas hotspots are a concern, the risk profile for overseas hotspots is greater due to several factors, including quality of vaccinations, different variants circulating overseas, and uncertainty in contact tracing processes used in other countries,” a spokesperson told 9News. 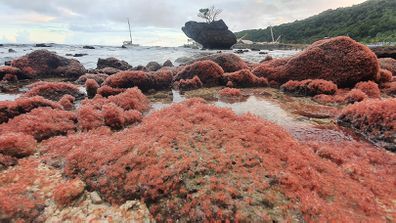 ‘Just a sea of red’: Baby crabs leave the ocean on Christmas Island

Queensland last week reduced the isolation period for COVID-19 patients and their close contacts to seven days. Close contacts must test negative on their sixth day, through either a PCR or rapid antigen test depending on their symptoms, to guarantee their release.

But the state has kept a rule forcing overseas arrivals from anywhere other than New Zealand to quarantine for 14 days at home or a government-arranged hotel, regardless of their vaccination status.

Several more Australians trying to get back to Queensland have contacted nine.com.au to express their annoyance since the contradiction was highlighted earlier this week.

They also complained about the relatively strict restrictions on where returning travellers can quarantine — apartment buildings with common access points aren’t allowed — compared to someone infected with COVID-19.