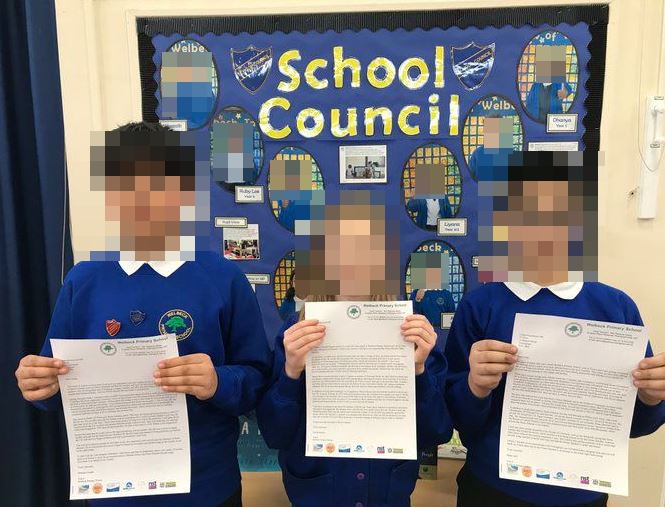 A PRIMARY school has been slammed for getting kids to write angry letters blasting Boris Johnson.

Tory MPs demanded teachers at Welbeck Primary School in Nottingham be sacked for using crucial classroom time to haul the PM over the coals.

The school tweeted pics of their Year 6 pupils writing to their local Labour MP about Partygate during lessons.

The now-deleted post said: “Year 6 pupils have written to Lillian Greenwood regarding how angry they are with the PM for the allegations he broke lockdown rules and his continued lying to Parliament.

“Their trust in politicians has been damaged.”

One letter claiming to be from a pupil no older than 10 read: “I am enraged. Infuriated. I feel lied to and that we desperately need a new leader.

“I feel that there is no reason to trust our government and as a British citizen, the Prime Minister should resign. This letter is on behalf of my country.”

Labour MP Ms Greenwood said: “I understand and share their anger and will be writing to Boris Johnson asking him to respond to my young constituents’ concerns.”

But teacher-turned-Tory MP Brendan Clarke-Smith was furious with the exercise and demanded heads roll.

He told The Sun: “This falls well below the basic standards that I would expect and I’m sure parents would also expect.

“In fact, if I had done this and then brought my school into disrepute with the subsequent tweet then I would expect to be sacked.

“Children do not exist for the purpose of furthering people’s personal political agendas and we must not put words in their mouths.”

Headteacher Rebecca Gittins, who likes lots of anti-government material on Twitter, insisted the kids chose to write the letters.

She said: “As part of a Democracy topic, the Year Six class has been looking closely at national politics, our leaders and decision-makers, while discussing fact and opinion.

“There is no ‘teaching’ of politics. We explain processes and structure, with the children encouraged to express their thoughts.

“Year Six pupils watched recent coverage on Newsround about Downing Street and some of them asked to write to their local MP to share their views.

“This lesson was linked to the English curriculum where children constructed letters using their skills to form arguments, assess evidence and develop their critical thinking.

“A tweet displaying the work received five abusive responses, which was really disappointing.

“The decision was quickly taken to remove it before these were seen by the pupils.”