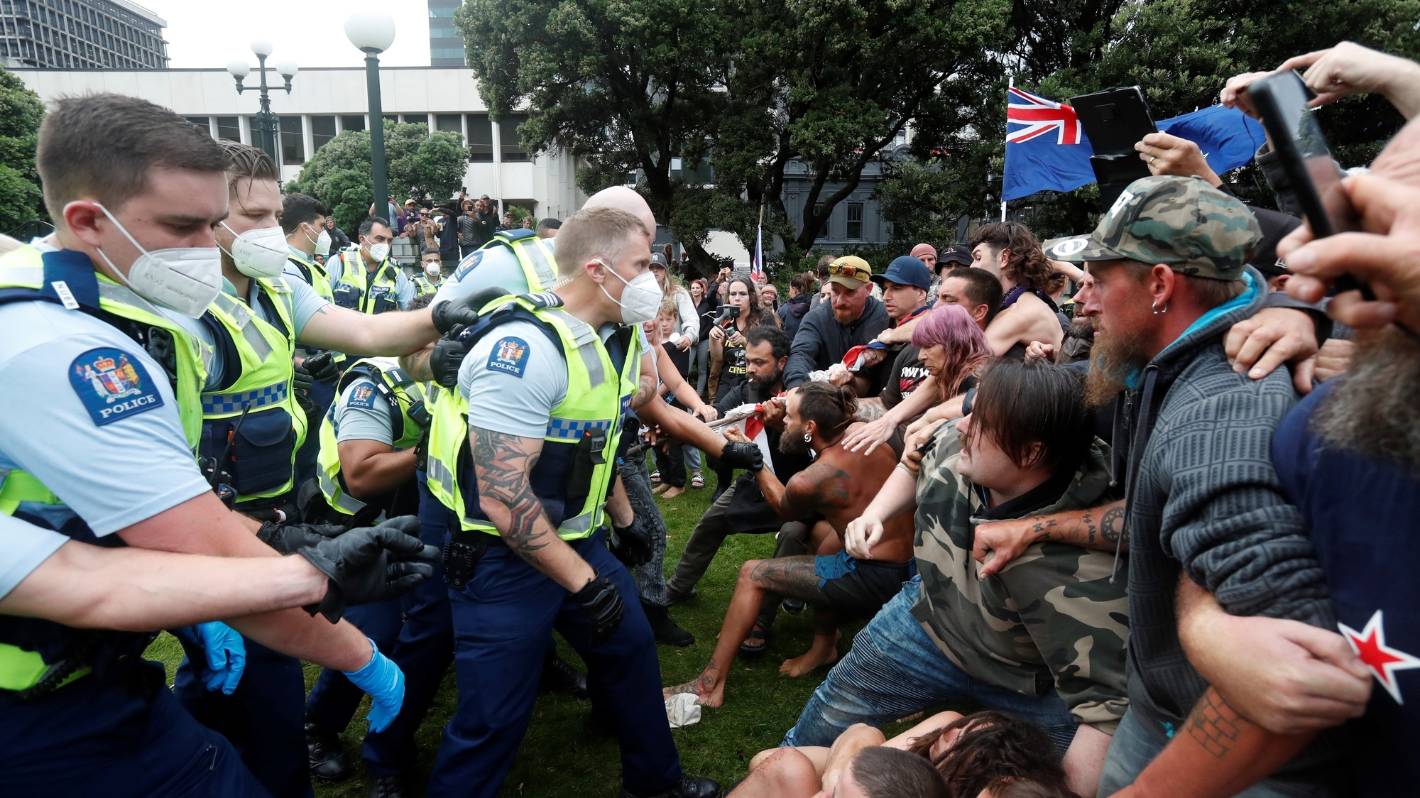 Police have arrested 122 trespassers at the “unprecedented” anti-vaccine mandate protest at Parliament as campers hunker down for a third night in the cold.

More police are being brought from around the country to Wellington to bolster the ranks of police at Parliament and enforce the trespass order. Already 150 extra staff have joined district staff.

The amount of protesters had reduced significantly, according to an emailed statement from police on Thursday night.

“This is unprecedented for New Zealand,” Wellington district commander Superintendent Corrie Parnell said in an earlier media conference on Thursday evening. “We’ve never had an occupation of the scale … It was never going to be a short process. We are conscious of that. It has to be a measured approach, and it will take some time, potentially.”

Police were working with the Wellington City Council to remove illegally parked vehicles that have been blocking streets, and were also removing tents from Parliament’s lawn.

Parnell said police started with a “measured, graduated response” but began making arrests when protesters would not leave Parliament. Attempts to engage with organisers had been hampered by confusion about who was in charge, Parnell said.

“We’ve worked hard in terms of engaging with the key organisers, trying to educate them and encourage them to peacefully desist from some of the activities … We have moved now to state of enforcement.”

Children at the protest remained a “significant risk factor”, Parnell said. At the beginning of Thursday some adult protesters were placing children at the frontline, facing police.

Parliament grounds were officially closed by Speaker Trevor Mallard early Thursday morning. As a result, any remaining protesters could now be arrested for trespass.

Those arrested would be charged with obstruction and trespass and processed in a police custody unit before being bailed and provided with a date for a court appearance. Arrested people would also be issued with a written trespass notice from Parliament.

Part of the police response involved evidence-gathering from police photographers and videographers, and via drones and CCTV footage.

Wellington City Council senior parking wardens have also started ticketing illegally parked vehicles in the area, and are being accompanied by police. At least 120 tickets had been issued by 6pm Thursday.

Police urged anyone with a vehicle blocking streets around Parliament to remove it immediately.

Because of the protesters’ volatility, staff at Parliamentary Service, Victoria University of Wellington’s law and business schools, Ministry of Education, Ministry of Justice, Department of Internal Affairs and Ministry of Health were advised to avoid the area entirely and remove identification when nearing the area.

It was time for protesters to move on, Prime Minister Jacinda Ardern said in a press conference on Thursday morning. But operational decisions were for police to make, not the Government, she said. “This is part of what they do.”

The protesters have continued to direct abuse towards members of the media, the public and businesses around the Parliamentary precinct throughout Thursday.

The crowd has consistently maintained it would stay as long as it needed to get action, even in the face of a days-long forecast for rain in Wellington.

A number of roads around the area remained blocked, and police urged commuters to plan their travel accordingly.

Also on Thursday, a smaller protest outside Picton Police Station was formed, but later dispersed.

In Christchurch, police arrested and charged the driver of a vehicle associated with a protest group outside Christchurch Central Police Station.