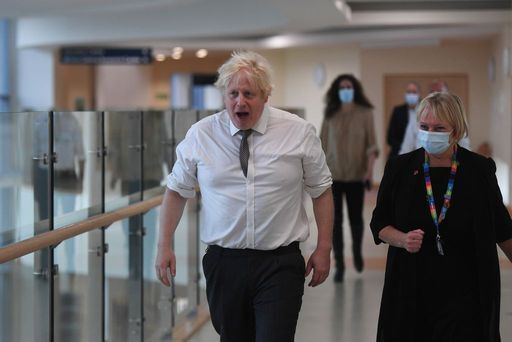 Mr Johnson is visiting a hospital in Northumberland ahead of today’s debate. However when asked by Sky News why he could not jet back to London for the debate with the RAF—as he commonly does—he refused to answer.

He explained that he hoped the Speaker would attempt a cross-party consensus on a way to proceed on the issue of standards reform, “including an appeals process for very difficult and very sad cases, such as the one we’ve seen”.

Deputy Labour leader Angela Rayner has accused the PM of “running away from debate & scrutiny” in light of the news.

The Commons debate on MP standards has been moved back to around 4:15pm by a statement from health secretary Sajid Javid will on a man who last week confessed to two murders and serial sex abuse of corpses in Kent.

Commons’ Speaker Lindsay Hoyle will read a statement ahead of the debate. A statement from his office earleir today read: “Last week did not show our democracy in the best light. I hope today’s debate will give members the chance to express their views and help us move forward. I also hope MPs will consider their language to get the right message across.”

It has been suggested that the proposed shake up of the rules regarding MPs standards could include a crackdown on those earning thousands from outside interests, and the right of MPs to appeal to a judge should the commissioner find them guilty of a standards breach.

The Liberal Democrats, who secured the debate, are also calling for a public inquiry into the sleaze allegations aimed at the government.

MPs voted 250 to 232 last Wednesday to prevent the 30-day suspension of the former Conservative minister.

The government also whipped in favour of an amendment tabled yesterday by Dame Andrea Leadsom, recommending that “the current standards system should give Members of Parliament the same or similar rights as apply to those subject to investigations of alleged misconduct in other workplaces and professions”, which would entail the “right of representation, examination of witness and appeal”.

However on Thursday the government backtracked on these proposals, claiming that it did not have enough cross-party consensus for its standards overhaul, and vowed to soon hold another vote on the matter of Paterson’s suspension.

This followed a major backlash from backbench MPs on the vote, and widespread allegations of sleaze. 13 Conservatives voted against the motion and 60 abstained, including former prime minister Theresa May.

Later that day Owen Paterson announced that he would resign as an MP, a process made formal on Friday.