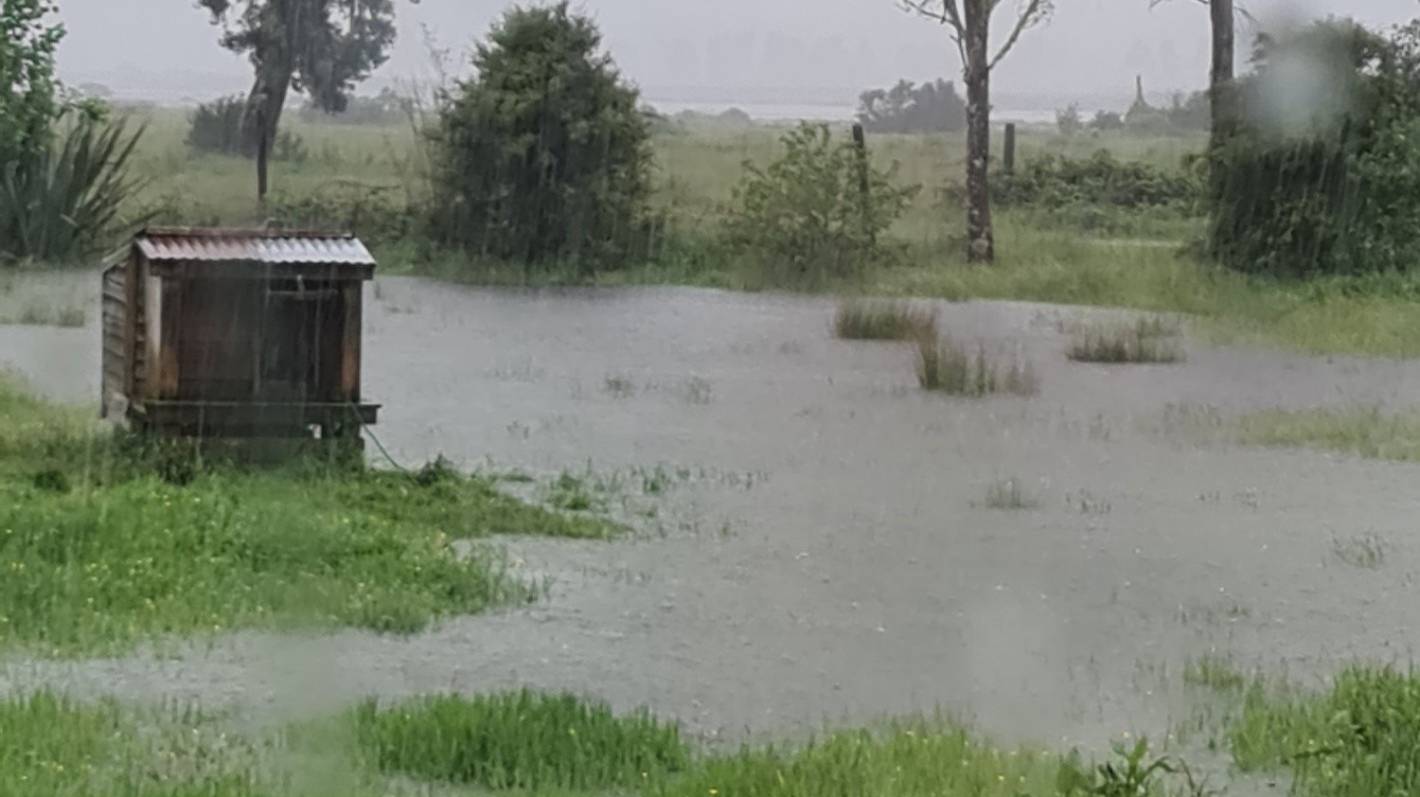 Surface flooding at Pukekura, south of Ross, after a day of solid rain on the West Coast.

Civil Defence emergency management group control centres were set up in Hokitika and Greymouth on Saturday to monitor and respond to the heavy rain and possible flooding.

“The teams are keeping a close eye on the weather and so far no serious issues have been reported,” centre controller Al Lawn said in a statement.

Phone and internet access were restored just before 9.30pm to a swathe of coastal Buller after a large scale outage affecting landlines, broadband and mobile phones left some 3000 homes incommunicado around 3:20pm Saturday.

Spokesperson for lines company Chorus, Steve Pettigrew, said the outage was caused by a fault with a “fibre electronics card south of Westport” which needed to be replaced.

Earlier, Pettigrew told Stuff the outage was likely due to roadworks cutting through a fibre cable.

“There’s no transmission being received at the exchange in Greymouth. When it goes dark like that it generally means someone’s cut through a cable”, he said.

Are you on the West Coast? Email your weather pics to newsroom@stuff.co.nz

After testing and repairs, Pettigrew said the fault was “partly weather related with a few other issues”.

Waka Kotahi journey manager Tresca Forrester said earlier police reports that SH6 had been closed were inaccurate, although there had been a lot of surface flooding on the highway.

Metservice heavy rain warnings, updated at 8.09pm Saturday, forecast a further 75 to 100 mm of rain to accumulate about the ranges in Westland between Otira and Bruce Bay.

A further 100 to 150 mm of rain is forecast in Westland from Otira northwards to the Tasman district.

Metservice says heavy rain could cause streams and rivers to rise rapidly, and warns surface flooding and slips are also possible and driving conditions may be hazardous.

Forrester said there was a possibility of closing SH6 overnight, which did not eventuate, but warnings remain in place for SH6 from Haast to Hokitika due to surface flooding.

She said crews will continue to monitor the situation overnight.

In a social media post on Saturday afternoon, the group said the rainfall was predicted to intensify in Buller overnight, but “so far has not been as extreme as originally forecast”.

Metservice forecaster Sonja Farmer said the rain band was predominantly over the Hokitika area as of late Saturday afternoon.

“Hokitika has certainly had the heaviest rainfall in the last hour [between five and six pm], though not overall. They’ve had 63 millilitres since midnight, but the heaviest falls have been further south.

“Franz Josef had 121 ml since midnight – the heaviest rainfall for them was between one and three am, when they had 45 ml.

“The river area halfway between Haast and Hokitika has had 125 ml since midnight, there’s been four or five hours of fairly heavy rain, 15 to 21 ml per hour for about five hours.

“The system is travelling slowly, bumping up against that high pressure in the north, so the rain has more time to hang around”, said Farmer.

MetService first issued the orange heavy rain warning for the entire West Coast at 9am Saturday.

It said a front will move slowly north across the South Island bringing heavy rain to western parts on Saturday and Sunday.

Flooding may occur across the region, and driving conditions could be hazardous according to the warning, which is in place until 3pm Sunday.

Correction: An earlier version of this story said State Highway 6 was closed in places, due to incorrect information being provided. Updated 7:30pm, November 27, 2021.