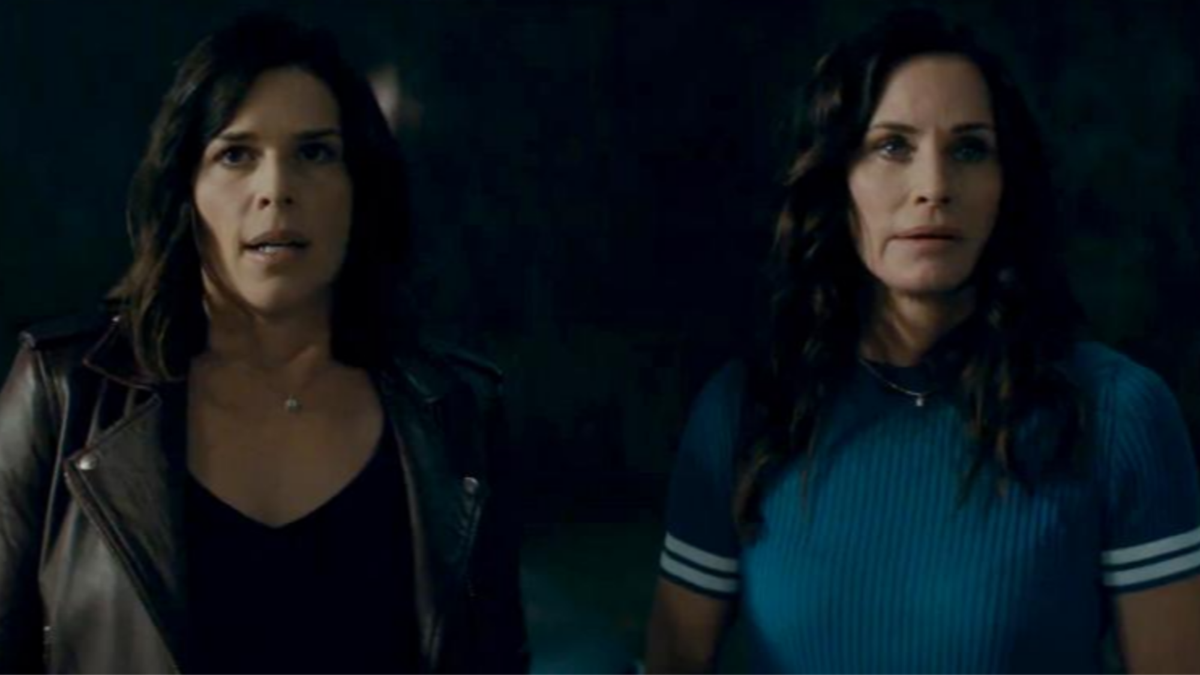 Fans of the original Scream movies were beside themselves when it was announced that a new addition to the horror favourite would hit the big screen in 2022.

But, like all sequels and prequels, there’s a sort of nervousness accompanying the excitement: Will it be any good?

In the video above, David Arquette teaches the Scream cast how to paint

Will it refer back to the previous films, or stand entirely on its own?

Well, the latest Scream film is self-referential as to risk swallowing its own tail.

But this 25-years-later “requel” (a term specifically explained in the movie) turns out to be a great deal of fun, cleverly wedding familiar faces with new stars in what isn’t exactly a remake or reboot but rather plays like a refresh.

Half the battle was won, in hindsight, during the casting, tapping Melissa Barrera (In the Heights), Jenna Ortega (Stuck in the Middle) and Jack Quaid (The Boys) for key roles among the younger contingent, while bringing back Neve Campbell, Courteney Cox and David Arquette in their original roles.

The trick comes in replicating elements of the original by the late director Wes Craven, to whom the movie’s dedicated, and writer Kevin Williamson – a horror flick that actually runs down the rules for surviving a horror flick, then watches the characters break them anyway – updating that by overlaying the new on the old.

All that’s achieved, fairly impressively, while simultaneously lampooning the original, its three sequels and that 25-year relationship with the audience.

But the new Scream still treats the series with a level of every-detail-counts earnestness generally reserved for movies with superheroes or spaceships.

Plus, there are plenty of references to recent horror movies, their varying levels of ambition and where Scream fits in.

It spoils nothing to say the basic template remains intact, with an incident involving Ortega’s character bringing her older sister (Barrera) back to the town of Woodsboro, accompanied by her boyfriend (Quaid).

An earlier killing spree there prompted a series of movies, meaning this Ghostface killer is tapping into that mythology, leaving no shortage of suspects or bodies.

The newbies get the bright idea of seeking out advice from old pros, which is where Arquette, Cox and Campbell come into the picture, however grudgingly.

Directors Matt Bettinelli-Olpin and Tyler Gillett deliver the requisite gore by the bucket.

They never let an open door, closet refrigerator, you name it – go unexploited in terms of trying to milk a jump or scare out of it.

As noted, venerable horror franchises like Halloween have managed to lure people to cinemas during this challenging time, bucking the overall trend.

That might not rate high in the rules for surviving a pandemic.

But it bodes pretty well for Scream proving successful enough to rise again, whether that’s a sequel, remake, reboot, or as in this case, all of the above.

Scream 5 is in cinemas now.