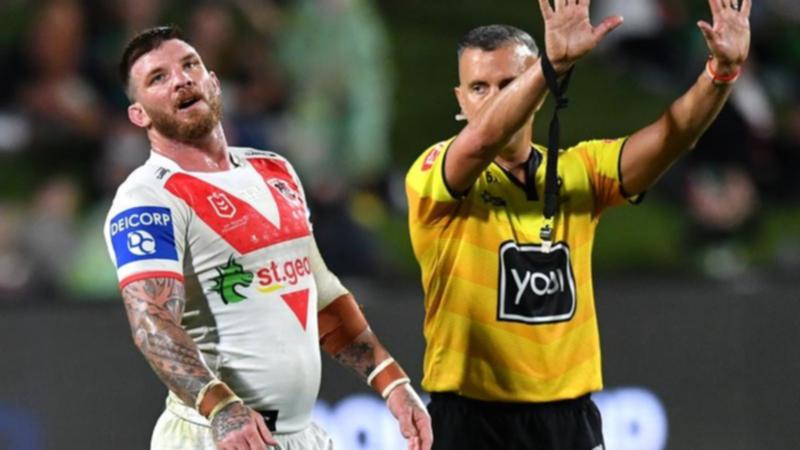 Josh McGuire admits he needs to clean up his game or risk being banned from the NRL for good as he prepares to make his return for St George Illawarra.

McGuire will play his first match of the season for the Dragons on Sunday against Newcastle, after being suspended for the opening five rounds over two high-tackle charges in 2021.

The former Queensland State of Origin prop was handed 10 games in bans last season for five separate offences, adding to five other charges over the previous two years.

It meant no one was more relieved than McGuire when the NRL changed their rules on the eve of the season, wiping away previous charges in future calculations and giving him a clean slate.

But still, he knows something needs to change.

McGuire is off contract at the end of this year and is desperate to strike the balance between his natural aggression and spending more time on the sidelines.

“(Last year) I just mistimed tackles that when you’re trying to be aggressive, you’ve got a split second to readjust,” McGuire said.

“But the rules are you can’t touch anyone high.

“I’ve got to learn and everybody in the NRL has to learn that’s the way it is.

“The game has changed from when I first started playing. It’s for the betterment of the players and that’s what the NRL want to do.

“So if I want to keep playing NRL and doing what I love, I’ve got to change and I know that.”

McGuire said he had worked on defending under fatigue during the longest pre-season of his career in a bid to avoid tackles going wrong in matches.

“There’s a fine line when you’re trying to play aggressive football, but I can’t step over that line and let my teammates down,” he said.

“I’ve probably been guilty of going across the line, but I’ve never wanted to fall below the line. So it’s a fine line.

“That’s something that I’ve always prided myself on – trying to bring aggression and and being aggressive for a team.

“But I’ve paid the penalty too many times and it’s costing my club.”

McGuire’s indiscretions have hit the Dragons hard this year as they slumped to 1-4 without him and left coach Anthony Griffin under pressure.

Under the NRL’s new rules, McGuire will have the same initial punishment as any other player for a high tackle, compared to a 190 per cent loading he would have previously attracted for a high tackle.

“Obviously you can just play play your normal game of footy and something little is not going to end up being five weeks,” McGuire said.

“You haven’t got something hanging over your head.”