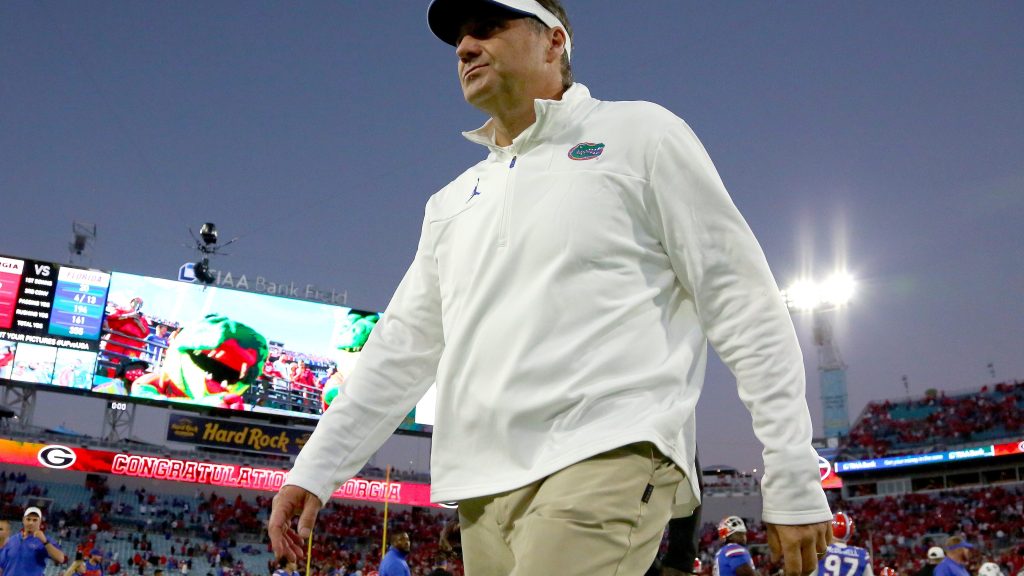 It’s that time of year again, folks! Florida coach Dan Mullen (no doubt with the help of sports agent titan Jimmy Sexton, who represents him) is once again teasing rumors that he could be looking to jump ship from college and head to the NFL.

In past years, these conversations have stemmed from non-denials and cryptic responses to questions attempting to gauge Mullen’s interest in coaching at the highest level. This time around, the fire is being stoked by two-time failed PAC-12 coach Rick Neuheisel, who said on Sirius XM radio that Mullen is getting “tired” of coaching at Florida and would take an NFL job if given the chance.

Rick Neuheisel on @SXMCollege about Florida’s Dan Mullen: “I know Dan & like him & respect him: if he gets an NFL chance I think he’ll take it. I think he’s tired of this (at Florida)”

Now, let’s be clear: This could absolutely be true. In fact, I’m fairly inclined to believe it. Mullen’s tone over the course of the last two seasons has shifted tremendously from when he was hired in December 2017. He appears despondent at press conferences, he’s making excuses and ultimately, listening to Mullen speak now is a far cry from when he invited members of the media up to the podium to thumb wrestle saying that he would “kick their ass.”

That level of competitive spirit is gone now. Sure, Mullen may try to replicate it here and there. He certainly wants to convince you that he’s a competitor. But hearing Mullen enunciate his desire to win over and over again while defending his own decision-making and pointing to the fact that UF has outgained all of its opponents despite sitting at .500, you start to get the impression that the multi-millionaire head coach doth protest too much.

It’s beyond clear that Mullen’s honeymoon phase is over, and after going 8-4 with a historic offense in 2020 and sitting at just 2-7 in his last nine Power Five games, the coach is quickly running out of goodwill with the fanbase.

He struggles in recruiting, the lifeblood of college football, and it completely stands to reason that Mullen would be interested in a highly paid coaching job that didn’t require him to spend the bulk of his time (both in and out of season) catering to the whims of teenagers. If Mullen were offered an NFL head coaching job, I have little doubt that he’d leave.

But as I sarcastically noted on Twitter yesterday, I would very much like a part-time writing opportunity that would pay me six figures. Guess what? That isn’t going to happen. And neither is an NFL team making Mullen its head coach.

Mullen’s abrasive personality has certainly rubbed some Florida fans the wrong way, especially as the team continues to regress and he neglected to make the changes many felt were necessary this past offseason, namely replacing one of the most polarizing defensive coordinators in the sport in Todd Grantham. But this is nothing new for him.

Ask anyone familiar with his tenure at Mississippi State, and they’ll recount similar stories, such as the time Mullen nearly stormed out of a press conference when asked about the injury status of a couple of players. Mullen claimed university policy prevented him from discussing injuries, but that hadn’t stopped him from doing so at MSU in the past.

Mullen is a unique personality in college football, which is probably sugar-coating things a bit. He likes to do things his way, and he wants to dictate the terms of any conversation.

A perfect example of this came during Mullen’s press conference on Monday. He was asked by Gators Breakdown’s David Waters about the recruiting strategy and if anything needed to change (for context, during the bye week leading up to the Georgia game, Mullen lost two of his three highest-rated recruits, both of which were top 100 players and, to make matters worse, are now considered UGA leans).

You could see an immediate look of disdain on Mullen’s face when he heard the word “recruiting,” and he responded about how you’d expect him to.

Mullen’s lack of interest in discussing one of the most crucial aspects of his job is certainly telling, especially after Georgia coach Kirby Smart’s poignant comments about the importance of recruiting after his team’s win on Saturday. It highlighted a major contrast between the two coaches, who seem to have their programs trending in opposite directions at the moment.

To make matters worse, Mullen then canceled all coordinator and player availabilities for the rest of the week. Because that’s a good look.

This long-winded explanation of Mullen’s shortcomings isn’t some weird attempt at character assassination. Rather, it’s an explanation why, if I were an NFL general manager, I wouldn’t touch Mullen with a 30-foot pole.

Mullen has never coached in the pros at any point in his entire career. His former boss and mentor (though Mullen himself shied away from describing the relationship as such this week) Urban Meyer is attempting to make that exact transition now, albeit with a two-year coaching sabbatical in-between.

As someone who covers the Jacksonville Jaguars, I can tell you that the experiment is not going swimmingly. Meyer has made questionable personnel, roster and personal decisions during his time as head coach. While everyone wants to focus on the bar video, that whole ordeal was more of a symptom of the fact that Meyer was not and is not prepared for the challenge of coaching at the NFL level.

And based on the way Mullen approaches his job currently, I have a hard time believing he’s prepared for that challenge, either. If he can’t handle a straightforward question about one of the most important aspects of his job without restricting access, he’ll be eaten alive by an NFL media that, in general, treats coaches in a much less hallowed manner.

Mullen is a good offensive mind, and the way he’s been able to tweak Florida’s offense year after year to fit the personnel has been impressive to watch. If Mullen were interested in being an NFL offensive coordinator, I think that’s a door that is still very much open.

But Mullen, who makes more than $7.5 million and was recently given a three-year extension, isn’t going to take a demotion. When Neuheisel says that Mullen would leave for the NFL, I don’t think he means as an assistant.

If you disagree with me, you’re probably thinking something along the lines of “What are you talking about? Kliff Kingsbury got fired at Texas Tech and somehow segued that into a job with the Arizona Cardinals.” And you would be correct. But there is a difference.

Kingsbury was considered a young, up-and-coming offensive mind. While Mullen gets credit for his bona fides as an offensive coach, nothing he’s doing is particularly innovative. But more than anything, Kingsbury is (from all accounts) not a difficult coach to work with. The same cannot be said for Mullen, and there may be a reason he has made very few voluntary staff changes dating back to his time at Mississippi State: the list of coaches who can work with him well is limited. He brought almost all of his assistants with him to Florida and barring a few minor changes, that staff remains largely intact, for better or worse.

The bottom line is this: Mullen does not have the temperament nor the track record to get an NFL head coaching job. I think he did have real momentum in that regard earlier in his Florida tenure, and if the positive trajectory had kept up, it could be a real possibility in spite of everything I’ve mentioned above.

But the Gators are regressing. It’s Year 4, and the absolute best the team can hope for is an 8-4 regular-season finish. And when you strip away the veneer of the coach who immediately made Florida competitive again, especially on offense, you’re left with an underachieving coach who, based on all the reporting I’ve seen, routinely rubs people the wrong way and is arguably loyal to his staff to a fault.

Unless you have a desire to see a repeat of what has happened with Meyer in Jacksonville, you have no business putting Mullen in charge of your NFL team.

And for Florida fans hopeful that the coach who many are starting to give up on will voluntarily walk away from his lengthy contract off into the sun toward the NFL, I have some bad news: If the Gators are going to get rid of Mullen, they’re going to have to fire him. Because no NFL teams are going to come knocking. Not anymore.