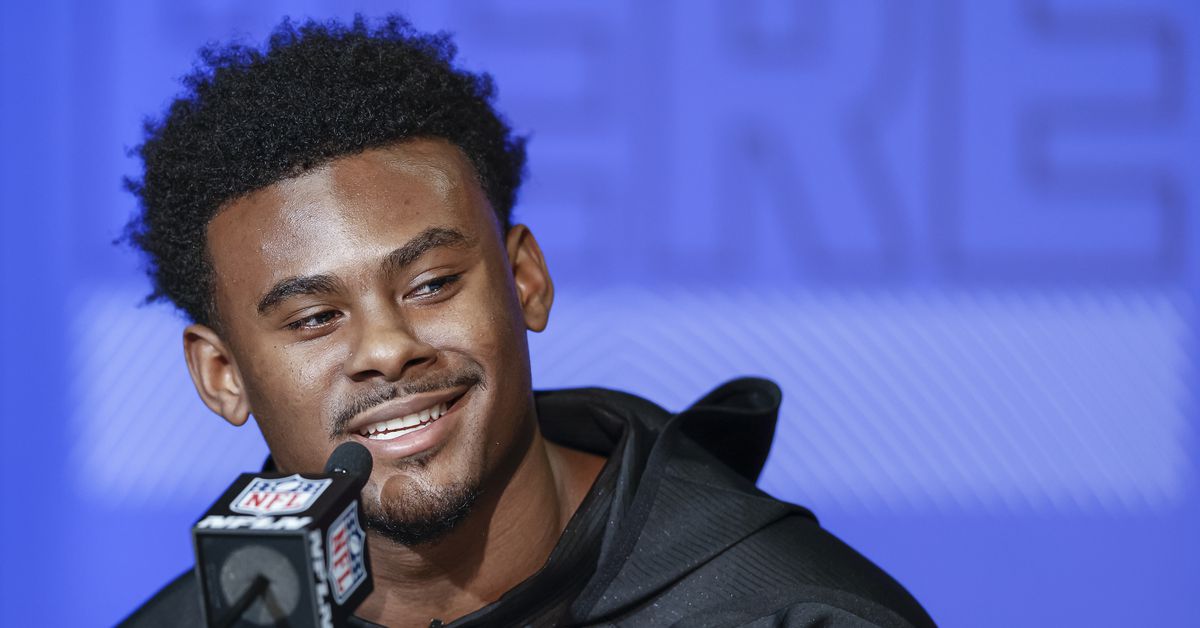 There’s been some huge changes to the NFL Draft since my last mock following the combine. Trades around the league have completely re-shaped the first round. Between quarterbacks switching teams and WRs Davante Adams and Tyreek Hill being moved due to salary concerns, a lot of team needs have flipped on their heads.

This pick is really still up in the air, and I think the Jaguars could go in a lot of different directions — but when the dust settles they take the safest, best player available. Hutchinson is going to be a force at the next level and help bolster Doug Pederson’s defense.

After agonizing over this pick, and with Hutchinson off the board, it’s time for the Lions to make a splash. There are a lot of great players available, but ultimately when you’re picking second you need a home run, and Willis could be that guy.

Detroit are already a team trending upwards. You can make a strong case for them playing this safe, going defense, and finding their franchise QB later — but the counterpoint is that if they improve in 2022 they’ll be frozen out of finding a top passer in a year. If Willis lives up to his potential it would be the defining pick to catapult this team back into the playoffs. I believe in him.

Hamilton has been sliding down boards recently, but I still think he’s an incredible talent that fits a lot of what the Texans are looking for on defense. There’s a chance they could play this with a little more risk, but I think they look to stabilize and add talent at multiple positions with the picks acquired in the Deshaun Watson trade.

Thibodeaux is a really polarizing player. People either think he’s going to dominate the NFL and immediately become a 15 sack player, or flame out and be a bust. In the end I think the promise and potential is too great to pass up for the Jets, who have been lacking a signature pass rusher for far too long.

With three of the first four players being selected on defense, the Giants are thrilled to land the best plug-and-play offensive tackle in the draft. Ekwonu is a force at either tackle spot, and if Daniel Jones can’t thrive with the protection he offers, he never will.

There’s a chance the Panthers do something dumb here, but in the end I think they make the wise decision. Carolina’s offensive line is so bad that they’d really be pretty happy with any of the tackle options in this draft, but end up with a player who had No. 1 pick potential. Neal is still every bit that vaunted player, he’s just a little more upside that polish, which is why I have him as the second OT off the board.

This would be a killer haul for the Giants, and they would be thrilled to have the draft land this way. Gardner marries upside with production and would bolster New York’s secondary immediately. If this holds, the Giants would unquestionable “win” the first round.

I could see the Falcons going for a WR or CB here, but their pass rush needs work, and Walker is too good to pass up. Recent mocks have had him going as early as No. 1, and while I’m not quite that confident, I do think he’s a tremendous talent and being a local player will make this choice a fan favorite.

For years the Seahawks were defined by their secondary. Stingley Jr. gives them a chance to bring this back. It’s a tossup whether he’s the best corner in the draft with Gardner, but I think his style best fits Seattle.

After addressing their pass rush early, the Jets move to helping Zach Wilson. Wilson is a shifty, talented receiver who can make any QB better if he has the ball in his hands. Jets fans will hope this union is good enough that Wilson-to-Wilson becomes a thing.

Cross is an excellent offensive tackle who will give the Commanders the best chance to win in 2022. I don’t think this Carson Wentz experiment will work, but this isn’t a place to reach for a QB. They’ll let this play out for a year or so, and then hope to find a real passer for the long term.

Instead of reaching for a defensive back, I have Minnesota taking upside defensive tackle Jordan Davis. I really like Davis’ pass rushing ability from the interior, and his ability to put quarterbacks in the dirt. This helps form a really nasty front for the Vikings and build this teams identity around the trenches.

Johnson has been a late-riser in mocks, but teams love his motor and drive. The ACC defensive player of the year, Johnson has ever bit the potential to be a player like Carolina’s Brian Burns, who has become a force in the NFL out of FSU. At No. 13 that’s great value.

This has been my go-to pick for the Ravens, and nothing is changing. It’s a hand-meets-glove pick that isn’t sexy, but Linderbaum is going to be a decade long Pro Bowl center. With more teams getting pass rushing interior linemen I think the center spot will be emphasized by teams in the future.

The Eagles moved out of some of their draft capital to secure assets. I think this was a good move considering their needs and where this team is drafting. Instead of reaching for a need, I have this team taking London. A big-bodied receiver that solidifies their attack with DeVonte Smith, it will allow the Eagles to get a complete look at Jalen Hurts before deciding if they need to go in a different direction. This isn’t an immediate need, but the value is too good to pass up.

The Saints could go for a quarterback, but that need isn’t pressing after re-signing Jameis Winston. Getting another receiver is of paramount concern to fixing this teams cap, and Olave is a great talent. He’s an ideal mix of speed and size, and was one of the most reliable receivers in Buckeyes history.

The Chargers did tremendous work building for the future, and this pick fits in that mold. Receiver isn’t this team’s biggest need, but it could be in the future and prepping for Keenan Allen’s eventual decline, or potentially even trading him for cap relief over the summer. Continuing to feed Justin Herbert is the key, and Williams is a great YAC receiver who can do that.

I love this pick for the Eagles. They need pass rush help, and Karlaftis is an end who could have gone much earlier. Trading for future picks and still landing London and Karlaftis would be an incredible haul.

After losing Terron Armstead in free agency the Saints need new talent on their offensive line. Penning is a big, “country strong” offensive tackle with a nice mean streak. I think he fits what the Saints like to do on offense and could play either tackle position.

The recent reports on the Steelers’ interest in Desmond Ridder has me convinced they’re targeting Kenny Pickett. There’s a chance Pickett could go earlier to a QB-needy team, but I see him falling to this point and being snapped up. He’ll push Mitch Trubisky for the starting job, and likely take over mid-season or in 2023.

I see a lot of players the Patriots would love going just slightly earlier. So, with J.C. Jackson lost to free agency and trading Stephon Gilmore, this team looks to help their secondary with McDuffie. He’s a very good player who could be a force in the right scheme.

This goes without saying. The Packers cannot leave this draft without several wide receivers, and the smaller, shifty Burks is my first pick for them.

Elam is a long, athletic corner, not entirely dissimilar to Patrick Peterson from the Cardinals past. With the brutality of the NFC West a good pass defense is key. I like this pick a lot, even though other mocks have Elam sliding.

Green is everything the Cowboys need on their offensive line. Dallas’ scouting department will have had plenty of time to look at Green during his time at A&M, and I think that bodes well for this pick. A strong, bruising guard, Green will help get back to the run-pass balance Dallas is looking for, and hopefully open some more holes for Ezekiel Elliot.

The only thing the Bills have been missing on offense over the past few years is a signature running back, and in this class it’s Breece Hall who has to potential to be a difference maker. An uncanny mix of speed and power, Hall is able to hit a second gear that seems impossible for a 225 pound back. Putting him in Buffalo feels just unfair.

The Titans are in a weird spot. They’re a good team, with some huge glaring issues in order to take the next step. At this point I think the smart move is to bolster the line, stay pat, and evaluate skill positions a little more before making a move. Raimann is a solid offensive tackle who will help in this aim.

I’ve had Hill to the Bucs in each of my last two mocks, and I still really like this pick for them. At the moment Tampa are so firmly in the driver’s seat of the NFC South they don’t need to work to counter the division, instead just looking forward to the playoffs. A better secondary is key, and Hill is a great cornerback who fills a need.

Yes, I have the Packers going back-to-back on receivers, because if they aren’t getting weapons, then what was the point of extending Aaron Rodgers? Dotson is the second of my one-two punch for Green Bay, and he’s the bigger possession receiver to pair with the burner in Burks.

Similar to the Packers, the Chiefs need a reset in the weapons after trading Tyreek Hill. Moore is an ultra-productive small school weapon who will thrive with Patrick Mahomes.

With that out of the way, now the Chiefs work on their defense. Wyatt was another part of the dominant Georgia defense that might go down as one of the best ever. While he’s not as highly regarded as Walker or Davis, as a space eater in the middle he’s second to none.

I could see the Bengals reaching a little for a cornerback here, but instead I have them taking the absolutely brilliant Devin Lloyd, who honestly is one of my favorite players in this class. I’m a sucker for cerebral linebackers who can quarterback a defense, and Lloyd is very much in the mold of a Bobby Wagner or Luke Kuechly.

With Detroit taking their big splash with the No. 2 pick, now I have them getting the pass rusher they need. Ebiketie is a sold 4-3 end, and I think Dan Campbell will love his feel for the game and the ability to shoot the gap to disrupt passers.