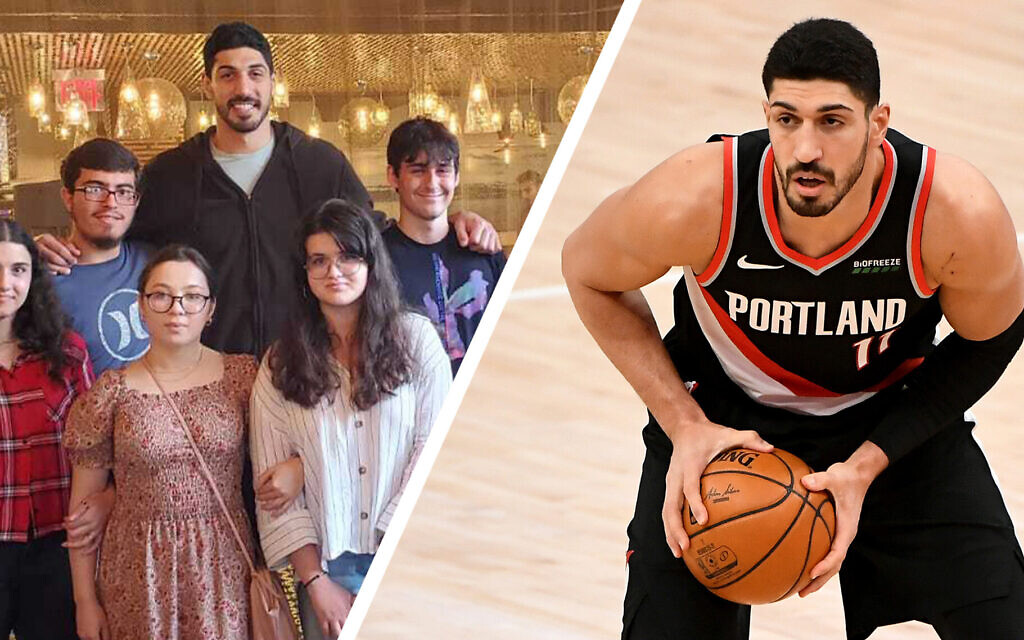 Kanter Freedom, who is Muslim, grew up in Turkey and played for five different NBA teams between 2011 and 2022. Over the last couple of years, he has become outspoken about human rights violations in Turkey and other parts of the world, including China, whose treatment of the Muslim Uighur people has been described by the US State Department as genocide.

The Holocaust education program being taught at Amity is underwritten by The Blue Card, a non-profit that assists Holocaust survivors, and the Turkish Cultural Center of New York. The curriculum was created by Mehnaz Afridi, a professor at Manhattan College who directs its Holocaust, Genocide & Interfaith Education Center.

Afridi, who is Muslim, teaches the students about the Holocaust, starting from the roots of antisemitism in Europe to the horrors of the death camps to modern-day parallels, including Islamophobia.

“Unfortunately, there is very little education [about] the Holocaust in many Muslim countries,” Afridi told the New York Jewish Week. “Our students’ memory is only of Israel and Palestine. I really wanted to shift that, to show that Jews and Muslims are very much alike.”

Suleyman Aydogan, a board member of the Turkish Cultural Center of New York, said that he noticed antisemitism from Muslim citizens and immigrants who came to the United States from Pakistan, Afghanistan and other Muslim countries.

“Some Muslim students in Europe even reject Holocaust education,” Aydogan told the New York Jewish Week. “If there are stereotypes, I felt that it was my responsibility to do something and take action.”

Aydogan said he and the TCC teamed up with Blue Card to “form a team” of experts, rabbis and imams to arrange the curriculum. Aydogan then told Kanter Freedom, a friend, about Blue Card and the program.

“He immediately loved it,” Aydogan said.

Born in Switzerland and raised in Turkey, Kanter Freedom, 30, has aligned himself with Turkish dissident Fethullah Gulen, a defector who has been deeply critical of Turkish President Recep Tayyip Erdogan. Brooklyn Amity School is one of more than 100 Gulen-aligned private schools funded by his followers.

Kanter Freedom, now a free agent, used his NBA platform to speak out against Erdogan, which led to the Turkish government issuing a warrant for his arrest in 2017. He is now unable to go back to his country or even contact his family and friends there out of fear that they will be arrested or harmed by the government.

In an interview, he spoke to the New York Jewish Week about the Holocaust, his relationship with American politicians and of course, the NBA.

This interview has been lightly edited and condensed.

New York Jewish Week: Why is it so important to you to bring Holocaust education to this high school?

Enes Kanter Freedom: When I was 8 or 9 years old, I went downstairs to play with my friends and they were burning Israeli flags. They told me that “Israel is bad. Israel is evil. Jewish people are horrible. We should burn their flags. We don’t respect them.” And I remember I got so scared. I ran upstairs to my mom, and I was like, “Mom, all my friends are burning Israeli flags, they hate Jewish people, they told me that they are evil. What should I do?”

My mom said, “I’m not going to tell you what to do, but do not hate anyone before you meet them.” I promised myself that day that I’m not going to hate anyone, any group or any religion or any culture before I meet with those people.

And then I remember coming to America for the first time. I had a meeting with a Jewish friend for the first time; he was one of the nicest guys, who took me to this kosher restaurant and we ate one of the most delicious meals that day. And because it’s kosher, we Muslims could eat it, too. I was very comfortable, and I realized that the food, the music, the culture and religion is so close to each other. So in my head, I was talking to myself like, “Why all this hate?”

When I played for the Boston Celtics, the Israeli consul general invited me to Holocaust Remembrance Day. I remember it was so many people, but I was the only non-Jew, the only Muslim guy. A woman came to me and she was 90 years old. She was a Holocaust survivor. She said, “I have never seen a Jew this tall before.” I was like, “Ma’am, you’re so sweet, but I’m not Jewish. I’m Muslim.” And she said, “What are you doing here?”

I said, “Well, I’m here to learn, educate myself so I can educate people around me.” And she started to tear up. The things that I learned that day. I don’t care who you are — Muslims, Christians, Jews, Catholics; if you believe in God or don’t believe in God. I promised myself, I want everyone to know and learn and educate themselves about what happened,

You grew up Muslim. Can you speak about the Holocaust education you had growing up in Turkey?

When you grow up in Turkey, you immediately grow up antisemitic, anti-West and anti-Israel because of President Erdogan. Whenever he holds a rally and goes on live television, he always attacks Israel, the Jewish people and the West. That’s what breaks my heart the most. Our young generation in Turkey are growing up antisemitic. And that’s why I was like, “I’m going to break this.” I don’t care if you’re the president of Turkey or the president of the world, if you are spreading hate, I will fight against it.

Boston Celtics’ Enes Kanter Freedom’s shoes on the court during the second half of an NBA basketball game against the Toronto Raptors, November 10, 2021, in Boston. (AP Photo/Michael Dwyer)

Let’s talk about the parallels between Muslims facing oppression now and Jews living through the Holocaust. Can we compare both groups and maybe find a common ground between the two religions?

If you look at what’s happened in the Xinjiang area in China, America said it is a genocide [against the Uighurs]. During the Holocaust, not many leaders or countries said something that what was happening is unacceptable.

Right now, there are many Muslim leaders of many countries out there who cannot say anything about what’s happened in Xinjiang. It’s because of the economy, because of business and because they have so much money tied up in China. This is unacceptable. They are literally picking money over human lives.

So if we can educate our young generation about the Holocaust, they’re going to immediately think, well there’s another genocide happening in China right now in the Xinjiang area, and it’s unacceptable and we have to do something about this. That’s why it’s so important to educate people about the Holocaust so it won’t happen again, not just toward Jewish people, but other cultures out there in the world.

You’ve developed relationships with many politicians, liberals and conservatives. Are you worried when you see some American politicians flirting with the far right, which includes groups that hold antisemitic views and support authoritarian regimes? And do you hope that your relationship with them can change that?

If you are at that level, where you’re representing America, you have to care about human life. So whenever I sit down with a politician, we talk about Turkey, China, the Uighurs, Islamophobia, antisemitism, and I hope that my words can open their eyes and open their heart to what is going on in the world.

You’ve been speaking out against China. The NBA does big business in China, which was threatened when some executives spoke out against human rights abuses by Beijing. Has the NBA blackballed you for sharing your views?

Yes, 100 percent. The last 10 years I talked about the problems that happened in Turkey and the NBA was so helpful. [League Commissioner] Adam Silver texted me twice to my phone and said, “Enes whatever you need, let us know. We got your back. We are like your family.”

But then the last six or seven months, when I started to talk about the problems happening in China, unfortunately, 40 owners are tied up by around $10 billion to the Chinese government. The NBA does billions in business every year. They have jersey sales, shoe sales, endorsement deals, all coming from China. And unfortunately, when you talk about the problems that are happening in China, they are not going to like it.

I believe that they put a lot of pressure on the NBA to release me. Look at my numbers. Just last year when I was playing for the Portland Trail Blazers, we made the playoffs. I started all of the games and I averaged a double-double. You’re telling me all of a sudden, around seven or eight months later, I forgot how to play basketball? People laugh at this.

I had a conversation with one of my teammates. He was telling me, “Enes enjoy this year, because this is your last year. You are not going to get another contract after this.” But it is what it is because the things I talk about are bigger than myself, bigger than basketball, bigger than the NBA.

[In a March 22 interview with the New York Times, Silver denied the league had blackballed Kanter Freedom. “We spoke directly about his activities this season,” Silver said. “I made it absolutely clear to him that it was completely within his right to speak out on issues that he was passionate about.”]

Are there any talks with any NBA teams?

Trust me. We try to talk to all 30 teams and they all give us the same answer, “No.” I’ve been in the league for 11 years. I know I have a spot and I can start on most teams. But it is what it is. They just show their true color.

Someone has to expose them because now we see the hypocrisy firsthand. The NBA is going to do what is good for the NBA. The one thing we need to do is just to keep pushing, expose these companies, organizations and players, while fighting against hate and antisemitism around the world.