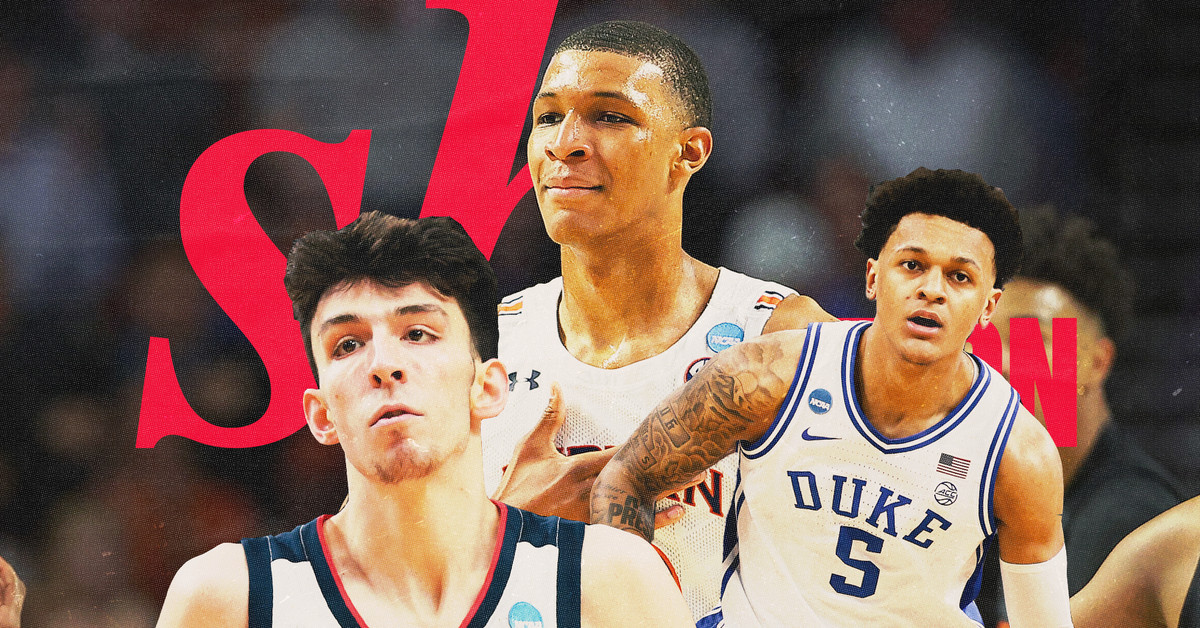 In most years, it’s pretty easy to identify who should be the No. 1 overall pick in the NBA Draft even if it eventually looks wrong in hindsight.

Last year, Cade Cunningham emerged as the consensus top player available — though Evan Mobley might look like the better long-term prospect after their rookie seasons. We had LaMelo Ball as our No. 1 prospect in 2020, but the Timberwolves went with Anthony Edwards first overall, which looks like a solid choice right now. In 2019, Zion Williamson was the clear-cut top pick, but after a few years it feels like No. 2 overall pick Ja Morant could ultimately have the most successful career in the class. In 2018, we were behind Luka Doncic all the way even though three teams ended up passing on him.

The 2022 NBA Draft doesn’t feel as obvious. There are four strong contenders for the top overall pick, and different teams could see this class in different ways depending on who eventually wins the lottery on May 17.

In our last mock draft, we had Paolo Banchero, Chet Holmgren, Jabari Smith Jr., and Jaden Ivey each rated as Tier 1 prospects. That means any of them could conceivably go No. 1 overall and we’d see the logic. Banchero has been our top prospect since the very start of the cycle. Here’s our extensive scouting report on why Banchero is No. 1 on our board. We also did a big breakdown of why we have Gonzaga big man Chet Holmgren at No. 2 overall.

We’ll have a new mock draft out after the lottery is complete. Until then, here’s who every team should take if they land at No. 1.

Yes, Holmgren or Smith would fit better next to Alperen Sengun, the young center who just had a very impressive rookie year for Houston. But for as much as we like Jalen Green, it feels like the Rockets still need a bit more creation potential. The Banchero x Green pairing could be electric offensively. Now surround them with high-level defenders who can shoot, and the Rockets could have their next great foundation. They wouldn’t have to move off Sengun immediately, but it might be the most prudent long-term move.

The Magic already have several quality young players in the front court with Franz Wagner, Wendell Carter Jr., and Mo Bamba. Bamba is entering restricted free agency this year and it’s easy to Holmgren as a natural replacement for him, but it might be foolish to punt on the former No. 6 overall pick now that he’s finally turned into a pretty nice player. We like the idea of adding Banchero to give the Magic another shot at a primary creator. Banchero’s ability to pass on the move at 6’10, 250 pounds gives Orlando a bigger playmaker and another dimension from what their guards (Jalen Suggs, Cole Anthony, and Markelle Fultz) provide. (ed. note: an earlier version of this story had Jabari Smith as the pick).

The Pistons already have their franchise player in Cunningham, and that’s part of the reason there’s no wrong answer with this pick. Any of the top four prospects feel like they’d be a great fit in Detroit. So why did we go with Holmgren? With Cunningham handling so much of the creation burden, adding a front court player who can space the floor and captain the defense with elite rim protection feels like the sharpest team-building move long-term.

The Thunder already have an awesome lead creator in Shai Gilgeous-Alexander, and a great connecting piece next to him in last year’s No. 6 overall pick Josh Giddey. Banchero, Holmgren, and Smith would each fit wonderfully with the OKC core, but we’ll give the edge to Holmgren for his defense and his length.

Banchero to the Pacers is one of my favorite hypothetical fits in the draft. The Pacers acquired a valuable young guard in Tyrese Haliburton who is an ideal fit as a secondary creator. They already have a stretch five in Myles Turner (if he sticks around), and a potential 3-and-D style wing in last year’s first rounder Chris Duarte. The Pacers are just missing a primary creator, and Banchero has a better chance than anyone else in this class to turn into that at 6’10, 250 pounds. The hometown kid Jaden Ivey would also be an excellent addition because of his speed and rim pressure ability in the backcourt if Indiana falls out of the top three.

Getting in position to land any of the top three bigs in this class would be a huge boon for the Blazers. There’s temptation to go with Holmgren here because Portland’s defense finished dead last this season — but their offense wasn’t much better at No. 27. I like the idea of pairing Banchero with Lillard in the short-term to create what should be an excellent two-man game. Banchero can eventually become Portland’s primary offensive option down the road, and his size and skill provides plenty of future team-building avenues.

The Kings’ path to being competitive feels more difficult after the midseason trade that swapped out Haliburton for Domantas Sabonis. We’d go with Banchero here if Haliburton were still around, but there’s positional overlap with the Duke forward and Sabonis. Instead, we’ll tab Holmgren over Smith for this choice to address the league’s No. 27 defense and add some more floor spacing to the perimeter. Given how the Kings have operated in the past under Vivek Ranadive, we fully expect Jabari Smith to be the pick if the Kings actually landed at No. 1.

Banchero and Zion Williamson aren’t a natural fit together, so the Pelicans move to Smith or Holmgren here in the event they land the first pick. It’s possible that reintegrating Williamson will only make things harder for a Pelicans defense that finished No. 20 this past season. Holmgren will be able to able to help on that end with his elite rim protection, while also having the ability to space floor for drives by Williamson and Brandon Ingram. Smith or Ivey would also be great additions here.

It feels like every top prospect fits nicely in San Antonio. Smith would add a nuclear shooter to a team that finished No. 29 in three-point rate. Holmgren potentially provides enough floor spacing to play alongside Jakob Poeltl, which would give the defense two elite rim protectors. Still, I’m going with Banchero here. It feel like the Spurs’ offense needs a little more creation next to Dejounte Murray, and I love the idea of the Seattle natives forming a dynamic two-man game down in Texas. A Murray-Banchero pairing would certainly need a lot of shooting around it, but the Spurs can figure that out later.

This one comes down to Banchero vs. Smith for me with the Wizards now invested in Kristaps Porzingis in the front court. We’ll go with Banchero, who would form a nice pick-and-roll combination with Bradley Beal in the short-term and take over as Washington’s primary initiator in the long-term. Washington could quickly build a massive, versatile lineup with Kyle Kuzma, Deni Avdija, Kentavious Caldwell-Pope, and Porzingis around Beal and Banchero.

The Knicks would have a fascinating choice if they finally get some lottery luck. Holmgren’s elite defensive ability would intrigue head coach Tom Thibodeau, but there’s some overlap with free agent center Mitchell Robinson, who the team may want to keep around. Banchero is often comped to Julius Randle. Smith would provide some badly needed shooting for a team that finished No. 29 in three-point attempts. Jaden Ivey would also be a much needed injection of speed and creation potential in the backcourt. I’m pretty torn on this one, but lean Holmgren for his length, floor spacing, and the potential to get the defense back into the top-five of the league.

Charlotte has a star creator in LaMelo Ball and an explosive play-finisher in the front court in Miles Bridges. The Hornets have two glaring needs: a starting-caliber center and more defense. Holmgren checks both boxes. While Holmgren might be more comfortable at the four early in his career, his length and rim protection would be a massive boost long-term for Charlotte. A foundation with Ball-Bridges-Holmgren would be among the best young trios in the league.

The Cavs already have their front court of the future locked down with Evan Mobley and Jarrett Allen. That means this pick comes down to Smith vs. Ivey. There’s convincing cases for both players: Ivey’s speed and rim pressure would be a great complement to Darius Garland’s skilled pick-and-roll playmaking. Smith would provide elite three-point shooting to space the floor around the front court stars. The Cavs slid Lauri Markkanen down to the three last year despite him being a natural four. Smith could be used the same way — while being a much better shooter.

Banchero is my No. 1 prospect, so I’m surprised Holmgren tied him. That just speaks to Holmgren’s combination of length, defense, and floor spacing fitting into almost any context.

This is our most recent mock published after the conclusion of the NCAA tournament on April 5. This mock was mostly put together with “best available” from my personal board.