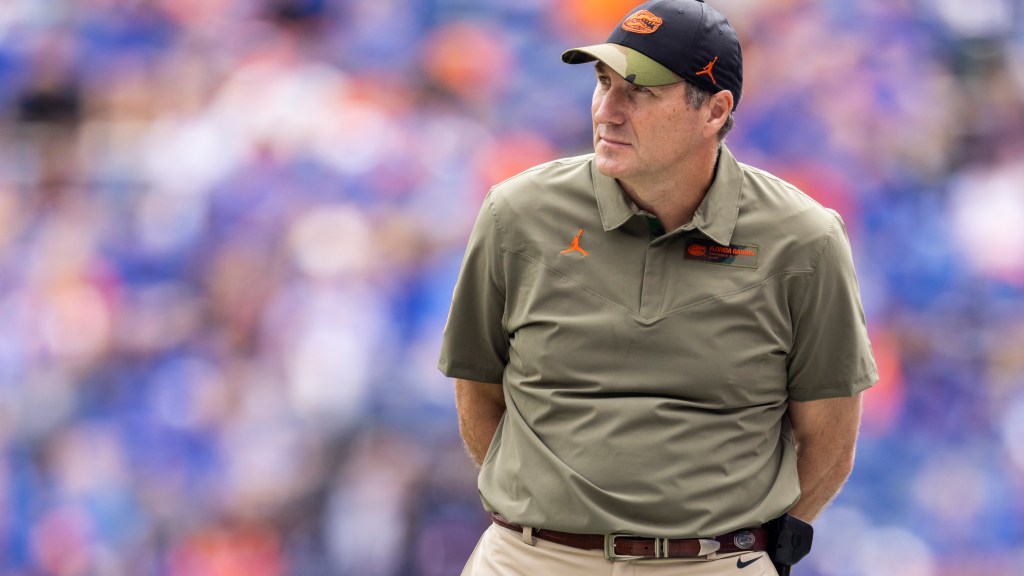 Florida won on Saturday, but it sure doesn’t feel like it. The team had to come from behind just to earn a 70-52 win over FCS Samford, who is 4-5 in the Southern Conference, and it allowed 42 points in the first half, the most in program history. The Gators have allowed 175 points in the last four games, their worst mark in a four-game stretch since 1917.

After the game, coach Dan Mullen offered praise for the Samford offense.

“You’ve got to give them some credit,” he said. “They’re going to be a team that scores some points.”

Mind you, this is the same Samford offense that scored 13 points against Chattanooga just three weeks ago. In fact, Saturday’s game tied for the most points the Bulldogs had scored all year. No matter how hard Mullen and the team’s locker room celebration want to convince you otherwise, things are not good in Gainesville right now.

Florida is BUZZING after a huge W vs Samford

And that starts with the head coach. It’s difficult to justify firing a coach in his fourth season after that coach led the team to three straight New Year’s Six Bowls, but it was also hard to foresee such a prolific collapse for the team.

It’s hard to imagine Mullen returning to Gainesville in 2022 now, and it’s not just Gators fans with that sentiment. It’s now being echoed by the national media as well.

Sports Illustrated columnist Pat Forde said that he thinks the team’s performance on Saturday signals the end of the Mullen era.

And that leads to an increasingly inescapable conclusion: The Dan Mullen Era has crashed and cannot be revived. It’s over. He may finish the season but he cannot carry on into 2022 in Gainesville with any kind of enthusiastic backing. The way Florida played Saturday, it shouldn’t be favored in either of its final two games (at Missouri and home against Florida State). A losing record at a blueblood SEC program in Year 4 is an invitation to find other work.

All the signs of crisis are there, and there is deafening noise in the proverbial system. Mullen sticking his fingers in his ears and humming so he can’t hear it won’t lessen the volume or intensity. And eventually, it will be time to face the music. If ever a win can signal the end of a coaching tenure, this was it.

In USA TODAY Sports columnist Dan Wolken’s “misery index” piece, he ranked the Gators right atop the list. He also had even harsher words for Mullen than Forde.

No, Dan Mullen, you do not get to celebrate a 70-52 win over Samford like you won an SEC title. You do not get to pretend like all is well with your underachieving program. You do not get to live in a world of denial after your team trailed 42-28 late in the first half against a 4-6 opponent from the FCS. “Calling a win a disappointment is disrespectful to the game,” Mullen told reporters.

No, Dan, sometimes it’s just reality and what’s actually disrespectful is trying to tell people they’re not seeing what they’re seeing. Look, it’s perfectly understandable that after the last month of chaos and criticism around the Florida program that there’s a moment of pressure release in the locker room after a win. There’s no point in being too harsh on the players who were shown on video dancing and having fun.

But Mullen’s words — not just Saturday but for several weeks now — suggest he’s derelict in his duty to make sure everyone in the program understands that 5-5 at Florida is not O.K. That failing to land a boatload of high-profile recruits from the state while Georgia cleans up isn’t O.K. That giving up 530 yards to Samford isn’t O.K.

Not everybody in coaching has to be Nick Saban. But do you really think Saban would come in after a performance like that and rationalize it with ridiculous excuses like “They score a ton of points?”

Maybe Mullen doesn’t think that ranting and raving about it will solve the fundamental issues, and that’s totally fair. And to be fair, Florida did fire two assistants last week including defensive coordinator Todd Grantham. But when your spiraling into mediocrity, tone matters and you can’t be dismissive or act like everyone else is crazy for bringing up obvious issues.

A large segment, and perhaps the majority of the Florida fan base has already checked out on Mullen despite making New Year’s Six bowl games in his first three seasons. The Gators’ last two games against Missouri and Florida State could say a lot about whether Mullen gets a fifth year in Gainesville.

Yahoo Sports’ Pete Thamel thinks that UF will wait until the end of the season to make a decision on Mullen’s future, but he thinks the outcome will ultimately be the same.

Don’t expect Florida athletic director Scott Stricklin to act rashly. There are games at Missouri and home against Florida State left, and the school has already fired two veteran coaches — DC Todd Grantham and OL coach John Hevesy — leaving no obvious interim. Mullen is also the play caller, and no one on staff has close to his experience with that. There will be a final evaluation at the end of the season, but this is headed exactly where it appears.

Florida is flailing, and at the start of a three-game referendum on their coach’s future, Florida’s defensive players did nothing demonstrably to show they wanted him back. They yielded the most points an SEC school ever allowed to an FCS program, the strategy of firing a coordinator in-season backfiring. With 31-year-old linebacker coach Christian Robinson thrust into the awkward position of calling the first game of his career, there was no discernible bump in energy or effort.

Parting ways with Mullen isn’t untenable. We’ve reached the point in the SEC — and college football in general — where paying $12 million to fire a coach isn’t even considered all that expensive. There’s no buyout incentive to keep Mullen, as he’d also get $12 million if he’s fired next year.

With Mullen’s future in the balance, his players answered the question on Saturday afternoon. They laid down for a historically bad performance. Much like Ron Zook’s tenure will be tied to losing to Mississippi State and Will Muschamp never got over losing to Georgia Southern, Mullen’s first half against Samford will reverberate in Florida infamy.

If the Gators had lost on Saturday, there’s a good chance the decision would already have been made by the time this story is published. Even with a win, Mullen’s standing remains largely the same.

This team is wildly underperforming and very quickly entered a complete spiral. The train is completely off the rails in Gainesville, and it seems unlikely Florida is able to get things back on track under Mullen.

It’s starting to feel like a matter of when, not if, UF decides to make the change.