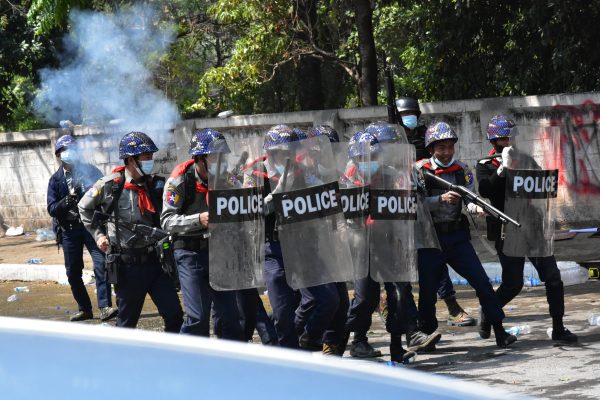 Black clouds twisting from the fire soar far into the sky, obscuring the mountains. Below, the hills, planted with red-roofed houses, show no signs of life, except for one thing: a young soldier of the Myanmar army stands with his arms folded, leaning against the grid of a hut overlooking the town of Thantlang. His weapon is propped upright on the floor, as if suspended motionless. Is his job completed?

A town of 8,000 people in Myanmar’s Chin State has been emptied of all its residents following a confrontation between the local self-defense force and the soldiers of the junta.

This prompted words of condemnation from the U.S. State Department, while New York-based Human Rights Watch on Sunday accused the army of committing a “crime against humanity” for setting fires, firing heavy artillery, stealing property, as well as killing civilians and raping women.

Some have compared this campaign to the infamous clearance operation in the Rakhine State against the Rohingya minority, and interpreted it as a genocide.

The army spokesman, Maj. Gen. Zaw Min Tun, claimed that “military responded to the attack launched by the PDF (People’s Defense Forces).” He added that it was the PDF that had “burned their homes while retreating.”

His statement was widely transmitted, soaking into the social media, where rank-and-file soldiers could express their anger against the PDF, which the Tatmadaw has labelled a terrorist group.

The debris of burned houses in Chin State. Photo delivered by special arrangement.

Until recently invisible even in Myanmar, let alone the rest of the world, Thantlang stands now for one more point of resistance. Crimes that in the past could have been concealed are today much easier to examine thanks to satellite imagery. So far analysts have gathered evidence of the burning of at least 200 homes; however, access to the victims remains very limited. Many have crossed into India’s Mizoram.

Since May, Chin State in Myanmar’s northwest has been a bastion of armed resistance, launching sometimes coordinated attacks against the military.

Working toward restoring its power and a semblance of stability, in many of the region’s towns, the military managed to reopen some schools despite continued fighting with civilian resistance groups.

On the other hand, the Chin people have vowed to resist the Myanmar generals.

The Battles Go On

The recent cases of rape committed by the junta’s soldiers consolidated communities across the country, motivating them to fight until the generals are overthrown.

Importantly, the slogan, “Myanmar’s anti-coup forces [are] more united than ever,” resonates broadly both among the people holding guns, and those only hitting their computer’s keyboards to reach out the world.

In the northern Sagaing Division, the situation might look calm in some townships, while others are subject to assaults from helicopters. Around 30,000 people have been forced to flee.

Many trained fighters are still waiting for help from the National Unity Government (NUG), which recently announced the formation of a command structure to coordinate between civilian resistance forces and allied ethnic armed organizations (EAOs).

The lack of proper weapons has also been holding the fighters back. To that end, the NUG has just announced that they aim to support a new People’s Soldiers Production Team to produce weaponry at one-sixth of the current cost. The group will be led by graduates from the military’s Defense Services Technology Academy who joined the resistance movement.

Myanmar’s protest movement has turned into an armed resistance; yet some civilians continue to express their pro-democracy support at rallies like this one. Photo delivered by special arrangement.

However, despite the calls for unity, some ethnic armed groups remain divided on their stance toward armed conflict.

In Myanmar’s northwest, the Shanni Nationalities Army (SNA) attacked a military ship loaded with jade sailing down the Chindwin, the country’s second longest river – yet all their rocket-propelled grenades (RPGs) failed to explode. It was a fitting metaphor for a group that is torn on whether to join the fight.

Some of the SNA’s leaders prefer to remain bystanders, defending the status quo, which is a result of the military’s decades-long policy of divide and rule.

Shanni people, one of Myanmar’s ethnic groups, have unique customs and language, but have suffered identity suppression, which they explain by pointing to the history of losing their territory to Kachin people following the signing of Panglong Agreement in 1947.

Consequently, in the past the Shanni people welcomed the presence of the Tatmadaw troops in their own areas to stand against the Kachin Independence Army (KIA). Today this history complicates forming a united front against the junta. Some Shanni elites want to maintain their good connections with the Myanmar army, rather than step out of line.

Also, up in the hills, the National Socialist Council of Nagaland-Khaplang (NSCN-K) – which is committed to fight for independence of the numerous Naga tribes scattered over the borderlands of India and Myanmar – has not taken up arms, despite calls to do so from ordinary people.

On top of that, the People’s Liberation Army of the Communist Party of Myanmar is back in the game after three decades of hibernation. It is currently conducting military training with the help of the KIA.

In northernmost Kachin State, the KIA itself has reportedly captured three military outposts around Hpakant Township, home to Myanmar’s billion-dollar jade industry. While the KIA has been very supportive in training resistance fighters outside of its traditional territory, in Shan State warlords have not progressed in solving their own disputes.

Near Hsipaw Township, the Reconstruction Council of Shan State (RCSS) and the Shan State Progressive Party (SSPP) have forced people to serve as laborers, proving that no negotiations can bring these movements to join the united front.

In Lashio, the capital of Northern Shan State, which is just two-and-a- half hours away from China’s border, the Myanmar National Democratic Alliance Army (MNDAA) edges forward step by step, clashing against the Tatmadaw. In this case, the fighting is driven not by the aim of restoring democracy, but due to MNDAA’s own interest in undermining the presence of junta’s forces in that area.

Meanwhile, civilians continue to be displaced by the fighting, regardless of the cause. Those ethnic communities that do not have their own armed groups (such as the Lisu) are particularly vulnerable to displacements.

In Southern Shan State and the country’s smallest Kayah State, the junta has reportedly used civilians as human shields. Recently, more than a dozen blindfolded and rope-tied civilians were forced to march ahead of a military column.

Known well for its strong resistance against the Tatmadaw, the Karenni People’s Defense Force was able to defeat the military in some clashes and even form an independent police force. Yet even in this region, the junta reacted to the armed resistance by burning villages and deploying aircraft.

Meanwhile, the military junta is constantly being attacked by the Karen National Liberation Army, the armed wing of the Karen National Union (KNU), fighting flares in the areas where the Border Guard Force is strengthening its offensive against the KNU. The BGF constitutes one more symbol of the Tatmadaw’s divide and rule policy. Formed by former insurgent groups, they are under the command of the Tatmadaw, receive salary as regular soldiers, and operate in areas assigned by the Myanmar army.

In traditionally restive Rakhine State, the peace that was sealed exactly one year ago is being put into question by clashes between the Tatmadaw and the Arakan Army (AA).

The recent release of 15 Myanmar captives, which coincided with a visit of Japan’s special envoy, cools down fears of resumed fighting. Nevertheless, many report that the Arakan Army is sourcing additional weapons and might proceed with armed struggle when they think the time is right. The AA is believed to be in control of three-fourths of the entire state.

Is the Myanmar Army Getting Overstretched?

The Ministry of Defense of the anti-junta National Unity Government releases regular updates on casualties, arrests, other crimes, and the progress of the movement as a whole. The number of resistance fighters is hard to determine, yet at least the number of Tatmadaw soldiers seems to be decreasing, whether through killings or desertions.

More or less coordinated attacks from all sides, in urban and rural areas, in borderlands and center areas, have proved that the Myanmar generals currently ruling the country through the State Administrative Council (SAC), cannot effectively deal with surprise attacks launched either by PDFs or EAOs.

The junta is dealing with enemies able to cause serious casualties, determined to retaliate for all their sufferings, and often going after military collaborators in plainclothes.

Yet, at the same time, questions remain over accountability for the actions of the armed groups. While many Myanmar people compare their own resistance movement to the underground groups opposing the Nazis in many European countries during World War II, it is important to distinguish both situations.

Myanmar’s generals have been ruling with a heavy hand for decades. However, the desired demise of the power of the Tatmadaw might cause significant side effects to the broad population. A hypothetical new government will not be able to establish a solid security hold over all the country’s territory within a short span of time, especially when ethnic armed groups will notice a yawning void. New displacements and killings might happen if the leaders of ethnic armed groups fail to engage in a constructive dialogue, choosing to hark back to the past rather than build something new.

Pressed by their deteriorating livelihood situation, hundreds of people from different corners of Myanmar have recently been arrested in Thailand, after attempting illegal border crossings to find jobs.

Human trafficking, as well as the spread of weapons and drugs, is likely to get even worse. In addition, other crimes are likely to occur more frequently and on a larger scale as criminal groups start taking advantage of the turmoil.

As a result, the end of military rule might not immediately give birth to a safer reality – far from it. The resulting lawlessness might seriously undermine the revolution being waged in the name of creating a federal democracy.

As Martin Luther King once said, “Peace is not merely the absence of some negative force – war, tensions, confusion – but it is the presence of some positive force – justice, goodwill….” Even if the NUG succeeds in toppling the Tatmadaw, can Myanmar achieve peace in that holistic sense?