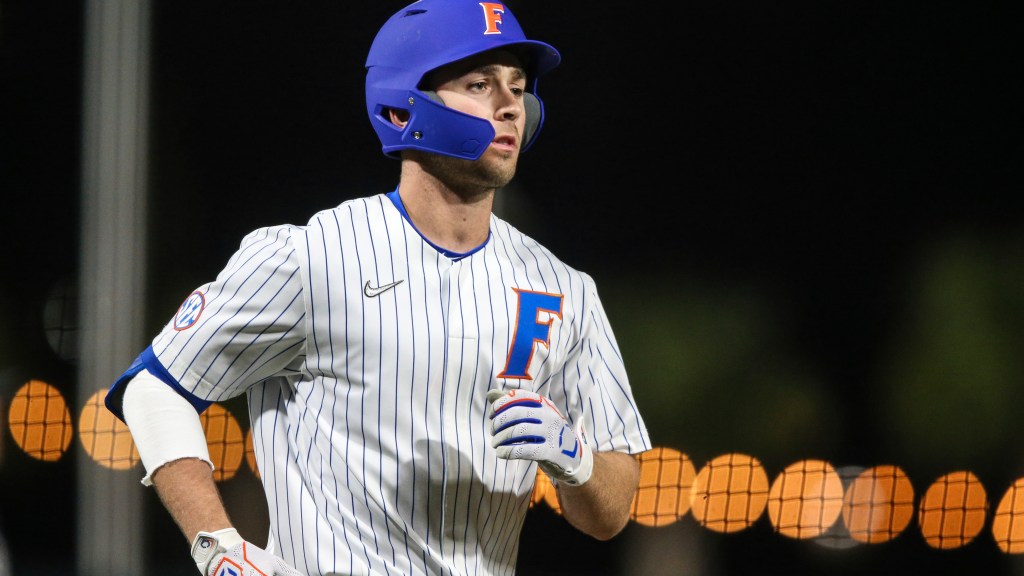 Florida baseball looked poised to cruise to another victory like Friday night until the fifth inning. Starter Brandon Neely gave up back-to-back singles and then Missouri first baseman Torin Montgomery launched a three-run shot to take the lead, 5-3.

The Gators left a runner stranded in the sixth, seventh and ninth innings as well as a pair in the eighth as they failed to overcome Montgomery’s three-run home run. The Tigers evened the series, taking the second game 4-3 on Saturday in Columbia, Missouri.

Neely only gave up four hits, one walk and one earned run before the fifth inning. Florida head coach Kevin O’Sullivan pulled him for Fisher Jameson in the fifth. Neely finished his outing, going 4 2/3 innings and allowing seven hits, four earned runs and a walk to go along with four strikeouts.

The Gators struck first to start the ball game. Left fielder Wyatt Langford recorded a base hit then second baseman Sterlin Thompson walked to push him into scoring position. After a center fielder Jud Fabian strikeout, catcher BT Riopelle singled through the right side to plate Langford.

Riopelle came in clutch for Florida once again in the third inning. He doubled to drive in Thompson who reached earlier.

Neely allowed a lead-off single in the fourth inning to Montgomery. Tigers’ catcher Mike Coletta then drove him in to decrease the Gators’ lead to 2-1.

Riopelle answered once again in the top of the fifth. He hit a sacrifice fly to drive in Langford who walked earlier in the frame.

Missouri then took the lead in the fifth inning via Montgomery’s three-run shot. The Tigers tacked on an insurance run in the eighth inning to take a two-run lead into the ninth, 5-3.

Florida failed to force the game into extra innings and fell to Missouri 5-3 on Saturday. The loss shatters the Gators’ six-game winning streak. Meanwhile, the Tigers broke a four-game losing skid.

The Gators will return Sunday for the rubber match at 2 p.m. EDT and can be seen on SEC Network+.