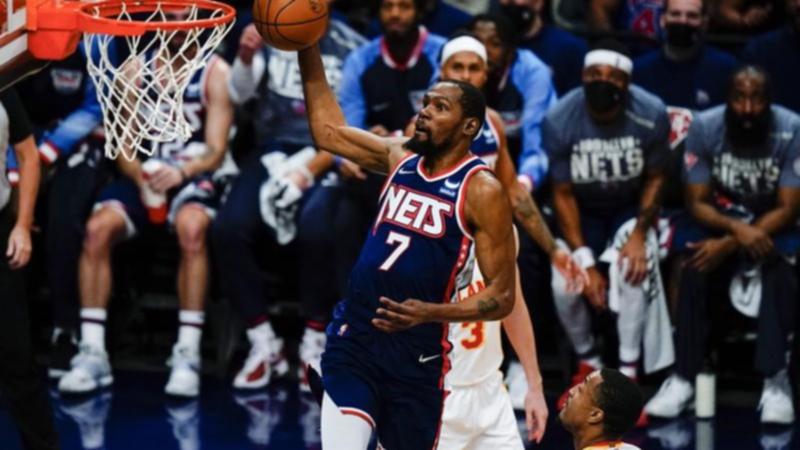 Patty Mills has surfaced again in a Brooklyn Nets squad packed with star power, the Boomers guard pouring in 14 points in a statement NBA defeat of Atlanta.

The improving Nets won 117-108, dominating the third quarter behind 32 points from Kevin Durant and a 16-point, 11 assist effort from James Harden.

Long-time San Antonio bench spark Mills has continued to elbow his way into the conversation at his new club, dishing out six assists and making five-of-nine three pointers as the Nets improved to 5-3.

Shooting at 52 per cent from long range across eight games – fifth-best in the NBA this season – Mills has continued on from the form that helped the Boomers to Olympic bronze to offset the absence of star guard Kyrie Irving.

Trae Young (21 points, nine rebounds, 10 assists) made just six of 22 field goals for the Hawks, while De’Andre Hunter shot at 90 per cent for his 26 points.

Joel Embiid had 18 points, nine rebounds and seven assists in his return to the line-up while Seth Curry scored 22 points and hit the crucial jumper to seal a fourth-straight win.

DeMar DeRozan tied a season high with 37 points for the Bulls (6-2) and grabbed 10 rebounds.

“A lot of guys have had this (COVID-19) and they are mad like ‘what the hell? I’m fine’. Tobias is not in that category. I can tell you that,” he said.

In Cleveland, Jarrett Allen collected 24 points and 17 rebounds to lift the Cavaliers to a 107-104 victory over the struggling Portland Trail Blazers.

Myles Turner scored 25 points, connecting on a career-best seven three-pointers, to go with 13 rebounds in the Indiana Pacers’ 111-98 victory over the New York Knicks while Fred VanVleet scored a season-high 33 points in the Toronto Raptors 109-100 win over the Washington Wizards 109-100 for their fifth consecutive victory.

Jaylen Brown scored 28 points as Boston used an 18-1 run at the start of the second half to rout Orlando 92-79 and the Los Angeles Clippers beat the Minnesota Timberwolves 126-115.